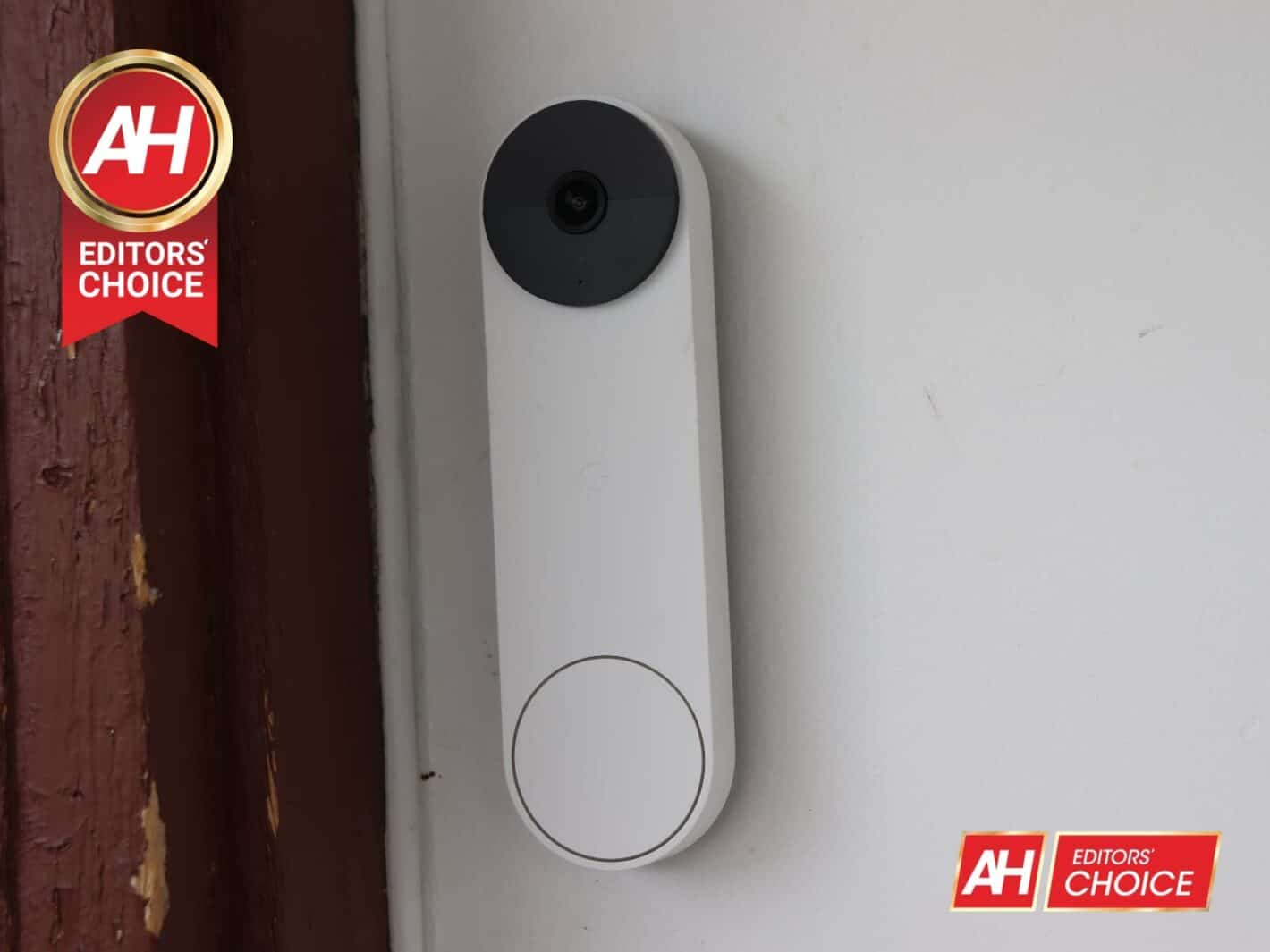 Our test unit was shipped out by Wasserstein along with half a dozen of the companies accessories for Nest cameras for another review. Our review of the Nest Doorbell (Battery) was written after several months of use.

Google’s solution for those who want a doorbell but don’t have the wiring for one in exactly the right place is the Nest Doorbell (Battery). As the branding implies, the doorbell runs off of battery power. And brings nearly all of the same features as the standard doorbell to the table. But it isn’t exactly the same. So when the opportunity arose to try out the Nest Doorbell (Battery) for a review, I immediately took it.

Now, as already stated, there are a few things the Nest Doorbell (Battery) doesn’t do that the wired variant does. Namely, capturing 24/7 video instead of just events or doorbell rings. But that doesn’t tell the whole story.

This Nest doorbell doesn’t require any wiring and works directly with other smart home devices. Such as hubs, smartphones, and speakers. So it also doesn’t require a chime. And there’s a lot to love about that but also a whole lot more.

So let’s dive into the Nest Doorbell (Battery) and see what makes this one of the best options around.

The build quality of Google’s Nest Doorbell (Battery) is one area where this gadget shined under review. Not least of all because it isn’t built from plastics. At the very least not for the part of the doorbell that’s visible. So it’s much more durable against marring from frequent use. And it feels a bit heftier too. Helping it to feel more premium despite its lower cost compared to the original wired version.

In terms of the single large button and built-in hardware for two-way communications, those appear to work better than before too. With a bit more clarity both for the person standing at the doorbell and for whoever happens to be answering the door. So while many attributes have stayed the same between the wired variant and this one, there appear to be some significant improvements in place too. 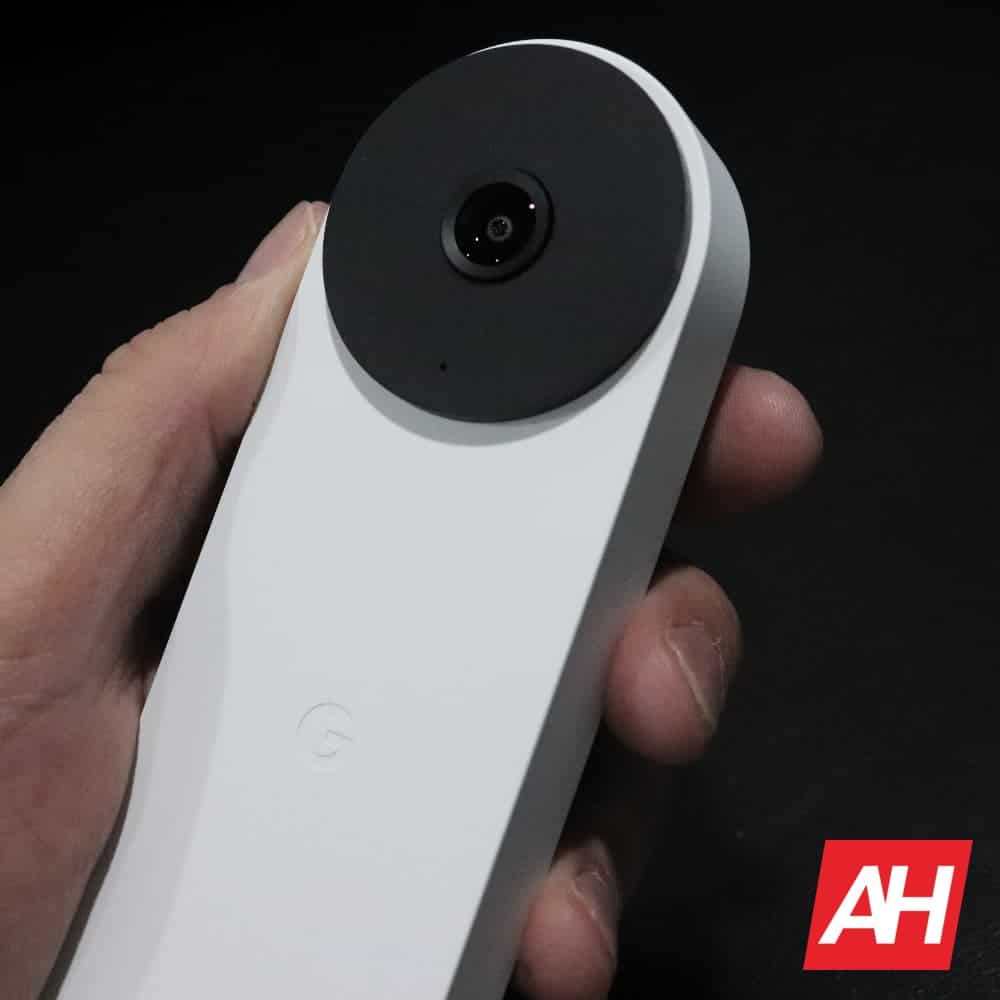 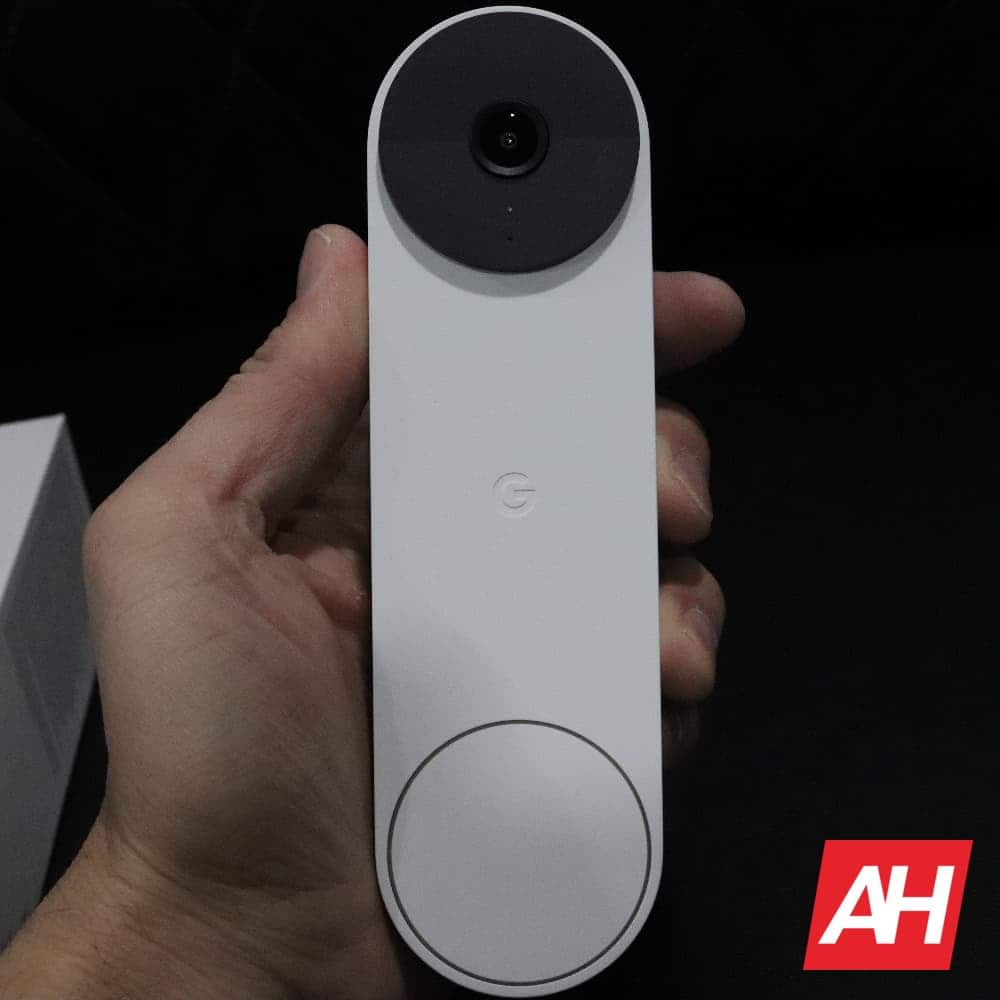 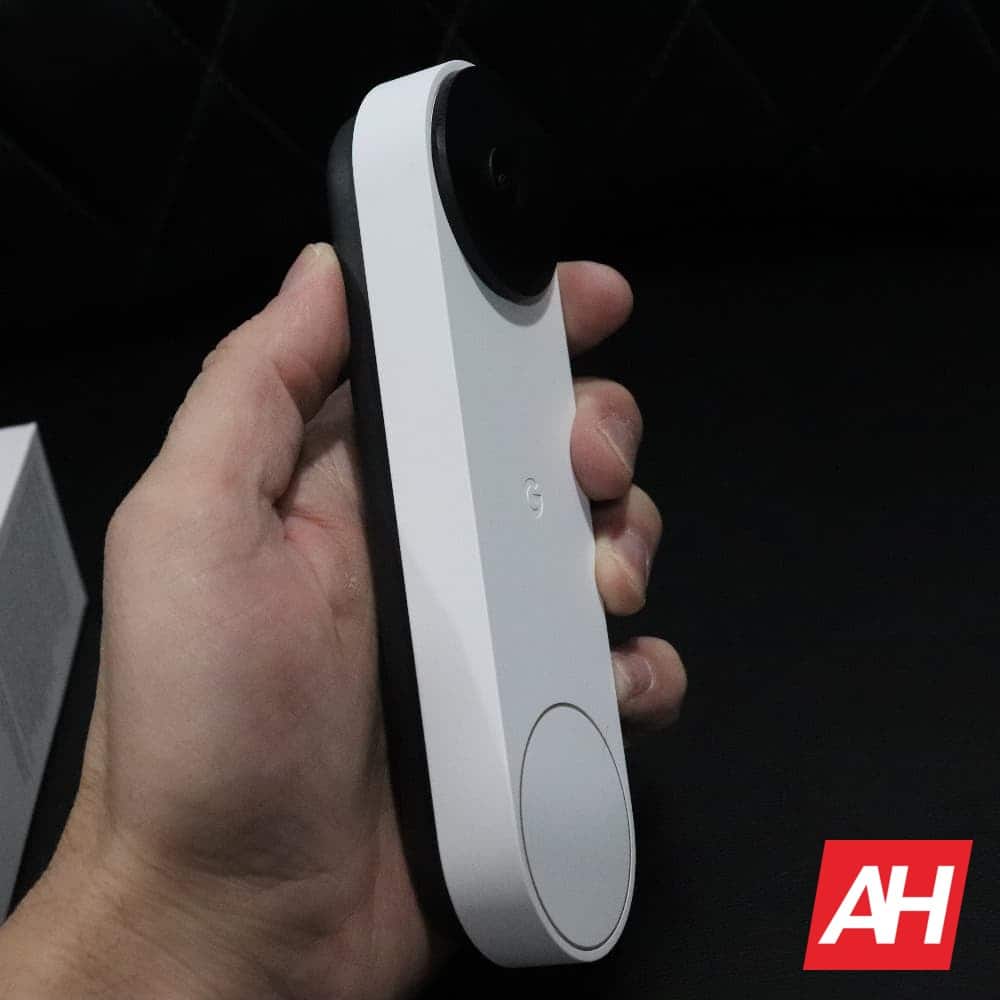 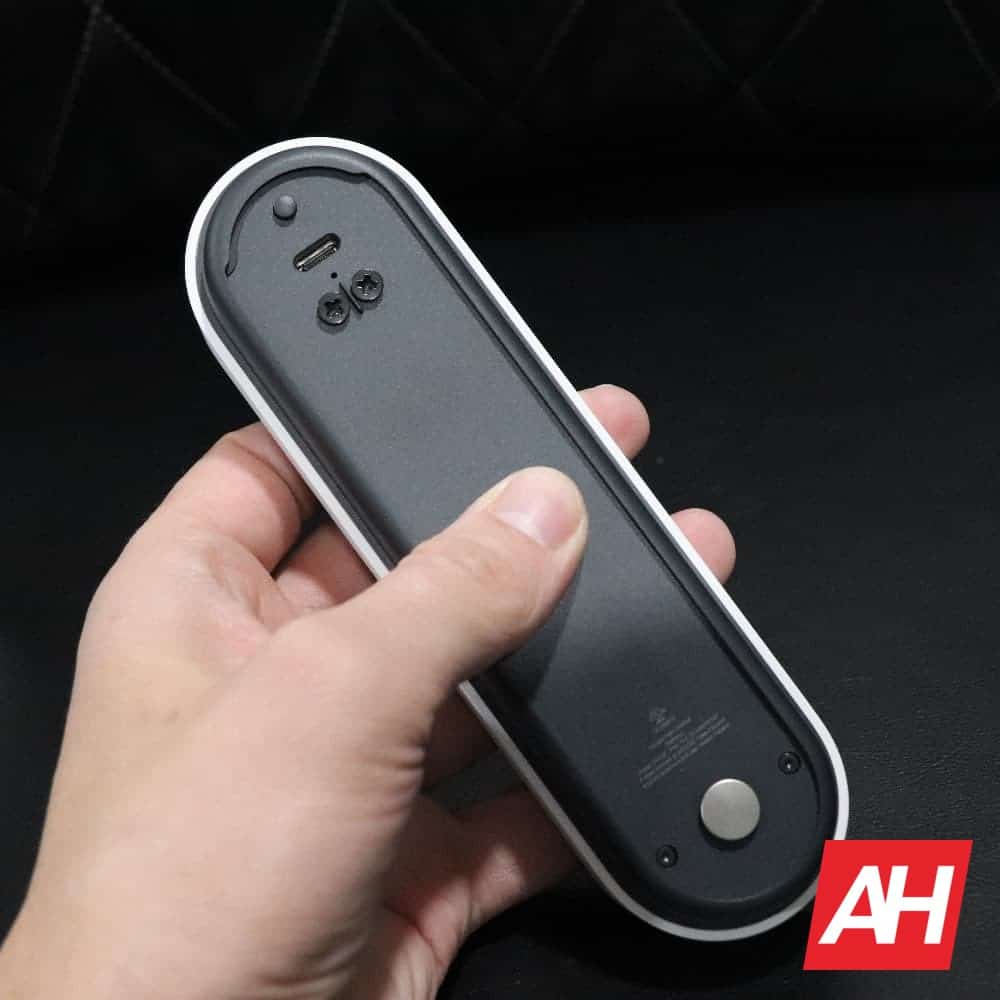 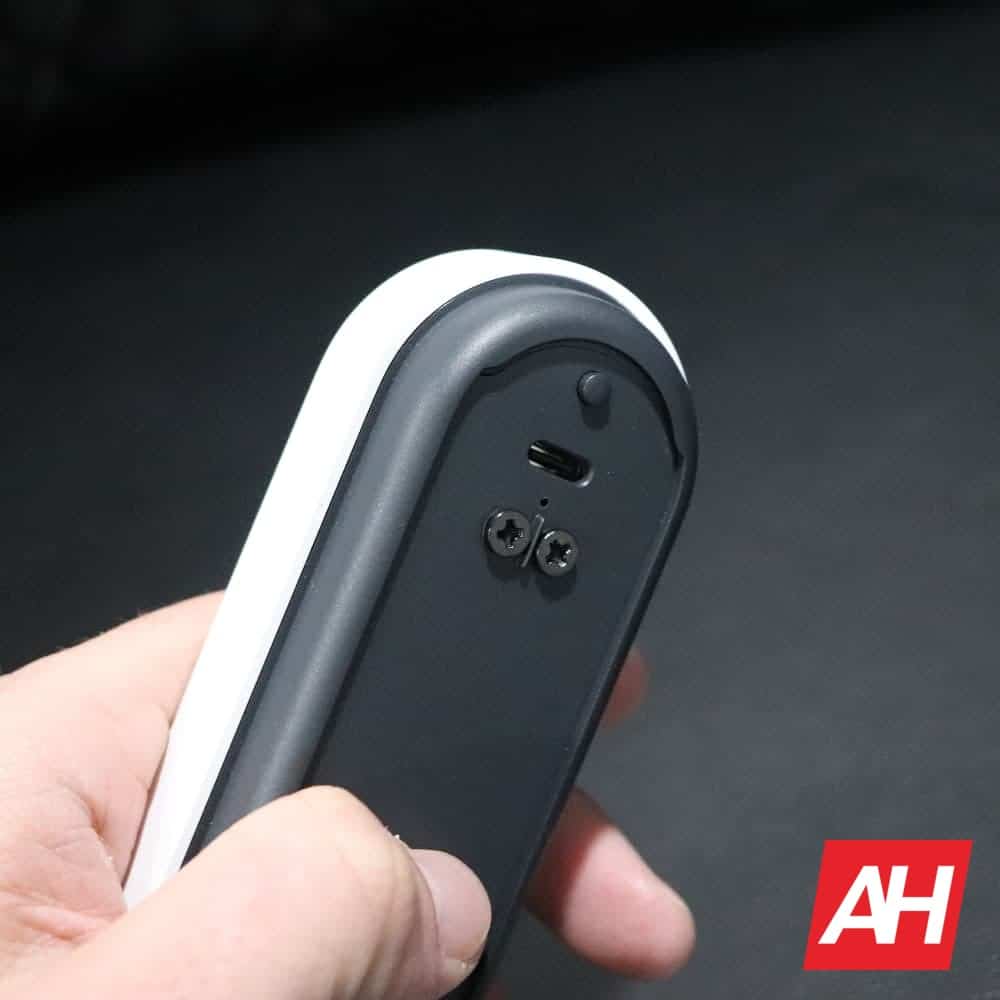 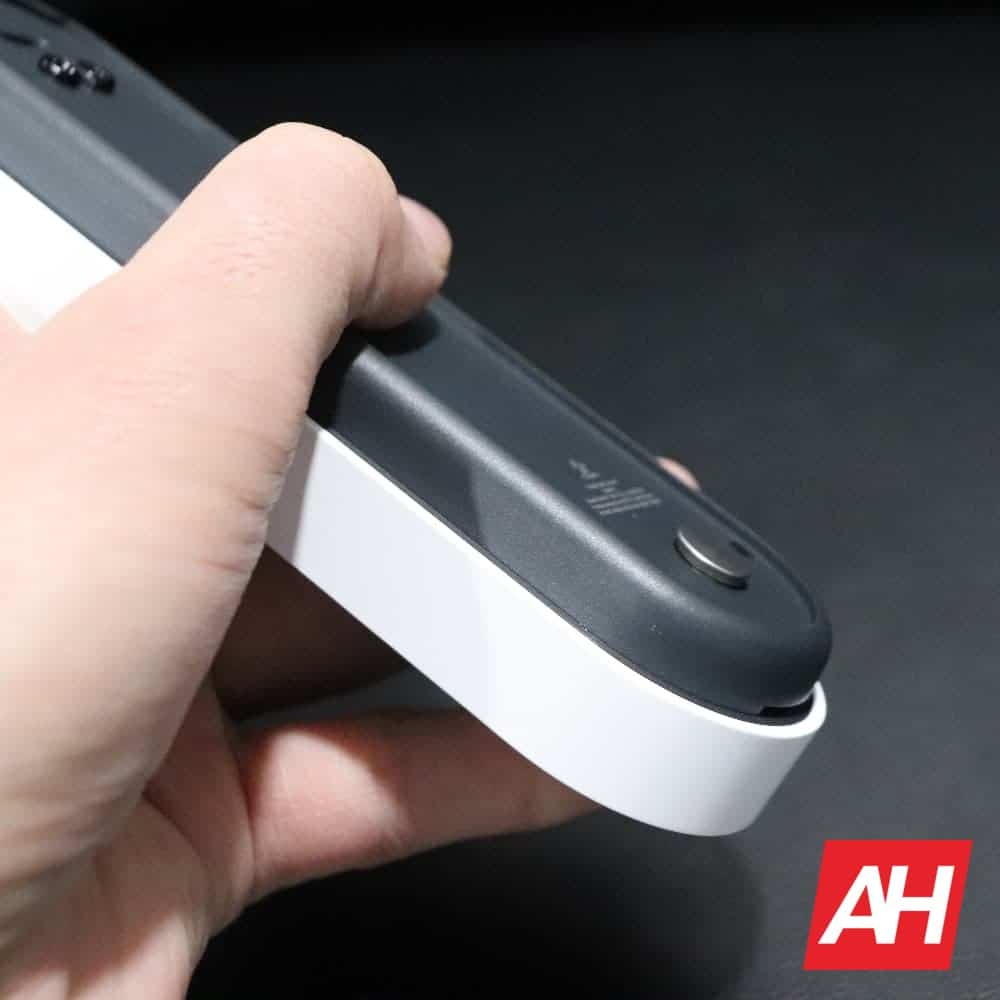 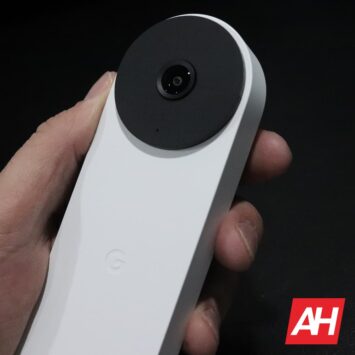 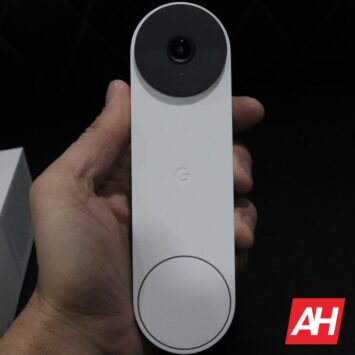 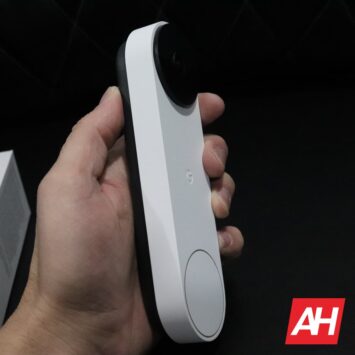 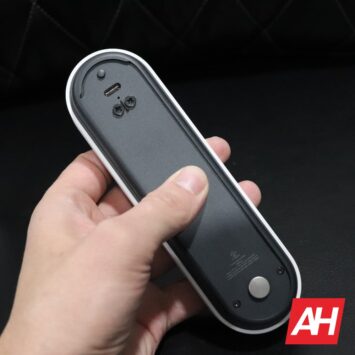 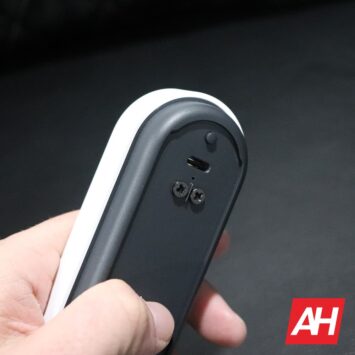 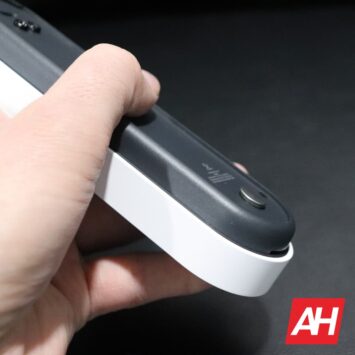 Of course, the charging port, found at the back of the device, is nice and ‘clicky’ as well. There’s no unwanted wiggle in that plug at all. The hardware that mounts the doorbell to the wall is sturdily built. The doorbell doesn’t jostle around or come loose when pried at. And there’s no chance it’s going to come off accidentally. Or under normal use.

That held true with the use of Google’s included angle mount too. The mount is meant to help adjust the camera angle to the left or right by up to 20-degrees.

There’s a special ‘key’ included with the doorbell for freeing it from the wall as well. Thankfully, the doorbell does come off incredibly easy using that. And without any strain or difficulty. That’s as long as it’s been installed — which we’ll talk about momentarily — with enough space above the doorbell itself.

Also found around the back are two screws. Those hold firmly in place as well, with no build quality issues. The screws are meant for wired configurations. Whether you’re wiring up to a wall where there used to be a standard doorbell or wiring up to a solar panel. Or a different accessory.

Of course, for a video doorbell, picture or image quality is paramount. And, unfortunately, that’s one area the Nest Doorbell (Battery) didn’t do as well as I might have hoped under review. That’s not to say it isn’t great quality, just for clarification. But it does drop things back a bit compared to the previous, wired iteration — the Nest Doorbell.

Comparatively speaking, the wired variant offers HD UXGA footage at 30 frames per second. And a better resolution of 1600 x 1200 pixels. The Nest Doorbell (Battery) comes in with the same framerate but with a resolution of 960 x 1280. Primarily because it draws from the battery for recording, it also won’t show live footage all of the time or save all live footage. Instead, it only saves events and only shows live footage when actively being watched. 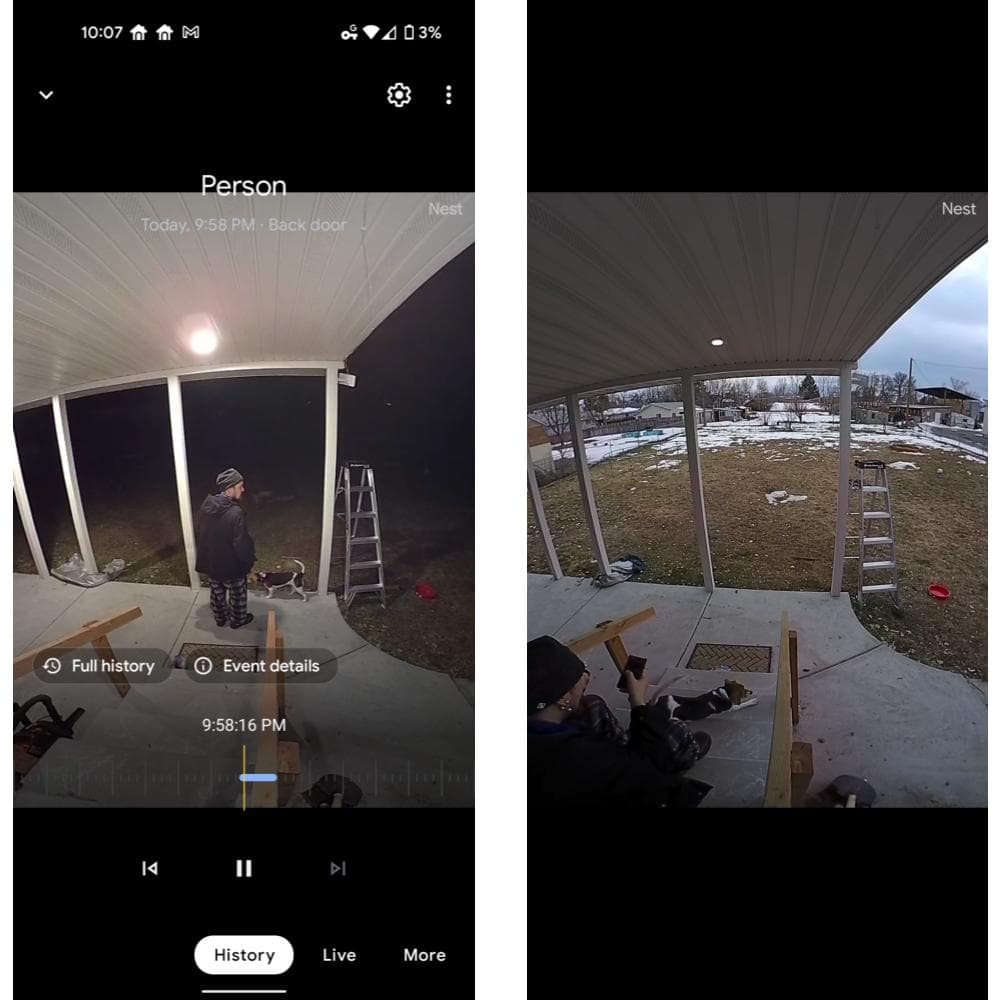 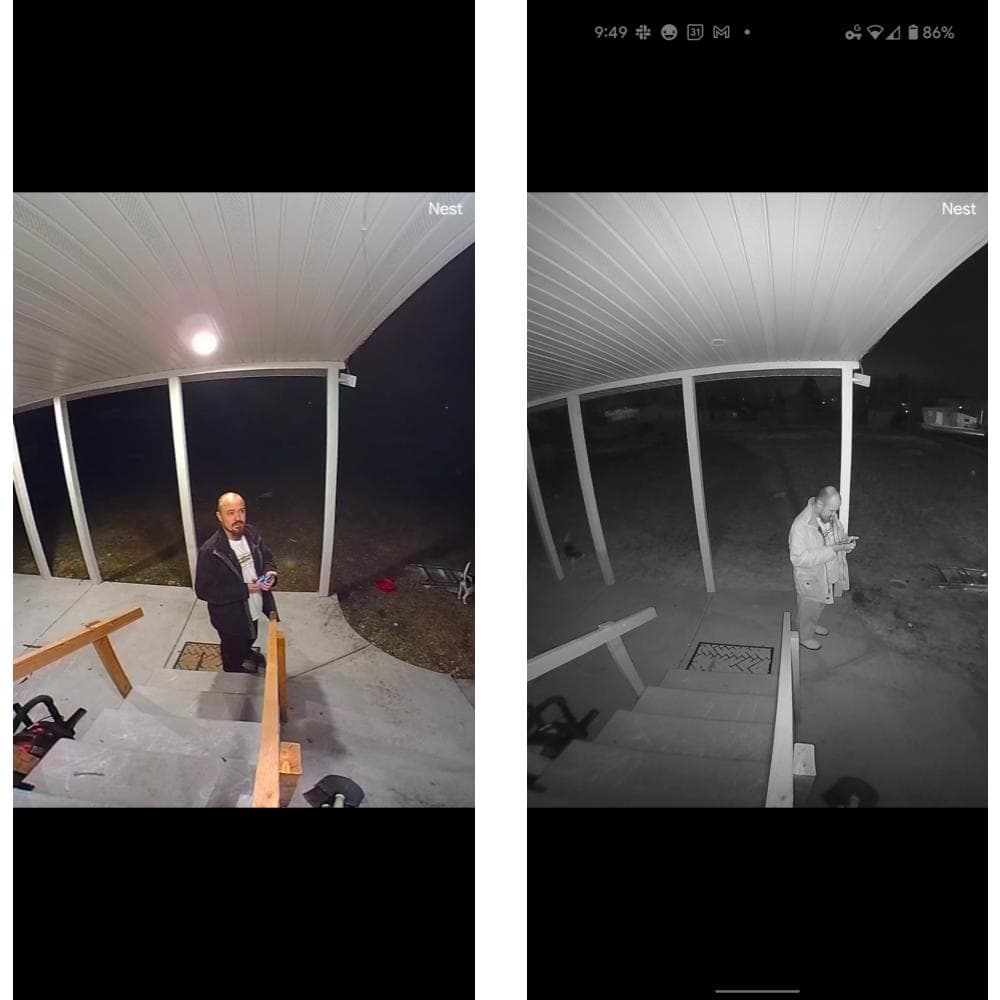 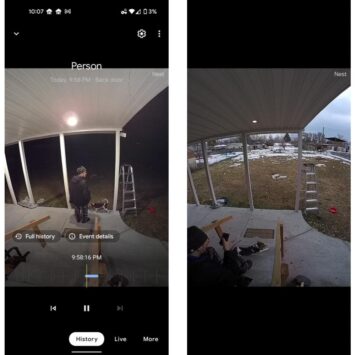 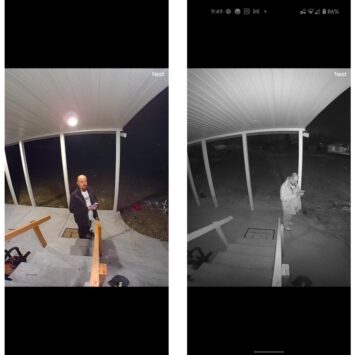 Night vision footage uses the same technology as the previous generation of wired doorbells from Google. So everything has effectively stayed the same on that front. Albeit at the same lowered resolution.

Moreover, the porch lights where we installed the camera, as shown in the images above, cause some serious artifacts. That only happened with lights that were directly facing the doorbell, under deeper testing. But is something to be aware of before purchasing. Since the blooms created often extend to significant portions of the footage.

In terms of usable resolution, though, it’s worth pointing out that this camera still works great. Especially since its primary purpose isn’t to take longer or wider shots. But rather to take images and clips of events. And to accurately detect and show footage of people, packages, pets, and motion — all of which can be tracked by the Google Home app and built-in software — from closer up. As they approach or pass by in front of a door.

So, ultimately, the lower resolution doesn’t really cause any issues in day-to-day use. At least compared to the wired version I already had installed previously.

Of course, the charging time and battery life wouldn’t typically be an issue for a doorbell. But the Google-built Nest Doorbell (Battery) does require some discussion on the matter. Particularly since it can but doesn’t need to be hooked up to existing wiring and chimes.

The built-in Nest Doorbell battery can, with an aftermarket 7.5W charger that isn’t included for my review — although a cable for charging is — be charged up in around five hours from dead. My testing showed that figure to be accurate. Although I ultimately hooked this up to a solar panel. So I didn’t need to charge it at all throughout most of my months-long review aside from when testing that.

In terms of battery drain, that’s going to depend on a number of factors, the battery is designed to last around two-and-a-half months. That number appears to be fairly on-point. However, it is worth noting that it won’t always hold true. Particularly given recently surfaced issues with cold weather.

As a result of how Li-Ion battery technology works, the Nest Doorbell (Battery) won’t charge at under 32-degrees Fahrenheit. It doesn’t work at all at under negative four degrees. Although my review did show that having a power source plugged in can keep the gadget going. Beginning to top the device up any time the temperature rose above that threshold. And extending the battery life significantly, depending on varying factors.

Summarily, for those in warmer climates or who experience warmer or shorter winters, wiring up this doorbell means it shouldn’t ever need to be taken down to charge. Whether via a high-quality solar panel or to your home’s wiring. But those who live in colder climates or who have longer winters may want to look at Google’s dedicated wired option.

Nest Doorbell (Battery) is fool-proof and features are fairly rich

Now, it would be easy to skip over any discussion of the installation process for Google’s Nest Doorbell (Battery). There are plenty of great features to discuss, although most have already been covered to a large extent elsewhere. But the ease of installation was undeniably one of the best features of the Nest Doorbell (Battery) during this review. Even without consideration for those others.

Not least of all, that’s because it took me less than five minutes to install the package. Including the time to open things up and find the video for installation. Google doesn’t include a manual but instead uses a QR code to a YouTube video for the process.

Once the video was running, it quickly became apparent that I’d only need a few short steps. Namely, measuring the doorbell height — since I didn’t already have a doorbell installed — before marking two holes and screwing the mount into place. I decided not to install the angle mount accessory that this doorbell ships with. The doorbell itself clicks into that easily and detaches just as quickly with the included tool, when needed, for charging.

Features and subscriptions haven’t really changed much for this doorbell, compared to other Nest or Google smart home releases. A Nest Aware subscription is required to get the most out of the doorbell. That nets subscribers 30-days of video event history — 60-days with Nest Aware Plus. But there’s no 24/7 video history — which is a thing with the wired cameras offered via Nest. But even without that subscription, a 3-day history is saved.

Footage from the Nest Doorbell (Battery) can also be viewed on Chromecast, Hub, a tablet, smartphone, or computer via the Google Home app. Which is a great feature to have since some cameras are more finicky about allowing access outside of a dedicated app. And, more directly, those are, as often as not, only available on mobile.

Should you buy Nest Doorbell (Battery)?

Now, one final worthwhile note about Google’s Nest Doorbell (Battery), as mentioned at the beginning of this review, is just how many accessories are available for it. For everything from vertical angle adjustments to powering the device without using your home’s power. And many of those are almost criminally inexpensive.

Taken in conjunction with all of the features and the build quality of the Nest Doorbell (Battery), there really shouldn’t be much argument. This is easily one of the best, if not the best video doorbell you can buy for the money. Especially if you don’t want to run new wiring for a doorbell.

There are, of course, some drawbacks to relying solely on a battery for power. And the fact that battery chemistry means this doorbell won’t gain any charge at under 32-degrees Fahrenheit. Setting aside the fact that it will drain faster the lower the temperature goes. But, even with temperatures staying at below 25-degrees during weeks-long stretches of this review, this doorbell didn’t die either.

That’s despite that a power accessory such as a solar panel won’t charge this up completely on a warm sunny day. The charge regained with any rises in temperature and the fact that it has such long battery life, to begin with, mean that it didn’t give me any issues. So unless you happen to live in a region that sees more than a few weeks with temperatures dipping below and staying below freezing, that shouldn’t be an issue.

And, in fact, that’s going to be the only circumstance where this doorbell isn’t easy to recommend.