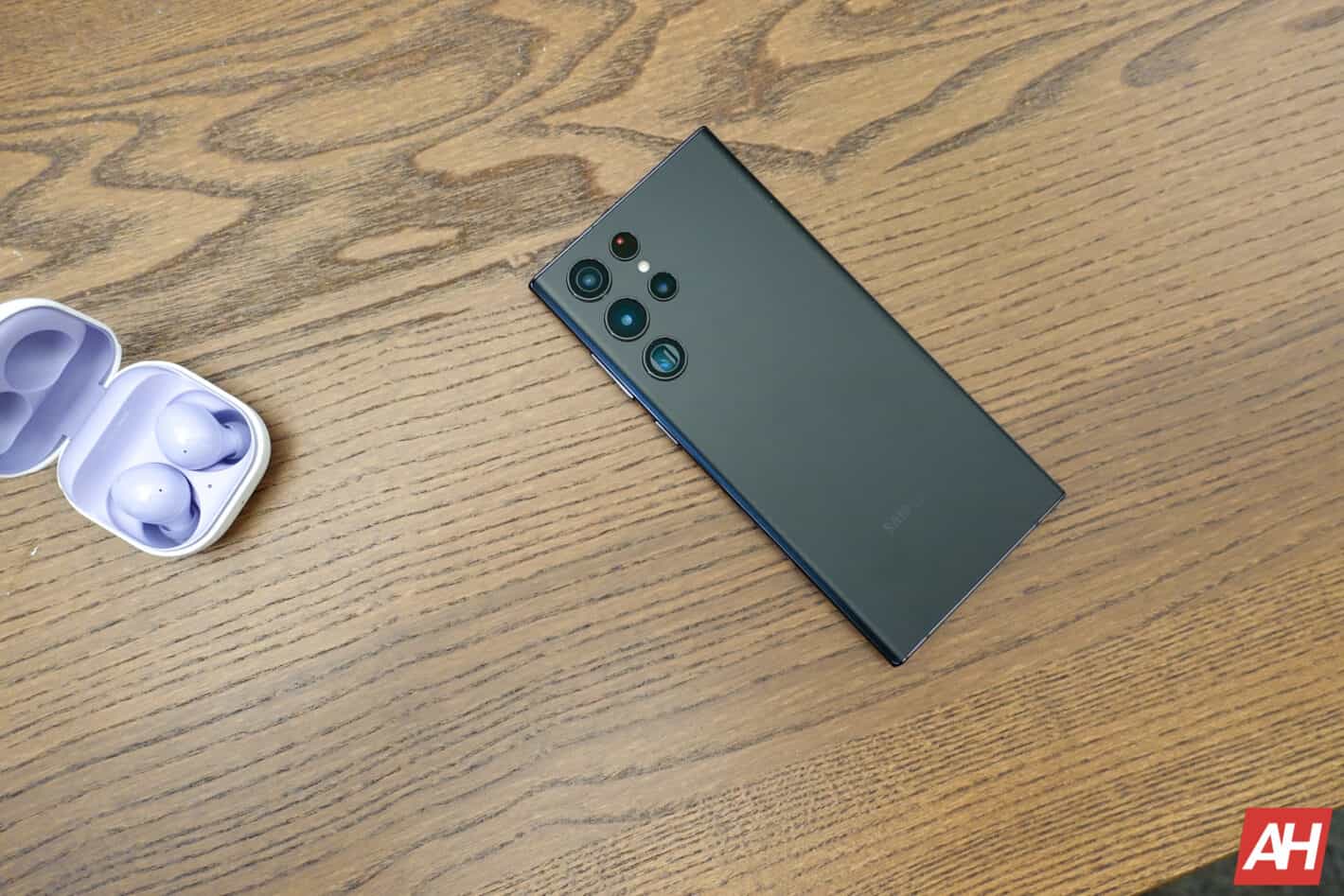 As most of you know by now, Samsung announced its new flagship smartphones and tablets yesterday. We already have plenty of content on all those devices, but new info just keeps on coming. We already talked about the Galaxy S22 Ultra and Galaxy Tab S8 series specs, if you’d like to check that out, and Samsung just published its own infographics for the specs of those devices.

If you take a look at the image provided below this paragraph, you’ll see an infographic for the Galaxy S22 Ultra. You can see the phone itself in this image as well, along with its detailed specs. 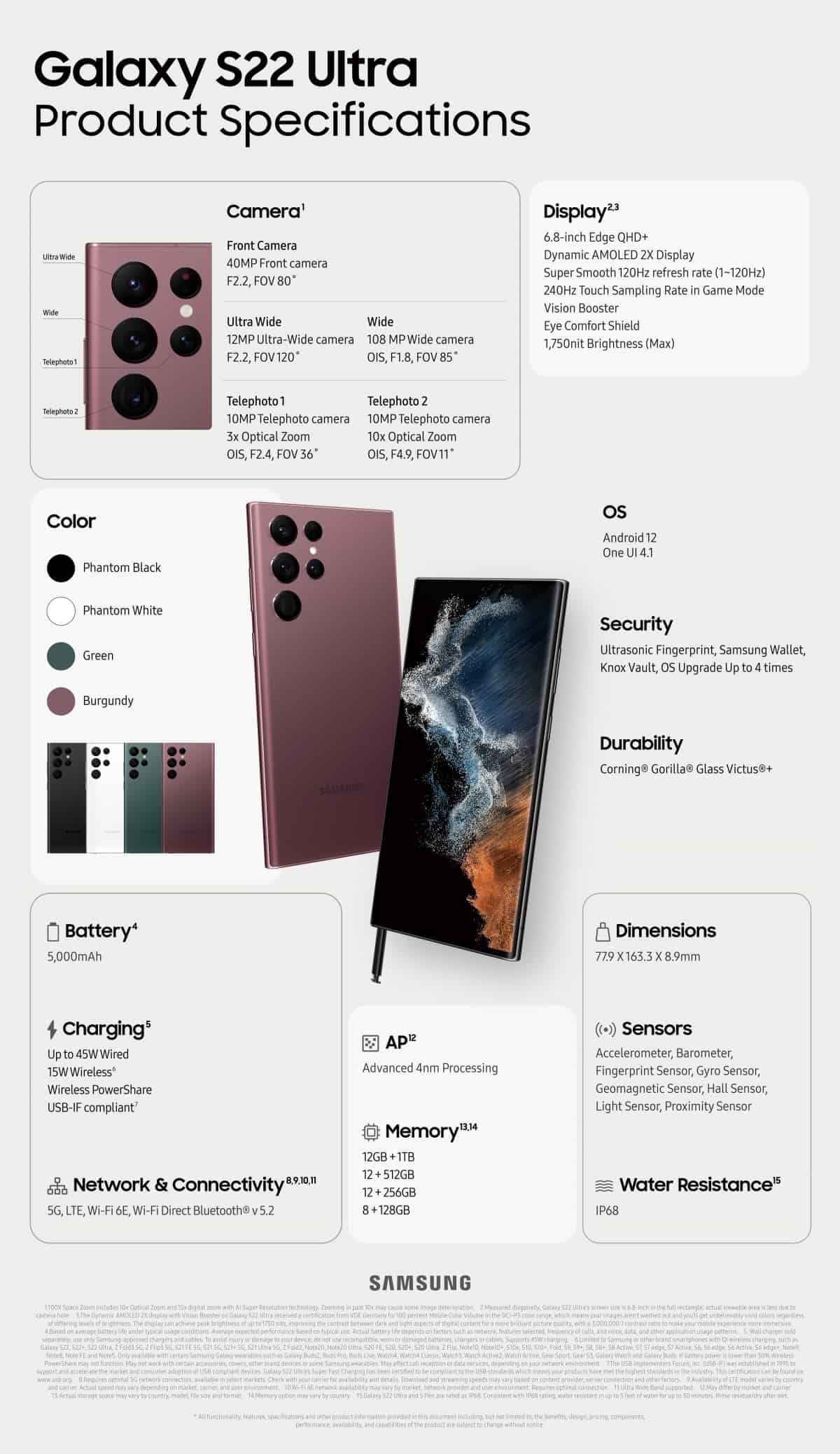 The Galaxy Tab S22 Ultra features a 6.8-inch QHD+ Dynamic AMOLED 2X display. That display is curved and it offers a 120Hz refresh rate (adaptive). This display also gets quite bright, at 1,750 nits of max brightness.

The Snapdragon 8 Gen 1 and Exynos 2200 fuel the phone, depending on the market. You can get an 8GB or 12GB RAM variant of the phone. The 8GB RAM model comes with 128GB of storage, while the 12GB RAM model is available in three different storage flavors.

The device is IP68 certified, while it ships with Android 12 and One UI 4.1. It comes in four general colors, and two that are exclusive to Samsung’s online store in some regions. It features five cameras as well, more about which you can read in the provided image. There’s more info to check out in that image.

The Galaxy Tab S8 series, on the other hand, looks mostly the same. The ‘Ultra’ model comes with a display notch, but other than that, the only difference in the design department comes down to size.

All three devices are quite large, but the ‘Ultra’ is by far the largest. If you take a look at the provided image below, you’ll notice that it has a 14.6-inch display. That is a WQXGA+ Super AMOLED panel with a 120Hz refresh rate. 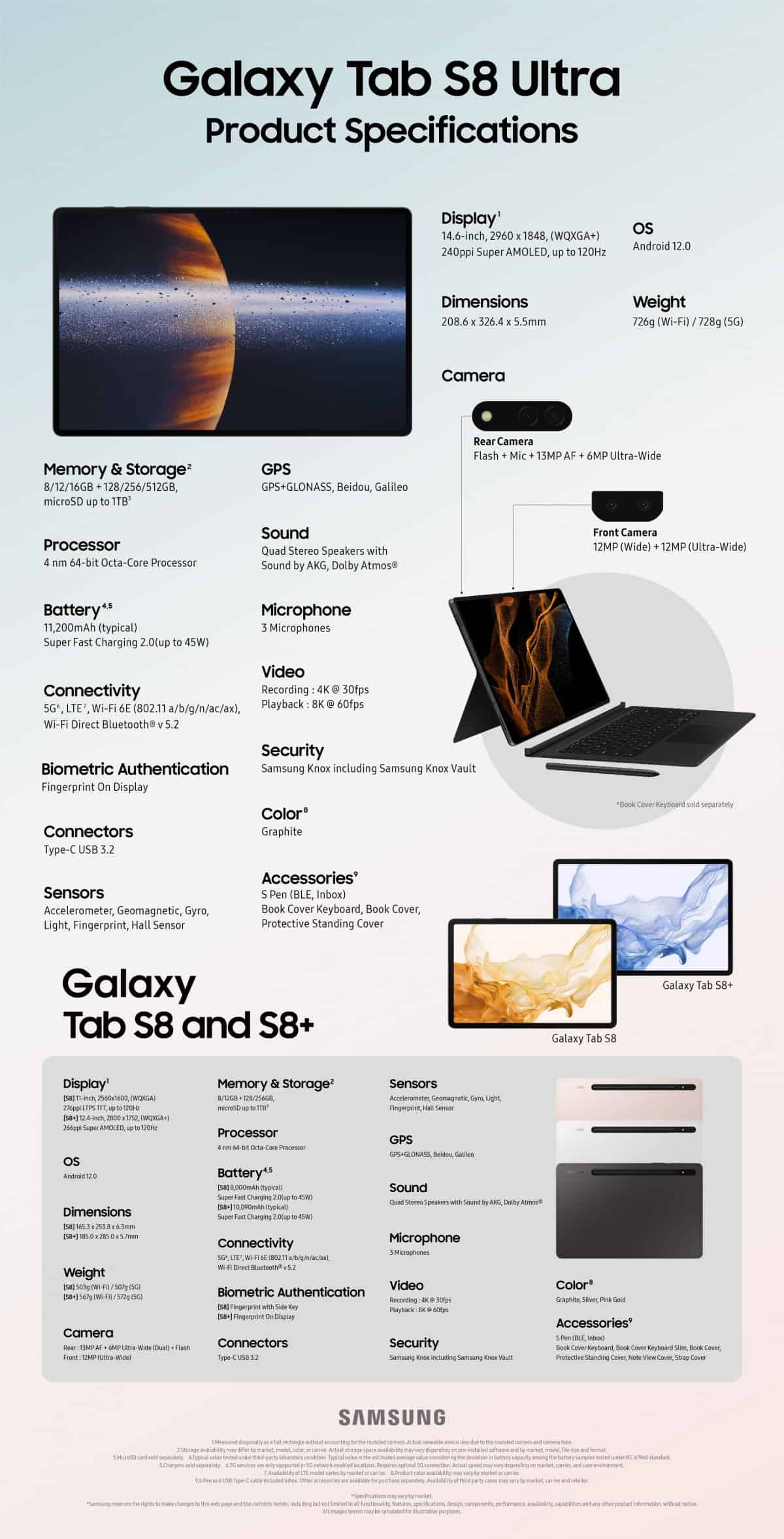 All three of these tablets ship with Android 12 out of the box, and are fueled by the Snapdragon 8 Gen 1 or Exynos 2200 SoC. All three tablets support 5G connectivity, and offer plenty of RAM and storage.

All three also come with the S Pen stylus, which magnetizes itself to them, and it also charges that way. There are quite a few color options you can choose from here as well. Check out the provided image above for more information.