The OPPO Pad surfaced in a first image before the weekend, and now several more renders appeared, along with its specs. The device was shown from the front, and if you take a look at the gallery below the article, you’ll see it from the back.

The OPPO Pad appeared in three renders, while its specs surfaced as well

As you can see, there are three images included there. They’re showing the OPPO Pad in black, white, and purple colors. We’re not sure if those will be the official names, though.

It seems like OPPO will use glass on the back, while a single camera will be utilized back there. OPPO is going for a boxier look, as the back side will be completely flat, as will the sides.

In regards to specs, Digital Chat Station, a well-known Chinese tipster, shared them. The OPPO Pad, if that ends up being its final name, will feature a 10.95-inch QHD+ LCD display with a 120Hz refresh rate. That will be a 10bit display, by the way.

The Snapdragon 870 will fuel the device, while you’ll be able to choose between 6GB and 8GB of RAM. Both of those models will include 256GB of storage, as that will be the only variant on sale, it seems.

It will support 33W charging, and a 13-megapixel main camera

An 8,360mAh battery was also mentioned by the tipster, and it will support 33W fast wired charging. Wireless charging won’t be a part of the package, it seems.

OPPO will include four speakers in this tablet, and they will be boosted by Dolby Atmos. WiFi 6 will also be a part of the package, while a 13-megapixel camera is said to be included on the back. An 8-megapixel snapper will sit on the front.

The tablet will weigh 507 or 510 grams, and be either 6.9 or 7.05mm thick. We’re not sure why two different thicknesses and weight categories are mentioned. Perhaps one of the color variants will offer different materials, or perhaps one will offer a SIM card slot. We’ll have to wait and see. UPDATE: a fourth image leaked by Abhishek Yadav, and it shows two color variants and the OPPO Pencil stylus. 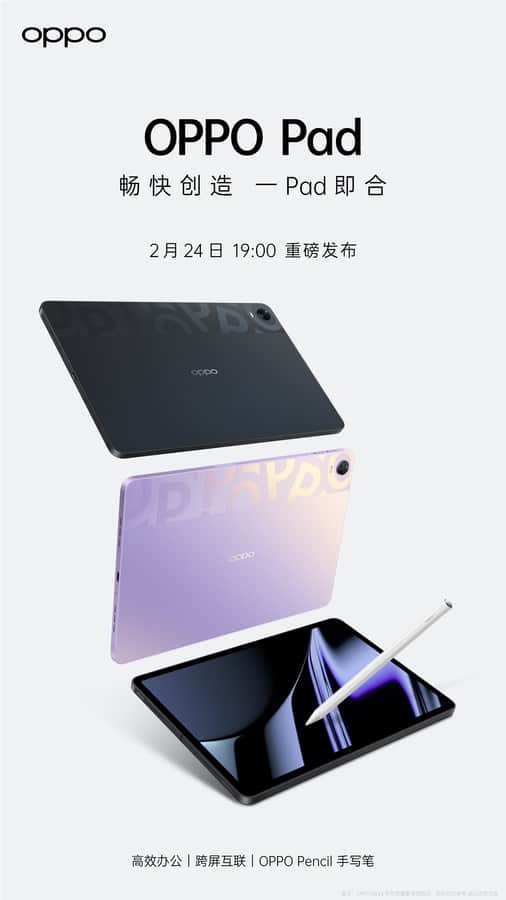