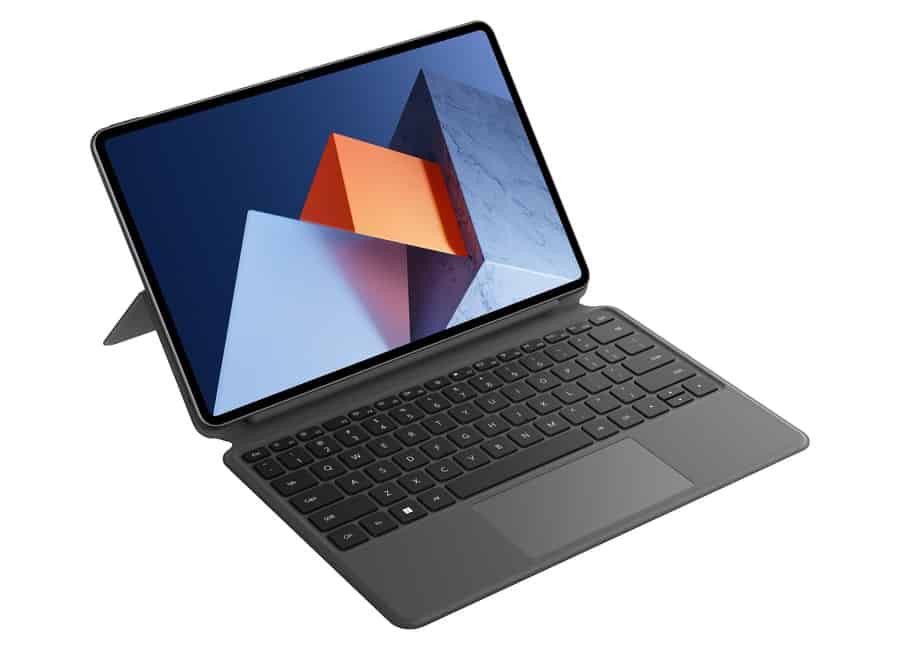 Huawei had a lot to say at MWC 2022, in terms of product announcements. The company introduced quite a few devices, including a 2-in-1 Windows 11 laptop, an E Ink tablet, an all-in-on PC workstation, and a rather powerful laptop. 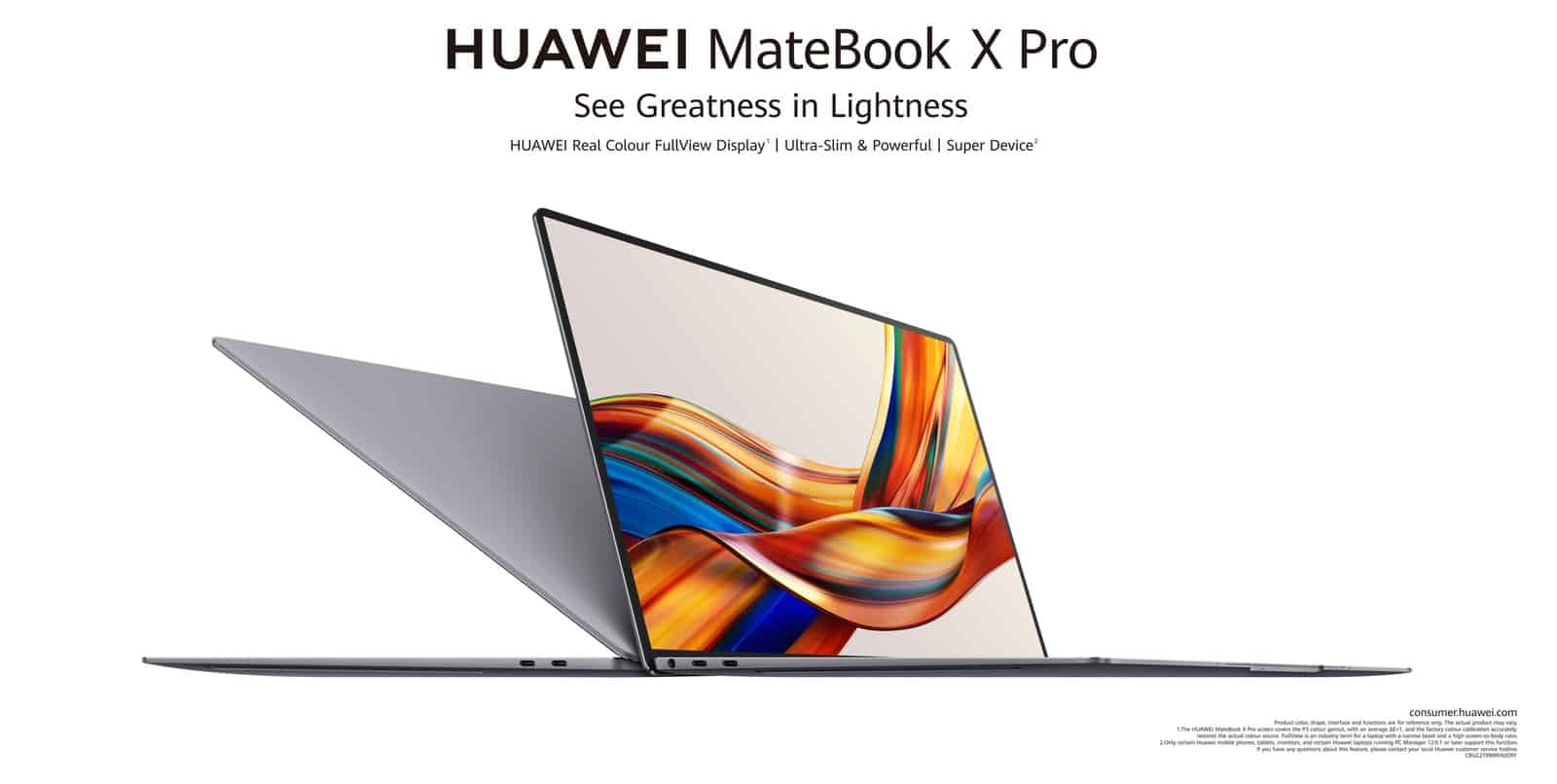 Let’s kick things off with the regular laptop, which can also be considered an ultrabook. The device’s name is the Huawei MateBook X Pro. This laptop is made out of metal, and it’s quite light at 1.38 grams. It’s also quite thin.

The device features really thin bezels, and a 14.2-inch Real Color FullView display. This display offers a resolution of 3.1K and a 90Hz refresh rate. It has a 92.5-percent ultra-high screen-to-body ratio. 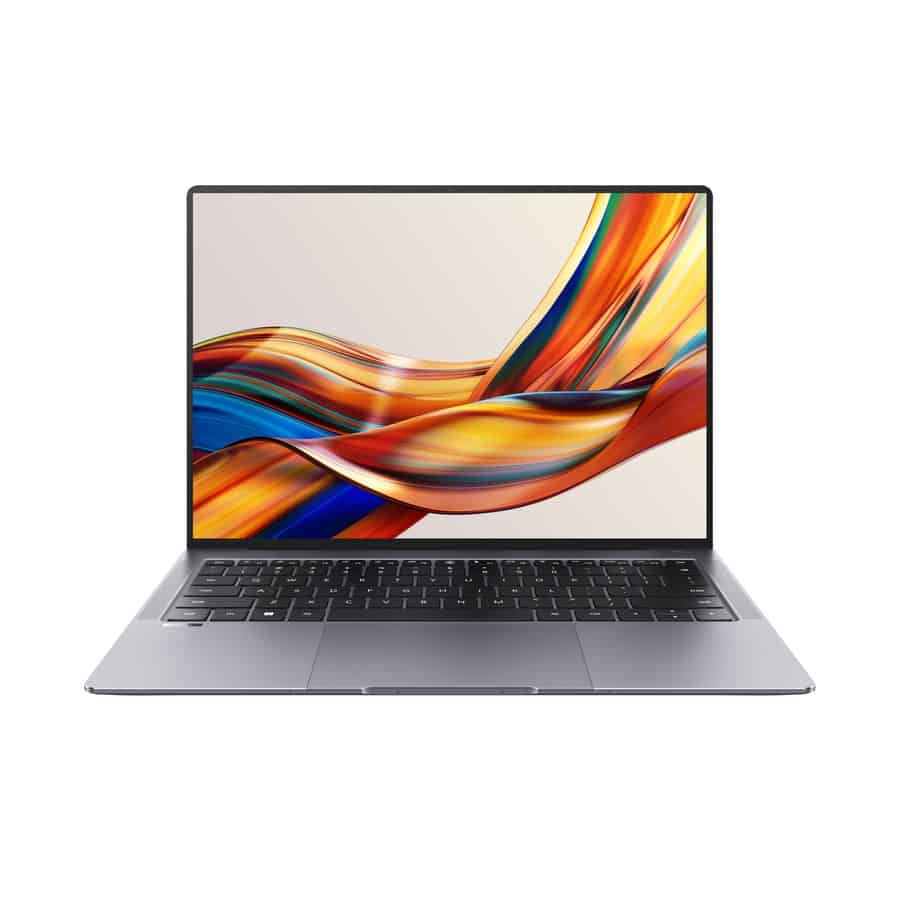 It is equipped with 16GB of LPDDR4X RAM, and can be configured with up to a full terabyte of NVMe PCIe SSD. It is fueled by the 11th-gen Intel Core i7 SoC.

Windows 11 comes pre-installed, while there are quite a few ports included. This laptop is priced at €1,899, and it comes in gray color. 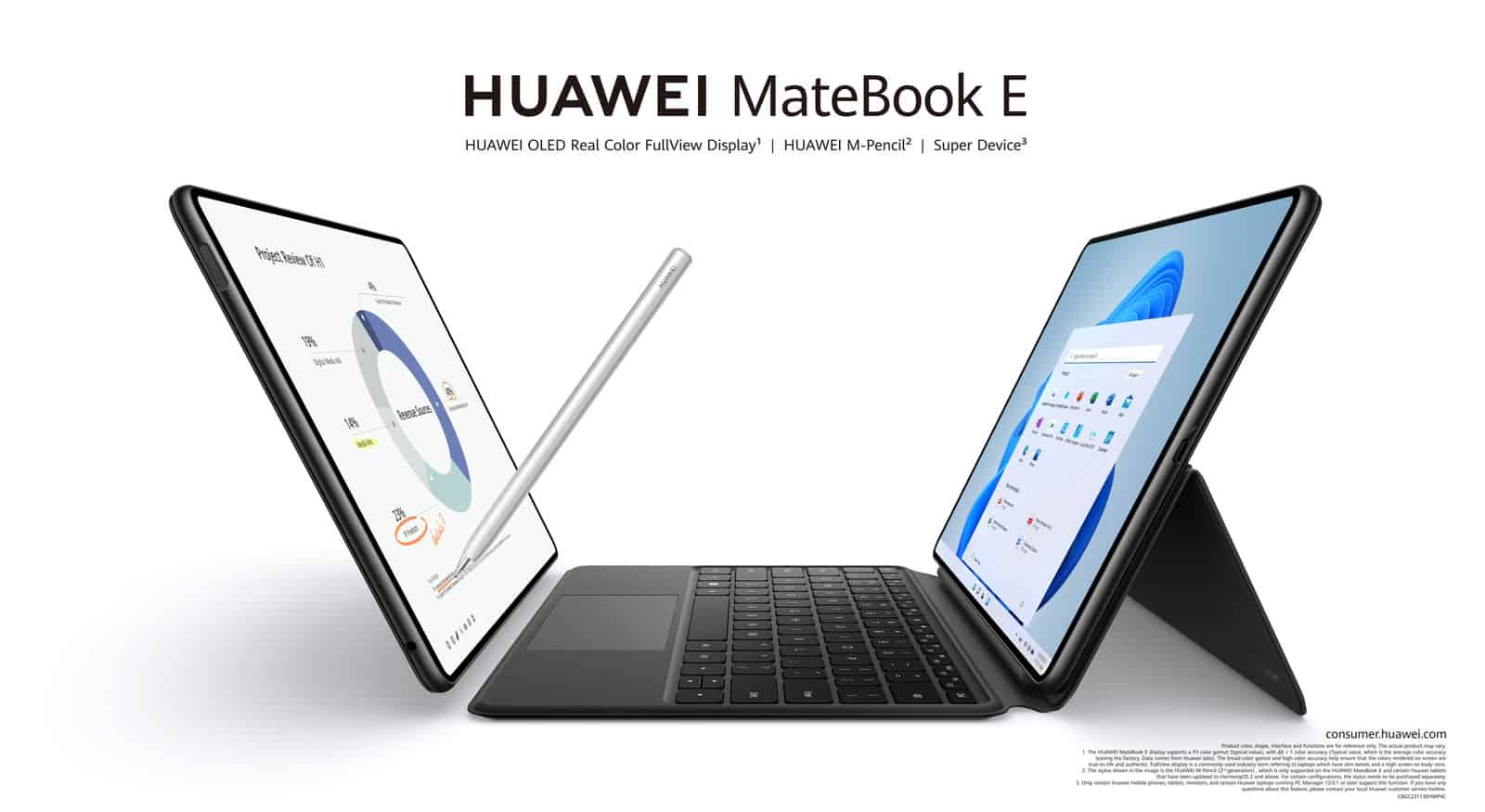 The Huawei MateBook E is a 2-in-1 device, a hybrid. It is a tablet equipped with Windows 11 OS. It does become a laptop quickly thanks to the detachable physical keyboard (aka Magnetic Keyboard), which comes with a kickstand, and a touchpad.

This device is really thin, and light, while it’s made out of metal. It features a 12.6-inch OLED display, with up to 600 nits of peak brightness. The device has a screen-to-body ratio of 90-percent. 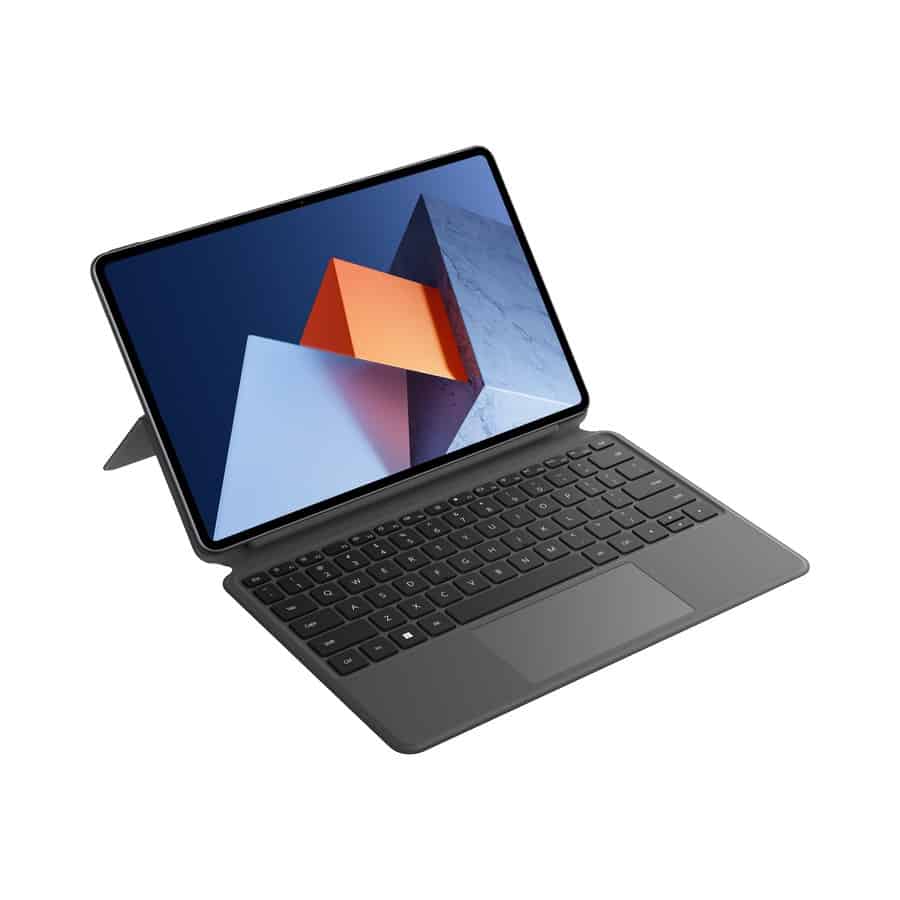 This display also supports the second-gen M-Pencil stylus, which offers a 2ms of response time, and 4,096 levels of pressure sensitivity. It is fueled by the Intel Core 11th gen SoC, we think it’s the Core i7, but that hasn’t been confirmed. You’ll also get 16GB of dual-channel RAM here, and up to 512GB of SSD storage.

The price for this hybrid device is €649.

The Huawei MatePad Paper is the company’s E Ink tablet. This device features a 10.3-inch E Ink FullView Display. It has a screen-to-body ratio of 85-percent, and it supports a second-gen Huawei M-Pencil stylus.

This device runs HarmonyOS 2, and it has a ton of features, it’s nowhere close to an e-reader or something of the sort. It can also act as external storage for PCs and laptops.

This device comes with the M -Pencil and a Folio cover included in the box. It is priced at €499. 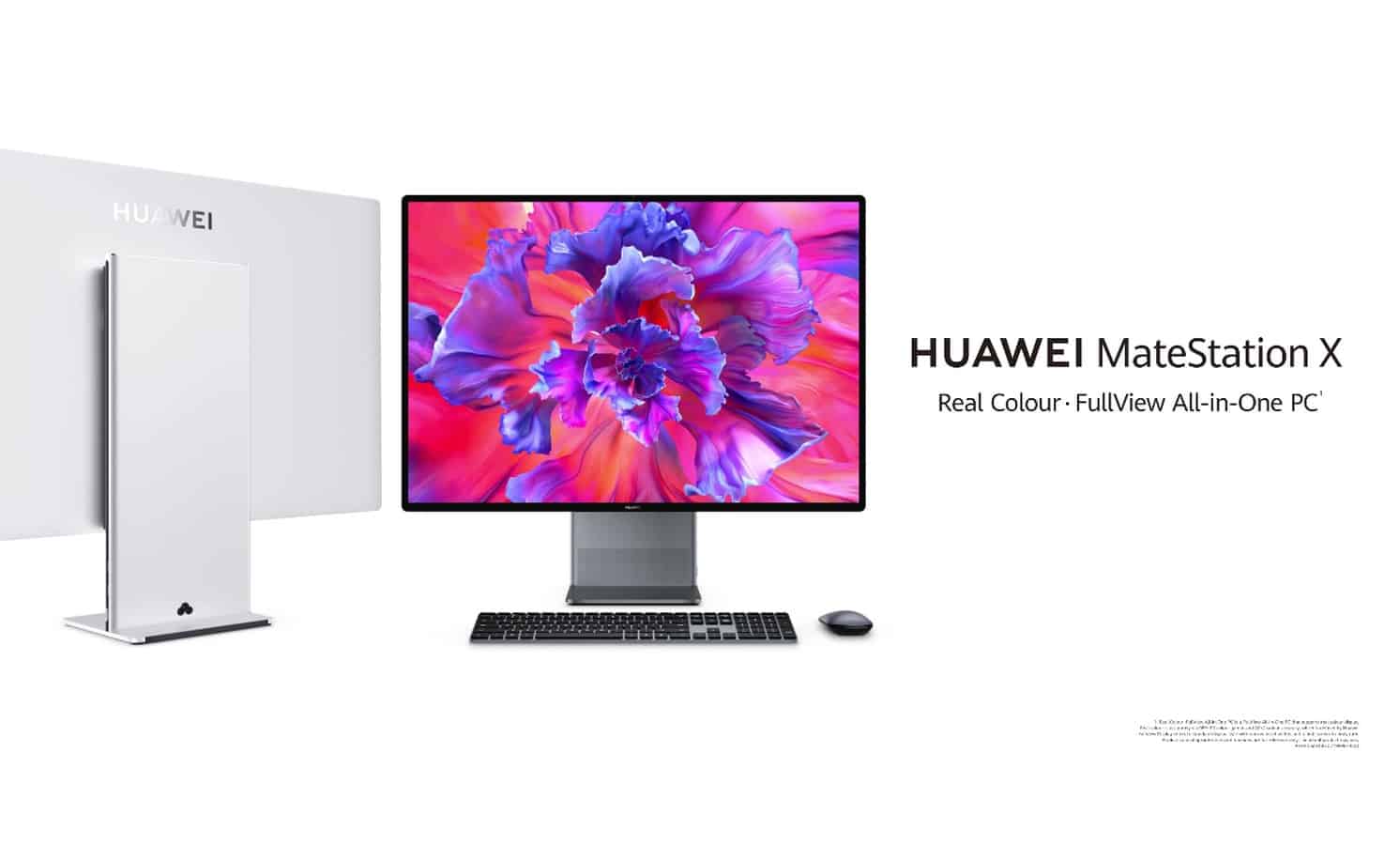 The Huawei MateStation X is the company’s new all-in-one PC. It comes with a CNC-machined and sandblasted aluminum-alloy body. We’re looking at a 28.2-inch 4K+ touch display here, with a screen-to-body ratio of over 90-percent.

The AMD Ryzen 5000 series chipset fuels this device, as it is configurable with up to an AMD Ryzen 7 5800H SoC. It is also equipped with 16GB of dual-channel DDR4 RAM, and half a terabyte of SSD storage.

The Huawei Shark fin fan tech for heat dissipation is also included, and there are two full-range speakers included here. A woofer is powered by Devialet’s Speaker Active Matching technology. 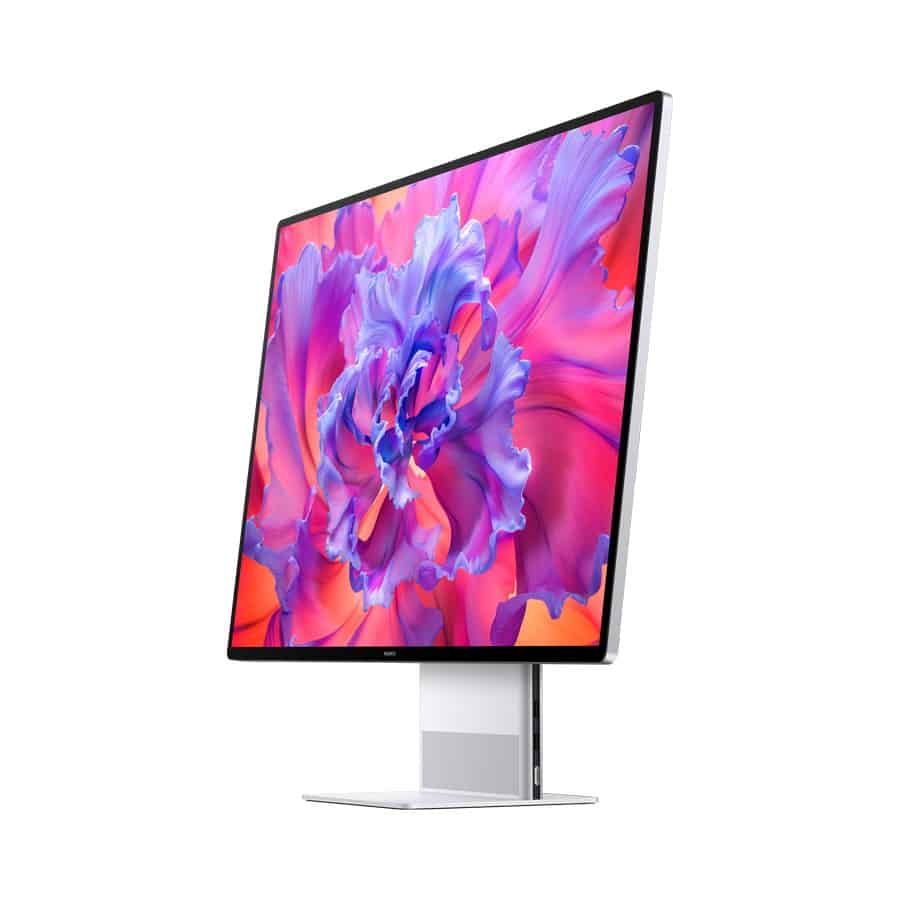 Wi-Fi 6 is also supported, and there is also a fingerprint scanner placed on this device. Windows 11 comes pre-installed on the device, while the MateStation X comes in Space Gray and Mystic Silver colors. This thing is priced at €2,199.