Last week, the big news was Verizon and AT&T rolling out their C-Band network for 5G. Which is going to provide faster speeds and also work indoors. Which is something that mmWave cannot do right now. T-Mobile was oddly quiet last week, but that’s because its C-Band spectrum won’t be ready until the end of the year. Since it didn’t buy as much as Verizon and AT&T did. That is due to the 2.5GHz spectrum it got from acquiring Sprint in 2020.

T-Mobile has been working on 5G carrier aggregation or 5G CA. This allows the carrier to use two channels of 5G at the same time. That allows for faster speed or better range. The capability has been available on T-Mobile’s network for some time but hasn’t really said where. Well, Sascha Segan of PCMag found some in New York City. Currently, it only works on the Galaxy S21 series (sans S21 FE) and the iPhone 13 series. More devices will be able to take advantage in the “coming months”.

As you can tell from this map that Segan published, 5G CA with T-Mobile is very limited, at least in Brooklyn right now. That’s because it is still new and T-Mobile is still working on it. 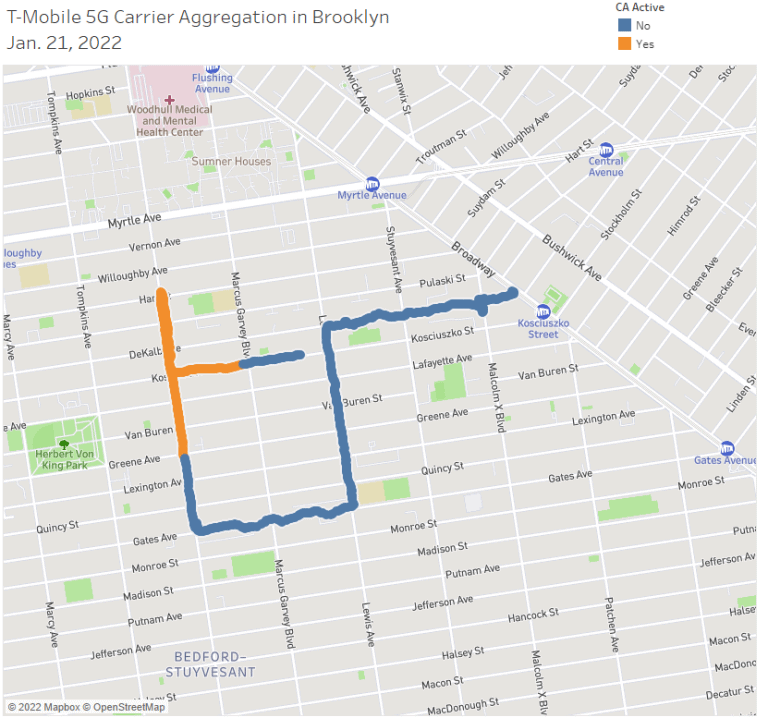 So what about the speeds? Well according to Segan, on 5G CA he say speeds of around 340Mbps down and 82Mbps up. That’s not much better than what he got with “Ultra-capacity” 5G. He also stated that his 5G CA speeds peaked at 425Mbps down, and that he had just gotten a speed of 642Mbps on ultra-capacity 5G just a few minutes before.

This means that T-Mobile will have more room for capacity, before the network starts to slow down. Which was a major issue with 4G LTE on some carriers. Having 200MHz of spectrum available, with two band 41 channels will let T-Mobile offer its home internet service to more people.

5G CA has mostly been used to improve range, and not speed. Meaning that with 5G CA T-Mobile will be able to stretch its coverage further, and work better indoors.