A lot is expected from Samsung’s upcoming Galaxy Tab S8 lineup. Unsurprisingly, the Galaxy Tab S8 Ultra has generated quite a bit of hype based on its rumored hardware specifications. As we count down to the official launch of the new tablet series, Samsung has jumped the gun and inadvertently revealed a snapshot of the high-end tablet on its website.

The image you see below appears within the Bixby support page (via 91Mobiles), showing the Galaxy Tab S8 Ultra and its front-camera notch prominently. Samsung is reportedly using the notch only for the Ultra variant of the tablet lineup. The notch is justified given that the Galaxy Tab S8 Ultra would feature dual front cameras, but more on that later.

The image also reveals a case or keyboard of some type, likely sold separately. Strangely, the aforementioned Bixby page showing the Galaxy Tab S8 Ultra is still up. If this is any indication, we could have further information coming our way sooner than expected. 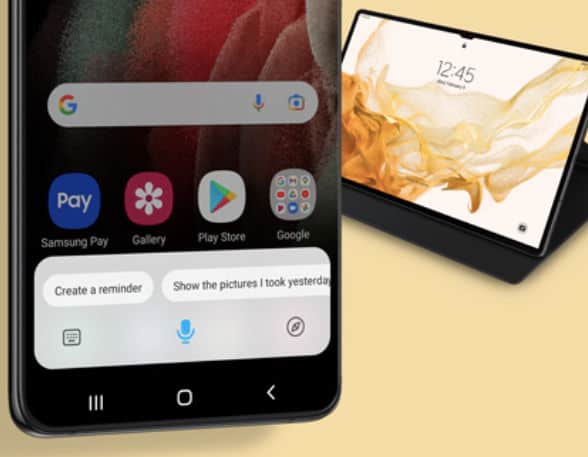 We’ve encountered a few unofficial renders of the Galaxy Tab S8 Ultra already. But this is the first time we’re getting a glimpse at the tablet straight from the source.

Samsung will position the Galaxy Tab S8 Ultra as an alternative to the Apple iPad Pro lineup. The device will sport a 14.6-inch (2960 x 1848) Super AMOLED screen with a 120Hz refresh rate. It would also offer up to 16GB of RAM and 512GB of internal storage.

It should feature the octa-core Snapdragon 8 Gen 1 chipset and support for the S Pen stylus. In the camera department, the Galaxy Tab S8 Ultra will bring a 13-megapixel primary shooter and a 6-megapixel ultrawide sensor on the back. The front panel will house two 12-megapixel sensors for superior photo and video recording capabilities.

Android 12 with One UI 4 would be running all three tablets of the lineup. Meanwhile, features like quad speakers w/Dolby Atmos and 5G connectivity should be present as well. Users can expect an 11,200mAh battery on the Ultra variant with support for 45W fast wired charging. While we don’t have precise details about the launch, the rumor mill suggests the Galaxy Tab S8 series is not too far away.