OnePlus’ CEO, Pete Lau, has just confirmed the OnePlus 10 Pro specifications. The device will be launching on January 11 in China, and we know exactly what to expect at this point in time.

The company released a number of images of the device yesterday, while Pete Lau just confirmed its specifications. He did that via social media, and even though he didn’t really go into ultimate detail, there’s a lot to talk about here.

First and foremost, let’s just say that rumors were mostly right. The Snapdragon 8 Gen 1 will fuel the device, though we already knew that, as it was confirmed recently. Pete Lau says that we can expect a 120Hz Fluid AMOLED (second-gen) LTPO display here.

That means that the display will offer an adaptive refresh rate. He did not confirm its size, but the rumors say it will be a 6.7-inch one, which is probably accurate. That display will be curved, though.

OnePlus will include LPDDR5 RAM into the package, and UFS 3.1 flash storage. There will be two speakers on offer, one bottom-firing, and the other likely front-firing.

Three Hasselblad cameras will be located on the back

Three cameras will sit on the back, while one will be included on the front. 48, 50, and 8-megapixel units will be available on the phone’s back. A 48-megapixel camera will likely be the main one, while the 50-megapixel unit will be an ultrawide camera with macro shooting capabilities. We’re still not sure about that 8-megapixel camera. Pete Lau didn’t really detail all those cameras, other than mentioning megapixel details, and the fact Hasselblad will be a part of the picture.

Regarding the cameras, Dual OIS will be supported. You’ll be able to find a 32-megapixel camera on the phone’s front side. Android 12 will come pre-installed, of course, with OxygenOS 12.

Pete Lau also mentioned that Bluetooth 5.2 will be included, along with NFC, VoLTE, WoWiFi, and an X-axis Linear Motor for haptics. The OnePlus 10 Pro will measure 163 x 73.9 x 8.55mm, while the weight is still unknown. 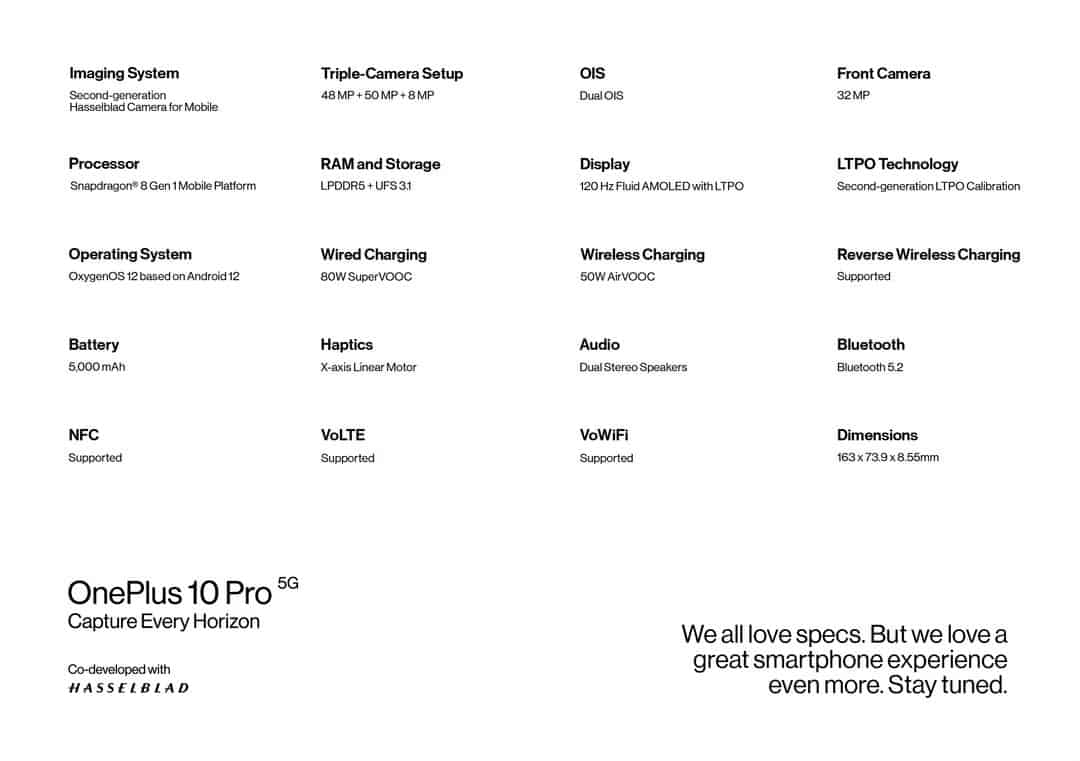