Marketed as the world’s first phone with the Snapdragon 8 Gen 1 chipset, the Motorola Edge X30 was officially unveiled in China last month. The phone has now appeared on the Thai device certification database NBTC. However, the device here is called the “Motorola Edge 30 Pro” and not Edge X30.

The model number of the Edge 30 Pro is listed as XT2201-1, while the Edge X30 goes by XT2201-2 (via MySmartPrice). So we know it’s the same device with a region-specific numerical marker (1 and 2). This indicates that Motorola could launch this as the Edge 30 Pro in all markets outside China.

Since the device arrived a month ago, its hardware specifications are already public. Barring a few color variants, we don’t think much else will be different on the Edge 30 Pro.

While the Edge X30 (or the Edge 30 Pro) is already available in China, there’s currently no information on its global release. But given other Motorola handsets are expected to break cover over the next few weeks, we should have a better idea in the coming days.

Customers will also find 128GB and 256GB of storage options, while all versions will include at least 8GB of RAM. There’s a 50-megapixel primary camera with OIS, plus a 50-megapixel ultrawide sensor and a 2-megapixel depth sensor on the rear panel. Shutterbugs will love the fact that the Edge 30 Pro offers a mammoth 60-megapixel camera on the front panel.

The device is only splash-resistant (IP52), so it cannot handle extreme weather conditions. The occasional droplets of rain should be fine, however. You will also find features like 5G, dual-SIM connectivity, and stereo speakers with Dolby Atmos. The Edge X30 runs Android 12 with the MYUI 3.0 skin in China. However, the global version should feature a relatively stock version of Android in line with existing Moto smartphones. 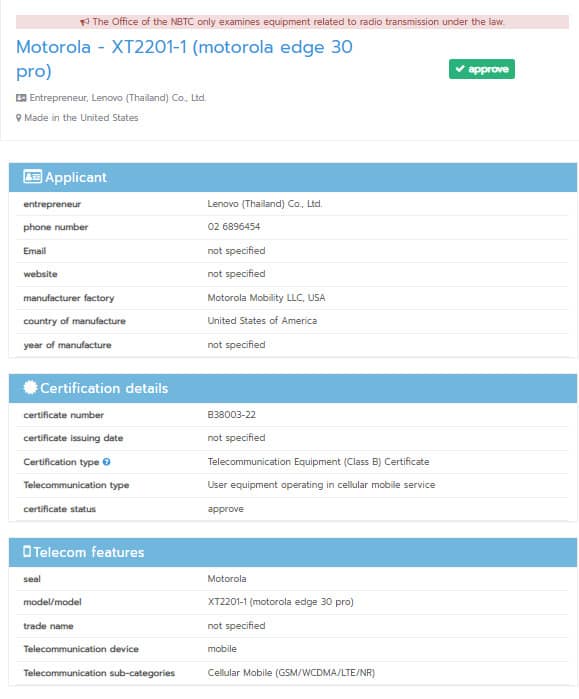