Google is removing Verizon and Boost as mobile phone billing options for Play Store purchases in the US. The company hasn’t made any public announcement regarding this but has updated an official support page to reflect the change. AT&T, Sprint, T-Mobile, and US Cellular are now the only four participating carriers through which you can pay for Play Store purchases.

According to a thread on Reddit (via Android Police), Google has sent emails to Verizon customers notifying them about this change. The email says Verizon carrier billing for Play Store purchases will no longer be available starting February 22, 2022. This will not majorly impact users who make one-off purchases on Play Store. They can select some other payment method for their future purchases.

However, for users who have selected Verizon carrier billing for recurring payments such as monthly subscriptions, this upcoming change will require them to act. They will need to update their subscriptions and change the billing method. Google has provided several useful links in its email, so if you’re one of those users, you might want to act fast.

It’s unclear if Boost subscribers have also received a similar email from Google. They presumably have. As for why the company is dropping support for carrier billing for Play Store purchases via these two carriers, it’s anybody’s guess. When asked about it, Google said it cannot disclose those details due to “security concerns.”

Google offers carrier billing options for Play Store purchases in several countries. If you sign up for it, any purchase you make on the Play Store is charged to your carrier bill. This way, you don’t require to share your credit or debit card information with multiple businesses. It also makes things easier. Unfortunately, Verizon and Boost customers will no longer be able to take advantage of this from next month.

Meanwhile, if you’re an AT&T, Sprint, T-Mobile, or US Cellular customer, you can still select carrier billing for Play Store purchase, at least for the time being. As the company notes, you will receive an SMS starting with “DCB” or “DCB_Association” when you sign up for it. Purchases made on Google Play Store will reflect on your carrier account after 15 minutes. 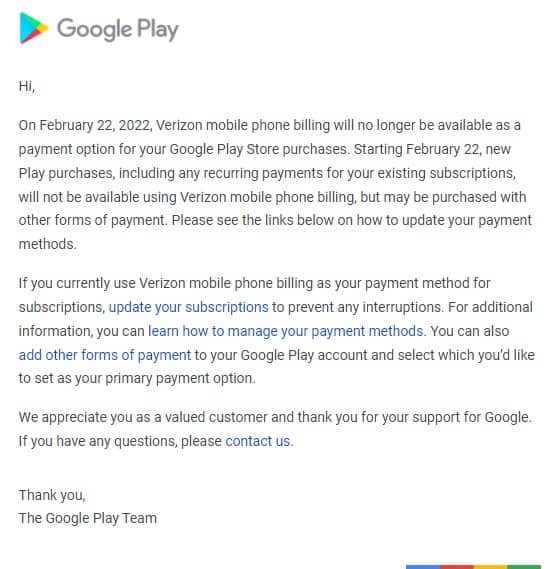