Before we get down to it, it’s worth noting that ‘Pipit’ was mentioned back in November by 9to5Google. It was reported to be the company’s upcoming foldable smartphone, and it appeared in the Google Camera APK.

That being said, the device managed to score 4,811 points in the single-core benchmark on Geekbench. It also scored 11,349 points in the multi-core test. 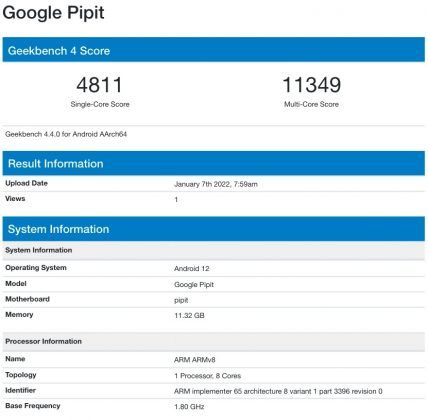 Geekbench reports that the device features 12GB of RAM and comes with Android 12 out of the box. The processor specs suggest that this device could be powered by the Google Tensor chip, which is to be expected if it comes in the near future.

We still don’t know when will it launch

So, when is this phone coming? Well, that’s the thing, nobody knows. It was rumored to arrive by the end of last year, but that hope didn’t last long. Both that foldable and Google’s Pixel Watch were expected to launch, but that didn’t happen.

Many would say that they both will launch this year, and that’s plausible, we just don’t know when. The Pixel Watch may launch in mid-2022, during Google I/O, or something of the sort. The same may happen with the Pixel Fold, but that’s just a wild guess.

In fact, Google may wait with the launch of its first foldable smartphone, and may even push it out at the same time as the Pixel 7 series at the end of the year. Who knows. One thing is for sure, this is not the last time we’re hearing about Google’s foldable in 2022.