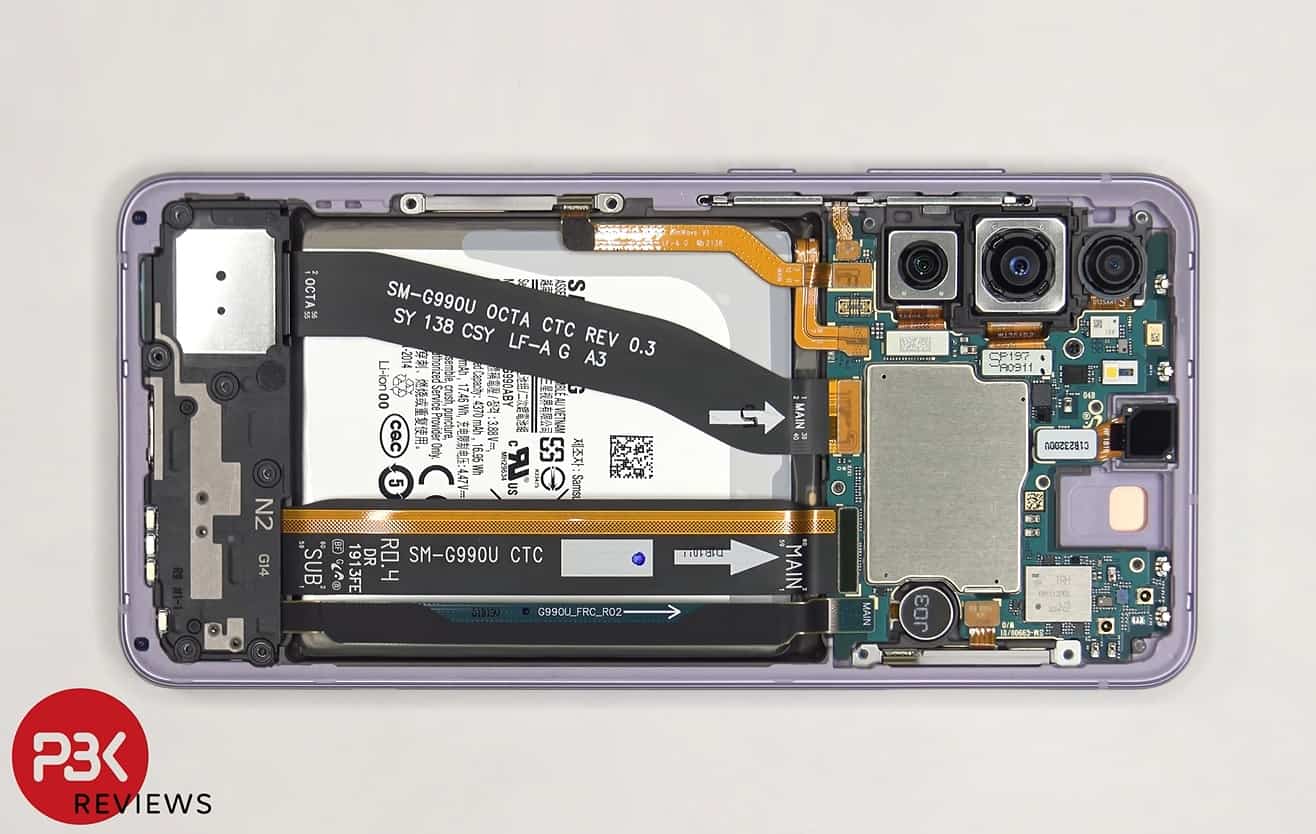 After months of leaks and rumors, the Samsung Galaxy S21 FE finally went official last week. While we knew pretty much everything about the phone beforehand, it’s always nice to have an official confirmation. Now that the device is starting to reach consumers, we can see it from the inside as well. YouTube channel PBKreviews has performed a teardown of the Galaxy S21 FE for everyone to see how Samsung has stacked all the internal components. This teardown video, which we have attached at the end of this article, also gives you an idea of the phone’s repairability and servers as a tutorial to DIY (do it yourself) enthusiasts.

Like any other teardown video, this video also begins by removing the SIM tray and peeling off the back panel. Samsung has fitted a plastic back on the Galaxy S21 FE, so a little heat and gentle prying with a pry tool will be enough to remove it without any damages. There aren’t any cables attached to the back panel.

On the other side, we have 17 Philips screws holding together all the components of the phone. Unscrewing these screws will let you peel off the graphite film and the wireless charging coil, as well as the top plastic cover. Don’t forget to be gentle with the whole process since the wireless charging coil is still connected. Once you have disconnected it, the whole thing will come off. We can see a layer of graphite on the back of the plastic cover. This helps in transferring heat from the motherboard to the back panel.

At this stage, we have a clean look at the internals of the Galaxy S21 FE, clean enough to make a teardown skin out of it (see featured image above). We can see two mmWave 5G antennas, one each on either side of the phone. Note that the phone comes without mmWave 5G support in some regions.

There’s a single Philips screw holding down the motherboard. Disconnecting the cables and unscrewing that screw will let you lift up the mainboard. The triple rear camera array is still attached to it but they can be popped off pretty easily. Samsung has covered the processor with a graphite pad and thermal paste to help with heat dissipation.

The speaker assembly at the bottom also comes off fairly easily. Removing it reveals the sub-board and connectors for the under-display fingerprint scanner and the display panel. The sub-board is held in place by three Philips screws.

There are no pull tapes to remove the battery

Samsung hasn’t included any magi pull tapes to help with removing the battery. So you will need some isopropyl alcohol to dissolve the adhesive before you can lift off the 4,500mAh unit. Underneath the battery is a copper vapor chamber that also runs under the motherboard.

Overall, the Galaxy S21 FE doesn’t appear to be a too difficult phone to repair. PBKreviews gives it a repairability score of 7.5 out of 10. Probably because the USB Type-C port appears to be soldered onto the sub-board and that the selfie camera is glued firmly at its place. You can watch the full Galaxy S21 FE teardown and re-assembly below.