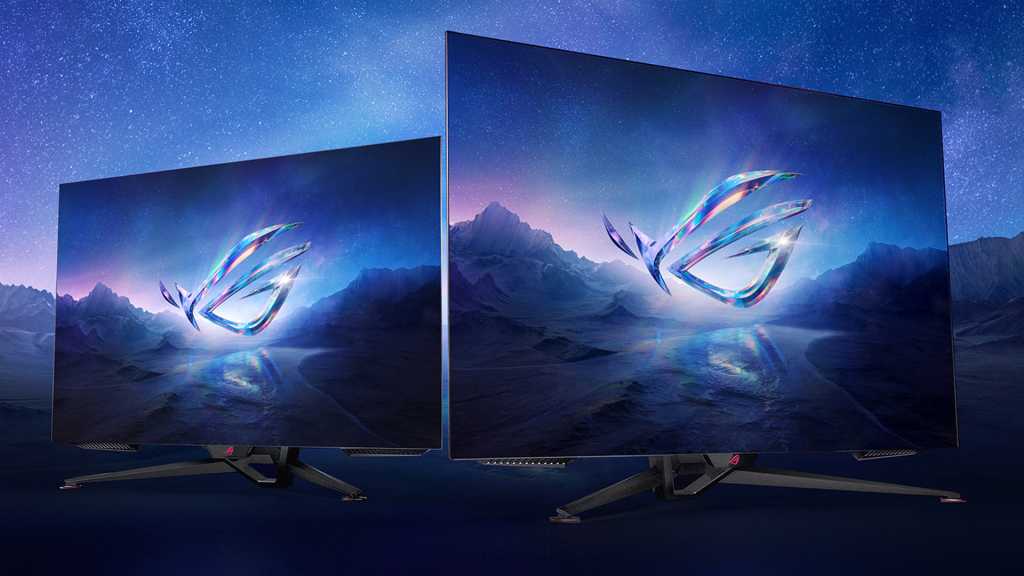 ASUS is ready for CES 2022 this year and has a full crop of gaming products it’s announcing as part of its ROG lineup, including the ROG Swift PG42UQ gaming monitor. According to ASUS, this is the world’s first OLED gaming monitor in a 42-inch size. Which is a pretty prestigious sounding title considering the amount of gaming monitors available these days, let alone the ones that also use OLED panels in their build.

Of course the ROG Swift PG42UQ isn’t the only monitor ASUS is unveiling. It also offers this same monitor in another, larger size. It also has a new monitor geared towards Esports – the ROG Swift 360Hz PG27AQN NVIDIA G-Sync monitor. Sure the model name is quite the mouthful, but you won’t care when you’re enjoying everything it has to offer.

That is, unless you have to list off the title 20 times a day. Then you might start to care.

The ASUS ROG Swift PG42UQ has a larger sibling

If 42-inches of gaming bliss isn’t enough for you, ASUS has another option of the monitor. A 48-inch size screen to truly make your games feel larger than life. As much as a 48-inch screen can at least.

Although the two differ in size, they both offer mostly the same specs. You’re looking at 4K visuals with 120Hz refresh rates on both, as well as a 0.1 ms response time and true 10-bit color. Plus, each monitor has both HDMI 2.1 and HDMI 2.0 ports. Which means you could use either of these with the PS5 and Xbox Series X and take advantage of that feature that the consoles offer. Worth mentioning is that there are two of each of those ports.

Additionally, there’s DisplayPort 1.4 support and a USB Hub. So, it’s safe to say there’s plenty of connections for you to make use of.

With regards to the Esports monitor, as the name suggests it has a 360Hz refresh rate. Making it perfect for pro players at competitions, or streamers who play at a high level. Alongside that, it’s a 27-inch panel with 1440p resolution, and an NVIDIA Reflex Analyzer for monitoring end-to-end system latency. Outside of the monitors, ASUS announced a handful of ROG gaming accessories.

The new ROG router will make your internet blazing fast

ASUS is known for its super fast and capable gaming routers, and this year it has a new one to take the helm. The ROG Rapture offers WiFi 6E support, four 2.4GHz bands, two 5GHz bands, and one single 6GHz band with 160MHz channels in the latter two.

ASUS says the router delivers 38% overall better coverage than previous models, and a maximum network throughput improvement of 18%. In addition to the router, ASUS also has a new gaming mouse with a 36,000 dpi and an 8,000 Hz polling rate, and two new gaming keyboards with dot matrix LED panels that sit in the top right corner for added customization.

Like the monitors, ASUS hasn’t listed pricing for any of its accessories.