It’s no secret that Samsung has high ambitions for the foldable market. The company introduced the Galaxy Z Flip 3 and the Z Fold 3 a few months ago, and we’ve already heard rumors about their 2022 successors.

According to the popular display supply chain source, DSCC (via SamMobile), the demand for Samsung’s clamshell foldables could surge in the first quarter of 2022. However, the source adds that demand could dip by the second quarter of the year.

Notably, December 2021 was a flourishing month for the South Korean manufacturer. It seems like the trend may continue until at least March 2022. The company produced 1.4 million foldables last month, which is a 3,435% Year-Over-Year (YoY) increase. The Galaxy Z Flip 3 was reportedly the most successful foldable, with Samsung producing roughly 1 million units in December 2021 alone.

We learn that regions like Europe, South Korea, and the U.S. were the largest markets for foldable phones last year. The demand appears to be somewhat higher in Europe, though. Around 56% of Samsung’s foldable production capacity could be targeted towards the region in Q1 2022, per DSCC.

More broadly, the manufacturer’s Q1 foldable phone output could witness a 568% YoY boost, going well beyond 1.5 million units. On the other hand, market experts forecast the demand to fall by up to 60% in Q2 2022. However, the numbers from Q1 are expected to be big for Samsung, driven mainly by the Galaxy Z Flip 3.

DSCC claims that the Galaxy Z Flip 3 could make up for 70% of the company’s foldable output in Q1. The good news is that prices for foldables could be down by the time Samsung readies the Galaxy Z Flip 4 and the Z Fold 4 in the third quarter of the year. This is because the company is going to secure 3 million additional foldable panels in 2022.

It’s unclear why the Galaxy Z Flip 3 is preferred over the Z Fold 3, but one key factor could be the pricing. There’s a gulf between the prices of the two foldables, which partially explains why a majority of the customers prefer the cheaper option. Another contributing factor could be the overall size and ease of use. 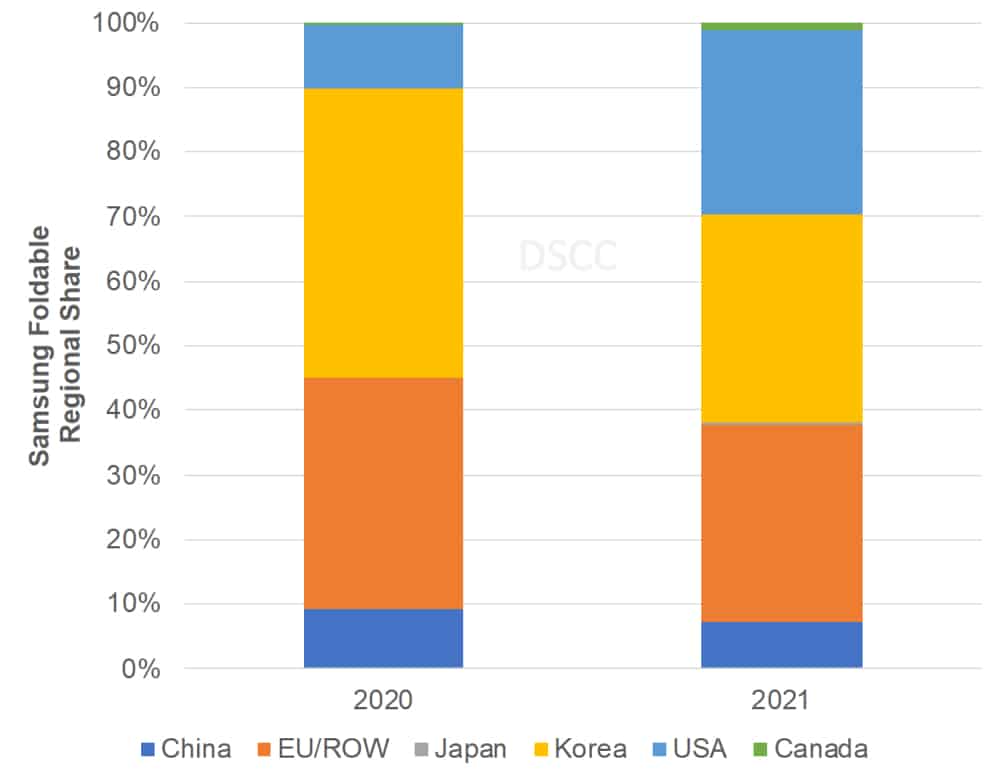