The Xiaomi 12 series launch date has been confirmed, and the company is planning to launch three phones. The devices will become official on December 28, but they will launch in China first. The global launch will follow early next year.

The variants you can expect are the Xiaomi 12, Xiaomi 12 Pro, and Xiaomi 12X. The latter one will be a mid-range smartphone, but a powerful mid-ranger. The ‘Pro’ will be the company’s flagship, but the vanilla Xiaomi 12 will also be quite powerful, and considered high-end.

Now, the company even shared an image of both the Xiaomi 12 and 12 Pro. You can check out that picture below this paragraph. As you can see, the Xiaomi 12 will be considerably smaller, as reported recently when CAD-based renders surfaced. 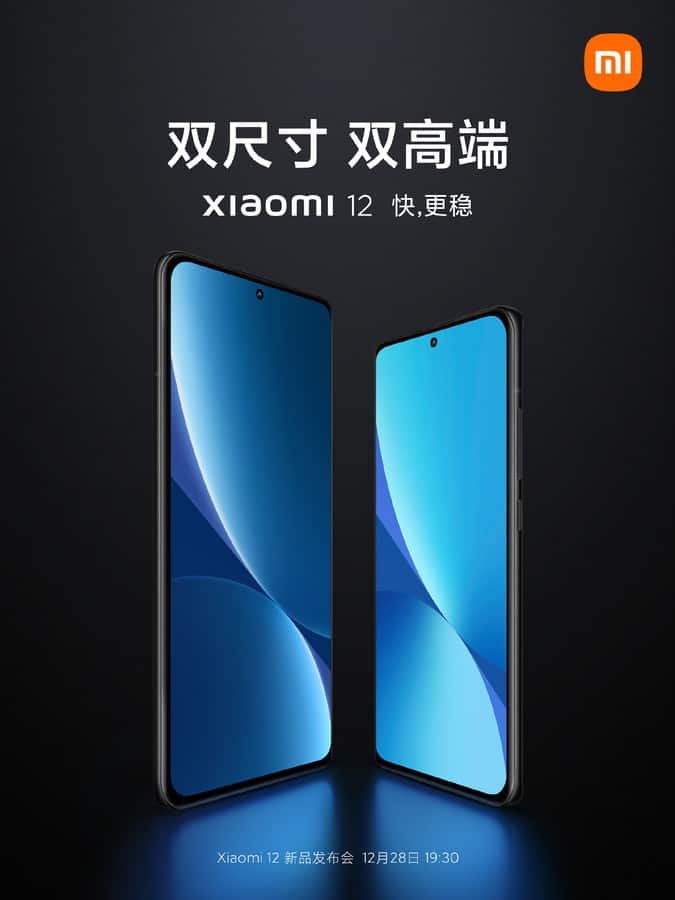 The Xiaomi 12 Pro will basically replace the company’s ‘Ultra’ lineup, it will be huge. We’re expecting to see a 6.7-6.8-inch display on the ‘Pro’ model. The Xiaomi 12, on the other hand, will feature a 6.2-inch panel, and be ideal for those of you who want a smaller flagship.

Both smartphones will feature a display camera hole, which will be centered. Both phones will also include curved displays, and we’re expecting those panels to offer a 120Hz refresh rate. The one on the ‘Pro’ model will offer higher resolution, though, and likely be an LTPO display.

The bezels are quite minimal on both smartphones, though they don’t seem to be uniform. We’ll have to wait and see, though, renders can be a bit deceiving.

The Xiaomi 12X, in case you were wondering, will offer a similar design, but with a flat display. We’re still not sure how large its display will be, but the phone is expected to feature a truly powerful mid-range processor. The Snapdragon 870 is rumored. The Xiaomi 12 and 12 Pro, on the other hand, will include the Snapdragon 8 Gen 1.

MIUI 13 will also launch on December 28

Three 50-megapixel cameras are tipped to be used on the back of the Xiaomi 12 Pro, while the vanilla model will likely offer a similar setup. Now, a separate set of rumors said that a 108-megapixel camera will sit on the back of the ‘Pro’ variant, so… we’ll have to wait and see, nothing is certain when it comes to specs. Do note that MIUI 13 is coming alongside these three devices.