A lot of people downloaded TikTok on Christmas Day, it seems. AppAnnie reports that TikTok was the most downloaded app on that day, on a global scale (that goes for both iOS and Android). That is hardly surprising, as TikTok has been stealing the show for a long time now.

TikTok managed to steal the show for Christmas Day, as it was the most downloaded app

That app managed to become a global phenomenon, and the pandemic only gave it a boost. People were forced to stay at home, and were looking for some sort of entertainment. TikTok did provide it, that’s for sure.

Now, AppAnnie revealed what other apps were immensely popular on Christmas Day 2021. Instagram followed TikTok, while Facebook and WhatsApp Messenger were placed third and fourth, respectively. 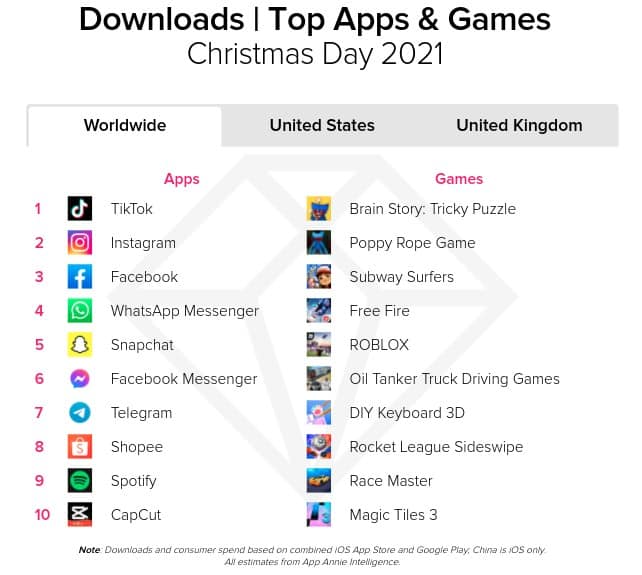 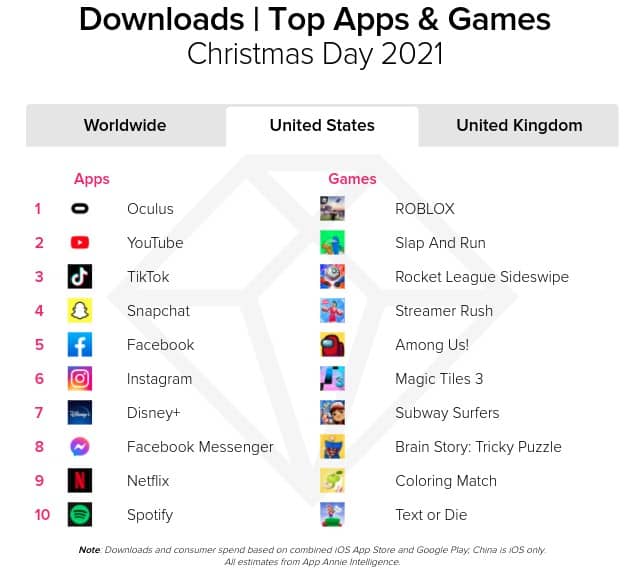 When it comes to games, there are some well-known titles on this list, and some less known ones. The Brain Story: Tricky Puzzle was the most popular on Christmas Day, globally. It was followed by Poppy Rope Game, Subway Surfers, Free Fire, and ROBLOX, which rounds up the top 5 list.

The Oil Tanker Truck Driving Games were fifth-placed, while DIY Keyboard 3D, Rocket League Sideswipe, Race Master, and Magic Tiles 3 were in the top 10 as well.

ROBLOX was the most popular game in the US, followed by Slap And Run, Rocket League SIdeswipe, Streamer Rush, Among Us!, Magic Tiles 3, Subway Surfers, Brain Story: Tricky Puzzle, Coloring Match, and Text or Die.

What’s interesting is that TikTok is also first-placed when it comes to the global Consumer Spend chart for Christmas Day 2021. It is, however, fifth-placed in the US, while HBO Max stole the show. ROBLOX was the game consumers spent the most both globally, and in the US.