When it comes to making flexible screen phones, Samsung seems to be the most ambitious. According to Let’s Go Digital, we know that the Korean OEM is seriously looking to bring its Triple-fold smartphone to fruition. We have another image that shows us this weird (yet absolutely awesome) looking device.

Some companies are still trying to master making phones that fold once, yet, here comes Samsung looking to make a phone that folds twice. The Samsung Triple-fold smartphone will do just like today’s tablet-style foldables and start off with the rough profile of a phone. Then, it will fold out to expand its size.

Only, instead of folding out once, it will fold out twice using two creases. This will expand the phone to the size of a much wider tablet. Right now, the Galaxy Z Fold phones expand to a squarish tablet form factor. With the triple folding action, it could be closer to a 16:9 aspect ratio.

So, how will the screens work?

This Samsung triple-fold smartphone will put the “Z” in Z fold, as the double crease will cause it to form a Z shape when it’s folded. When it’s shut, you can bet that it will be pretty thick seeing as the regular Z Fold is already thick.

Instead of having a separate front display to use when the device is closed, the front panel will just be one-third of the inner display. That will be the only part of the display that sticks out. Regardless, according to the source, there will be a separate display on the back to help use the back camera for a selfie camera.

What other specs do we know so far?

Based on the patent images, we can get just a bit of information. For starters, it looks like there will be a triple camera setup. The patent images, obviously, didn’t provide camera specs, but we can expect the typical sensors (main, ultrawide, and telephoto).

Two separate will batteries power the phone, and they’ll sit in the two outer sections of the phone. The middle section looks like it will be pretty empty. Other than that, the other piece of important information is the under-display fingerprint scanner on the front.

When can we expect this phone?

Since, at this point, we’re talking about patent images, you shouldn’t exactly hold your breath. Samsung patents a lot of interesting devices like its double sliding phone; however, most of them never come to the market.

On the other hand, this is the second time that this has popped up, and the source says that the patent was actually awarded to Samsung, so we’re not just dealing with an application. Only time will tell if we’ll see this phone in real life. 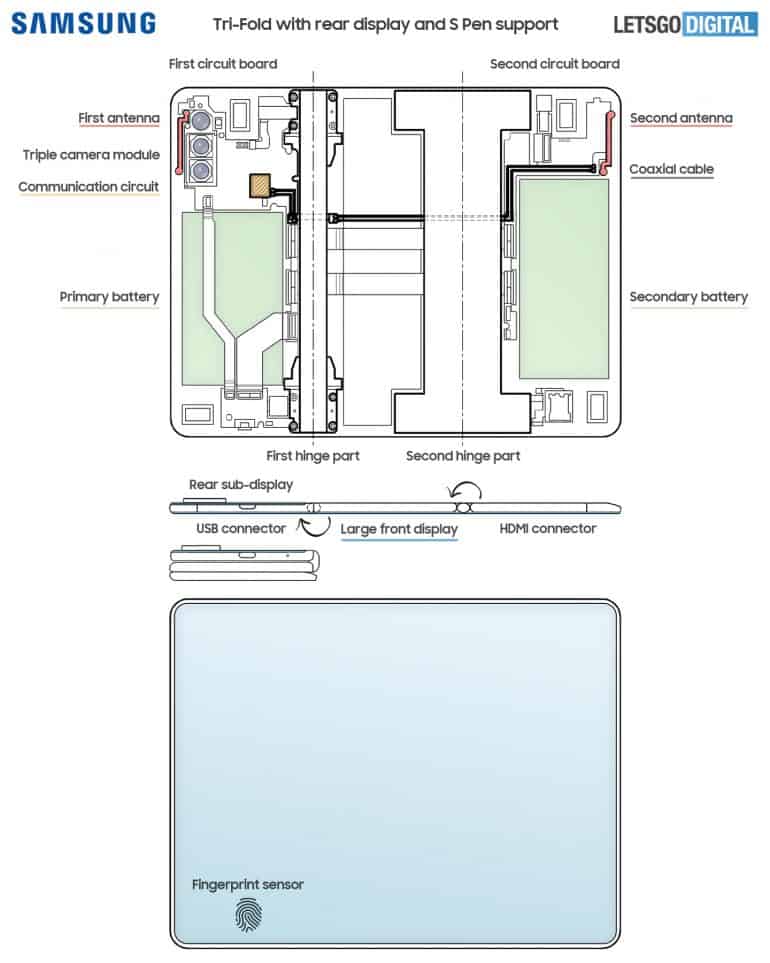