Flexible screen technology is the new thing, and Samsung is leading the pack. Now that foldable phones are becoming a mainstay in the modern tech landscape, it seems that the company is looking to expand on this. According to Let’s Go Digital, Samsung patented a smartwatch with a rollable display.

The Samsung rollable smartwatch will expand its size.

One issue with smartwatches is that the screens can often be too small. It does limit how much information can be displayed on the screen. In order to alleviate this, Samsung patented a smartwatch with a rollable display.

This smartwatch will have the regular circular design, but if you want the screen to be bigger, you can be extended it vertically. Your watch face will gain a considerable amount of real estate (about 40% more).

The Samsung rollable smartwatch will be made of two half-circle frames that will separate when it expands. When the screen is expanded, it will undoubtedly give you access to more functions.

There will also be a camera on this watch.

Looking at the patent images, we see another interesting feature with the Samsung rollable smartwatch. When the watch is expanded, and the two frames are separated, they will reveal a camera right in the middle of the watch.

This will mean that the camera will be an under-display camera. According to the report, this camera will be able to take both photos and videos. We can’t expect any top-tier performance from this camera because it’s not only very small but under display-camera technology is still developing.

Since this is only a patent, we can’t say for sure if we will ever see this device. Samsung filed for this patent back in July of this year, and we haven’t gotten any leaks or rumors that point to an official device. 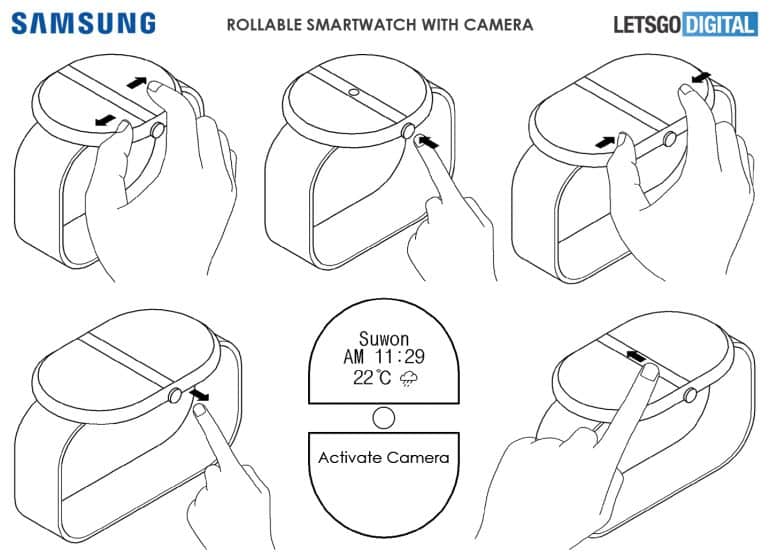 In other Samsung news: the Galaxy S22phones had some of their specs leaks.

The Galaxy S22 series of phones will be unveiled soon, and we’re all wondering what these phones will pack. A recent leak gave us some insight into some of the internals in these phones.