Motorola is silently working on a new foldable Razr phone. The confirmation comes from Chen Jin, general manager of the Lenovo Mobile Business Group, which owns the Motorola smartphone brand. Jin broke the news on the Chinese microblogging platform Weibo (via Android Authority). He also revealed a few vague details about the third-gen Motorola Razr foldable, which don’t have a name yet.

According to Jin, the Motorola Razr 3 (or whatever else the company calls it) will feature a more advanced processor. It will also sport a new design and come with an improved user interface. Unfortunately, that’s all we know about the upcoming Motorola foldable. Jin says the phone will first launch in China but doesn’t provide any timeframe whatsoever. Hopefully, we will hear more about it in the coming weeks and months.

Motorola created a lot of buzz with its first foldable phone. After all, it was reborn of the iconic flip phone Motorola Razr. The device arrived as the world’s first vertical (clamshell) folding phone in late 2019. The Lenovo-owned company followed up with a much-improved 5G version last year but it couldn’t stand in front of Samsung’s Galaxy Z Flip series phones. And the problem lied in the devices themselves.

The original Razr, as well as the second-gen Razr 5G, lacked big time in almost most key areas. Among other things, they featured mid-range processors, poor cameras, and smaller batteries. All in all, the phones didn’t offer a flagship-grade foldable experience though they cost a lot more ($1,400) than a conventional flagship smartphone.

Samsung, meanwhile, has continued to improve from the previous-gen models. The latest, Galaxy Z Flip 3 has a lot going for it, not least the Snapdragon 888 flagship processor, water resistance, wireless charging, bigger inner and outer display, powerful cameras, bigger battery, and more. All this, for just $1,000, which is far lower than the Razr 5G.

So Motorola has its task cut out to make a device that can compete with the Galaxy Z Flip 3. Of course, as the foldable market evolves, there will be scope for lower-cost devices as well. But as of now, foldables are seen as premium products for a niche market. So the Razr 3 has to be a flagship-grade product. Hopefully, Motorola wouldn’t disappoint.

Earlier reports suggest that the Motorola Razr 3 may not arrive until the second half of 2022. We will keep you updated as and when more information emerges. 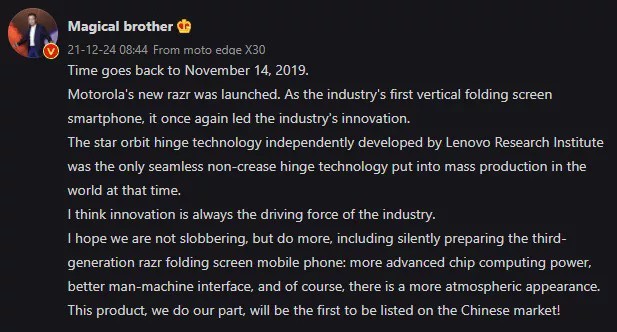