In somewhat surprising news, TikTok.com took over as the most visited website, over Google.com.

This all comes from Cloudflare, which ranks traffic for sites worldwide each year. Typically, the top five websites are Google, Facebook, Microsoft, Apple and Netflix. Sometimes Netflix and Amazon flip-flop, but other than that, the order is generally the same. This year, however, TikTok took over. After being number seven last year. 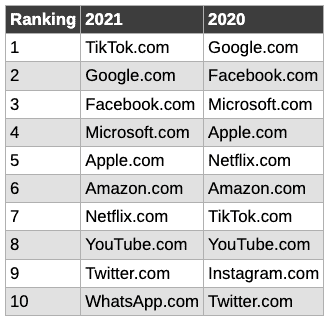 According to Cloudflare, TikTok took the top spot on February 17, 2021. Then in March is it had a few more days at number one. But after August 10, 2021, TikTok was number one on most days. So it’s not just a one-off for TikTok, this seems to be a pretty popular app all year round.

Despite how popular YouTube actually is, it only topped the charts on one day – February 2. That is the day that quite a few Super Bowl commercials debuted. That was also the day after a coup in Myanmar, that was recorded in an exercise video broadcast on local TV and then widely shared across YouTube.

Cloudflare says that Facebook is a “solid number three” all year, except for during its October outage where it slumped into fourth place.

TikTok taking over as the top spot for 2021 is pretty significant. Just think about how often people go to Google.com. Whether that is to search, for their email, or to use any of their other products – all of which are based off of the main Google.com domain. That’s a lot of traffic. And somehow TikTok became so popular that it overtook Google.com this year. That’s just how popular it has become. Now, the real test will be, if TikTok can keep that spot in 2022 and beyond.

Google.com is normally number one in all of these types of rankings, and has been for over a decade.