While Google pushed an update to the Pixel 6 and Pixel 6 Pro earlier this month, not all of the bugs were fixed. One of these is the network connectivity issue that persists even to this day. In response, Google is now getting in touch with some Pixel 6 owners regarding a possible fix for this bug through “Carrier settings” on the device.

The Google Support Team got in touch with some users who sent bug reports to the company. The email sent by the support team reads:

“Thank you for providing a bug report and additional information. Our engineers have identified a potential solution and they would like to push a change to your phone to see if it improves the issue. In order to do this we need your IMEI. This information can be found by going to your Phone settings › About Phone > IMEI.”

Google is also seeking information on the general location where the network problems arise (ex: indoor, outdoor, and so on). However, the company clarifies that it doesn’t require the users’ precise locations for this purpose.

After sending the IMEI to Google, the company will roll out an update in the background to the Pixel 6’s Carrier settings. 9to5Google points out (via PhoneArena) that this would be different from a conventional OTA update, suggesting the update will likely go unnoticed.

Some users on Reddit say the issue hasn’t completely gone away even after the update. This perhaps explains why the test is still going on in a limited capacity. Google hasn’t acknowledged the new test publicly. But email screenshots suggest the company is hard at work to resolve this issue.

We learned a couple of weeks ago how the connectivity bug on the Pixel 6 got worse after the December 2021 security patch. Users were facing reception issues in areas where there were no issues previously. A low signal also means that the battery drains a lot faster, making this a pretty annoying bug.

Unfortunately, this isn’t the first bug to impact the Pixel 6. Users reported a couple of issues with the screen during the initial release of the smartphone. Thankfully, a bulk of these issues were fixed with the December update. 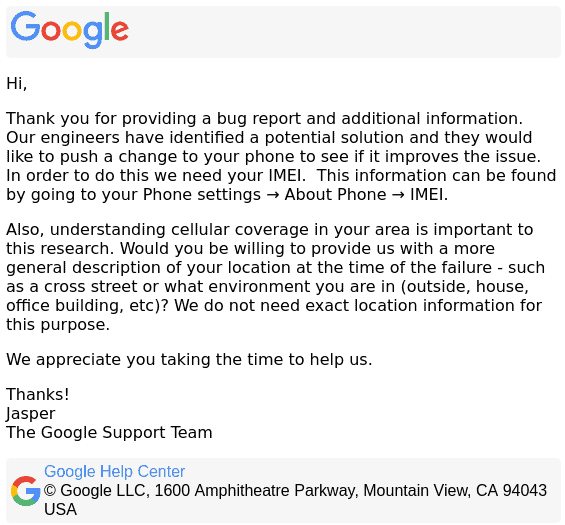