Twitter is expanding its subscription service Twitter Blue to more countries. Launched in Australia and Canada in June this year, the service is now available to users in the US and New Zealand as well. It will cost US $2.99 and NZ $4.49 per month in the two countries respectively. Twitter Blue is also gaining support for more platforms. Initially limited to iOS, the subscription service is now available on Android as well as on the web in some markets.

Additionally, Twitter is introducing new features to Twitter Blue. For the uninitiated, Twitter Blue is a paid version of Twitter for “power users”. It offers “enhanced and complementary features” on top of the existing free Twitter experience. Most notably, it brings the ability to undo tweets. Twitter Blue subscribers can recall tweets before they are posted. They get a customizable timer of up to 30 seconds during which they can correct any typo, factual errors, or make any other changes to their tweets. To start with, Twitter Blue users are getting ad-free access to news articles from certain websites in the US. This feature is a result of the company’s acquisition of Scroll earlier this year. Scroll offered the same functionality, i.e. remove ads from participating news sites for a monthly subscription fee. Twitter acquired the service in May and last month announced that it will integrate Scroll to Twitter Blue. Here we are.

Twitter is naming The Washington Post, L.A. Times, USA TODAY, The Atlantic, Reuters, The Daily Beast, Rolling Stone, BuzzFeed, Insider, and The Hollywood Reporter among participating websites. But there are more than 300 of them, and more will join in the future. If someone shares the link to an article from these websites on Twitter, it will feature an “Ad-free with Twitter Blue” label under the headline. Clicking on this link will give you ad-free access to that article.

Note that you cannot pass paywalls with a Twitter Blue subscription. So if an article requires you to pay for it, you will not have access to it unless you are subscribed to that website. Also, ad-free articles are currently available on iOS and desktop only. Support for the Android app should follow in the coming months. 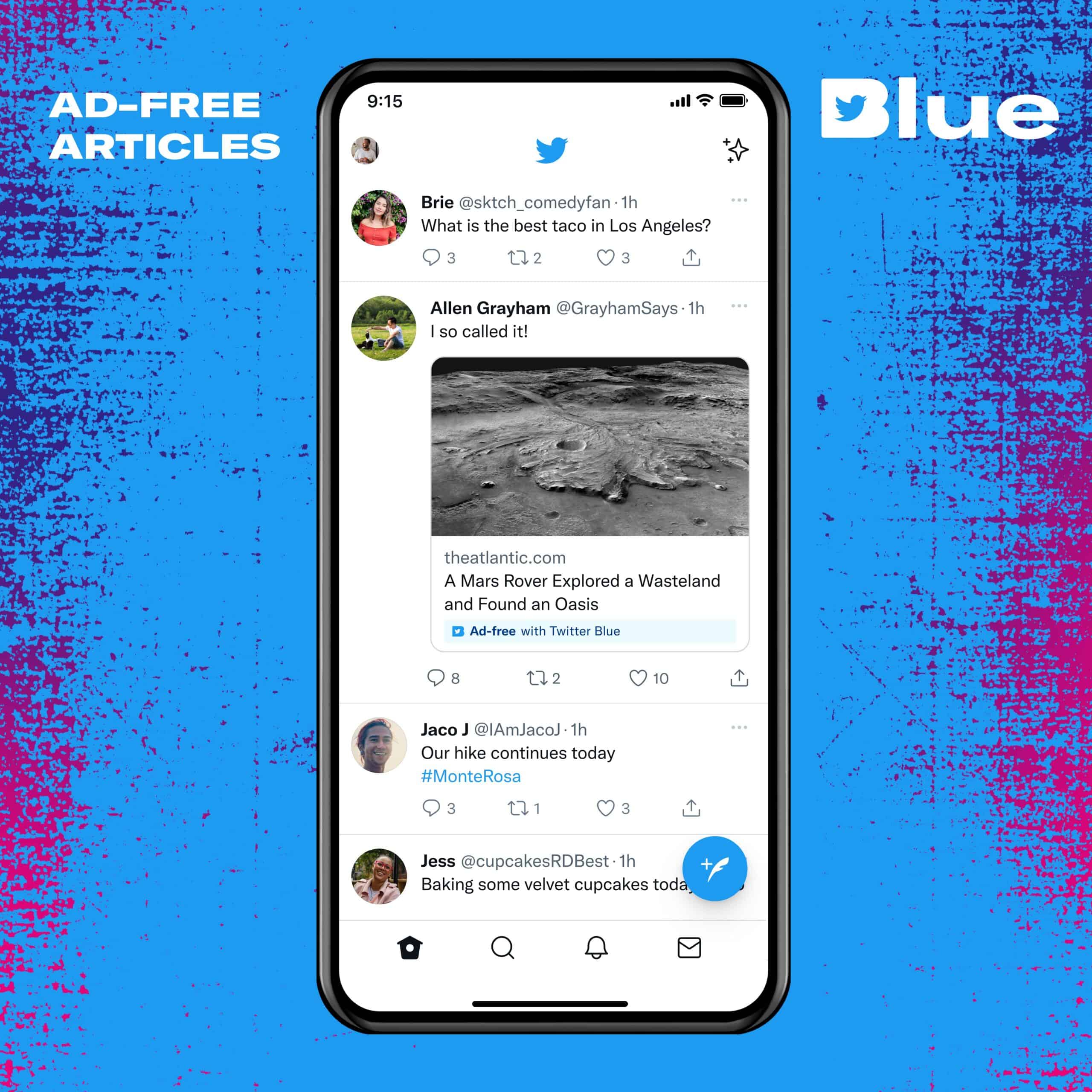 Other new features coming to Twitter Blue users include Nuzzel-inspired Top Articles. It is a roundup of the most-shared articles in your network over the last 24 hours. When Twitter acquired Scroll, it said it will wind down Nuzzel but bring its “core elements” directly to Twitter. It appears the company meant Twitter Blue. The roundup will be only available on Twitter though, and not as an email. This feature is available on Android and desktop.

Last but not least, Twitter is allowing Blue subscribers to customize their navigation bar as per their liking. They will be able to add up to six buttons to the navigation bar, including Home, Messages, Spaces, Top Articles, Notifications, Profile, Bookmarks, Search, and more. This is an iOS-only feature as of now.