Skip to content
Advertisement
Trusted By Millions
Independent, Expert Android News You Can Trust, Since 2010
Publishing More Android Than Anyone Else
32
Today
133
This Week
545
This Month
7011
This Year
116970
All Time
Advertisement The tablet market saw a massive surge last year as people sought new devices and tools to work and learn from home amid a global health crisis. The market grew for five consecutive quarters since the second quarter last year. But as the pandemic subsided, demand for tablets has come down as well. That’s evident from the latest data estimates from research firm Canalys. According to the new report, tablet shipments fell 15 percent year on year (YoY) in Q3 2021.

A total of 37.7 million tablets were shipped this past quarter, Canalys’ data estimates show. The figure for Q3 2020 came in at 44.2 million. As expected, the firm attributes this decline to dropping demand for tablets “to support consumer and education use cases” in the post-pandemic era. But the numbers are still “well above” pre-pandemic levels when the tablet market saw long periods of decline.

A region-wise breakdown of shipment data shows that demand for tablets has come down in almost all regions. Europe, Middle East, and Africa (EMEA) regions performed the worst during the period between July to September 2o21 when compared to the same period a year earlier, with shipments declining 27 percent YoY. North America saw a 24 percent decline, while China registered a 14 percent drop. Tablet shipments in Latin America remained largely unchanged in Q3 2021.

The Asia Pacific (APAC) region, however, saw a strong 23 percent YoY growth. This is due to “the large device penetration gap” in the region, Canalys notes. APAC’s “preference for tablets as a learning tool, demand is expected to persist until early next year.” 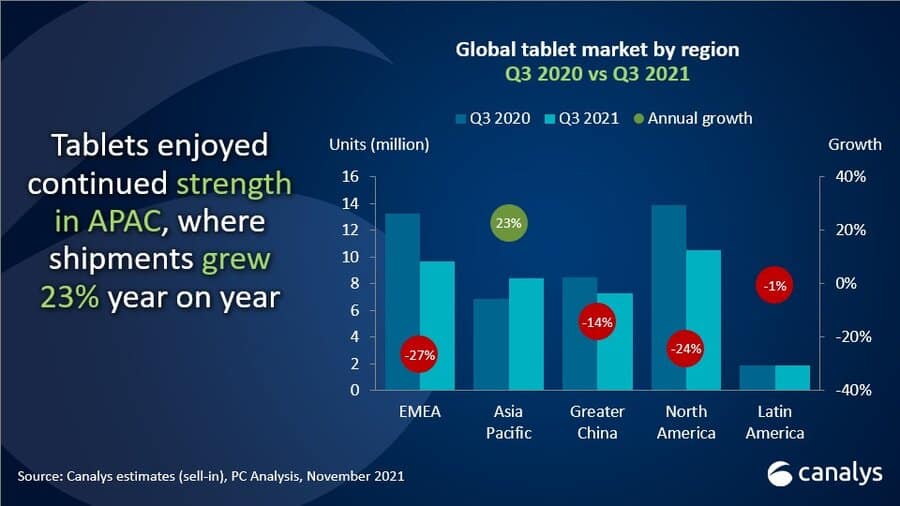 The latest report also looks at the performance of various tablet vendors in Q3 2021. Apple is still the undisputed king in this market. The company shipped as many tablets this past quarter as it did during the same period last year (15.2 million).

Samsung, which has been the largest non-Apple tablet vendor for some time now, held on to its position despite a notable 20.2 percent decline in shipments. Amazon and Huawei also saw massive declines of 44.5 percent and 50.9 percent respectively. This allowed Lenovo to leapfrog the two into the third spot. The Chinese firm registered a two percent annual growth in tablet shipments in Q3 2021.

Despite a significant decline this past quarter, Canalys expects tablets to be much more popular going forward than they were before the pandemic. “Even if many choose not to upgrade their tablets in the coming years, shipment volumes are set to be elevated above what was expected prior to 2020,” said Canalys Analyst Himani Mukka. 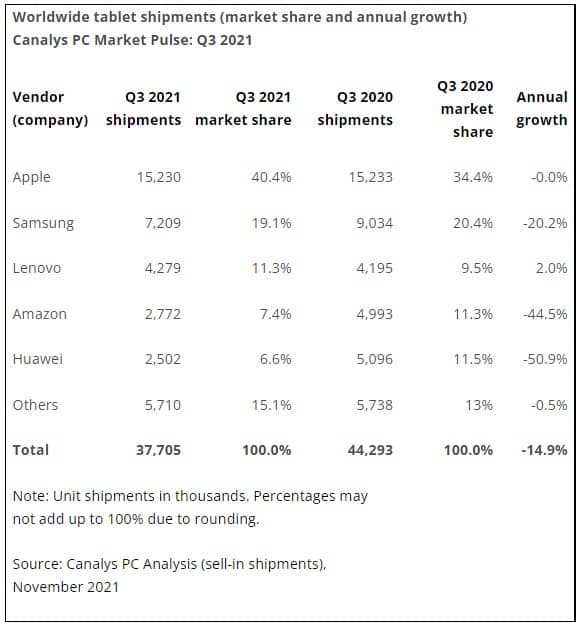