Skip to content
Advertisement
Trusted By Millions
Independent, Expert Android News You Can Trust, Since 2010
Publishing More Android Than Anyone Else
3
Today
189
This Week
600
This Month
7056
This Year
117015
All Time
Advertisement Samsung is the only name that pops up when we talk about Android tablets. Yes! There are other brands coming with their Android tablets somewhere in between, but the main player in this market is Samsung.

The company earlier launched the Galaxy Tab A7 Lite and the Galaxy Tab S7 FE tablets in India this year. Now, according to the latest report by GSMArena, Samsung is inching closer to the launch of its next generation of tablets.

Although, there is no official word on when Samsung plans to debut its Galaxy Tab A8 tablet, all the information related to it points that it could happen very soon.

The tablet was spotted on the Wi-Fi Alliance certification website with model number SM-X205. The listing also confirms the Galaxy Tab A8 name along with the fact that it supports both 2.4 GHz and 5 GHz Wi-Fi.

Previously, the tablet was spotted on Geekbench. The Geekbench listing confirmed that the Galaxy Tab A8 will be powered by the Unisoc T618 chip under the hood. It will be coupled with 3GB of RAM.

Moreover, the tablet will run Android 11 out of the box with One UI 3.0 on top. This is good news considering the fact that Tab A8 is the company’s budget tablet offering.

Other information about Galaxy Tab A8 includes that it will sport a 10.5-inch TFT display with 1920×1200 pixels resolution. Sadly, you won’t get a high-refresh-rate display, as it is limited to 60Hz.

The tablet will come with thick bezels and will house a 5MP shooter for selfies. The camera seems decent enough for those video calls you may purchase the device for.

Casual photographers would be excited to note that there will be an 8MP camera at the back of the device. The tablet will be juiced by a 7,040 mAh battery and will be available in Gold, Grey, and Silver colors.

The only information probably that is wrapped about the device is the official launch date, which may soon be revealed. 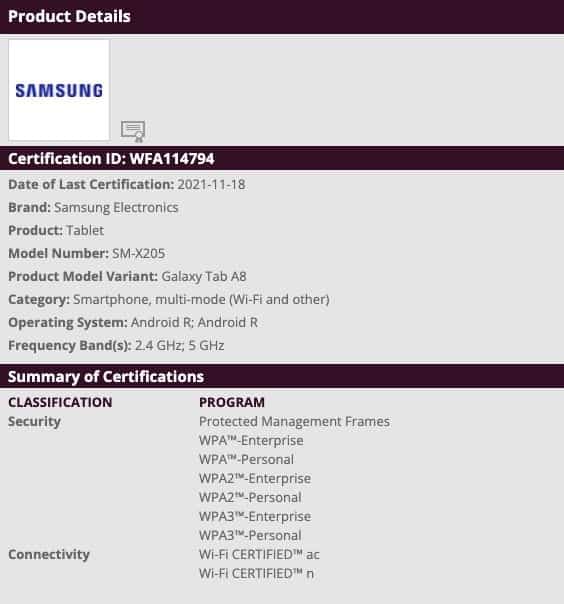