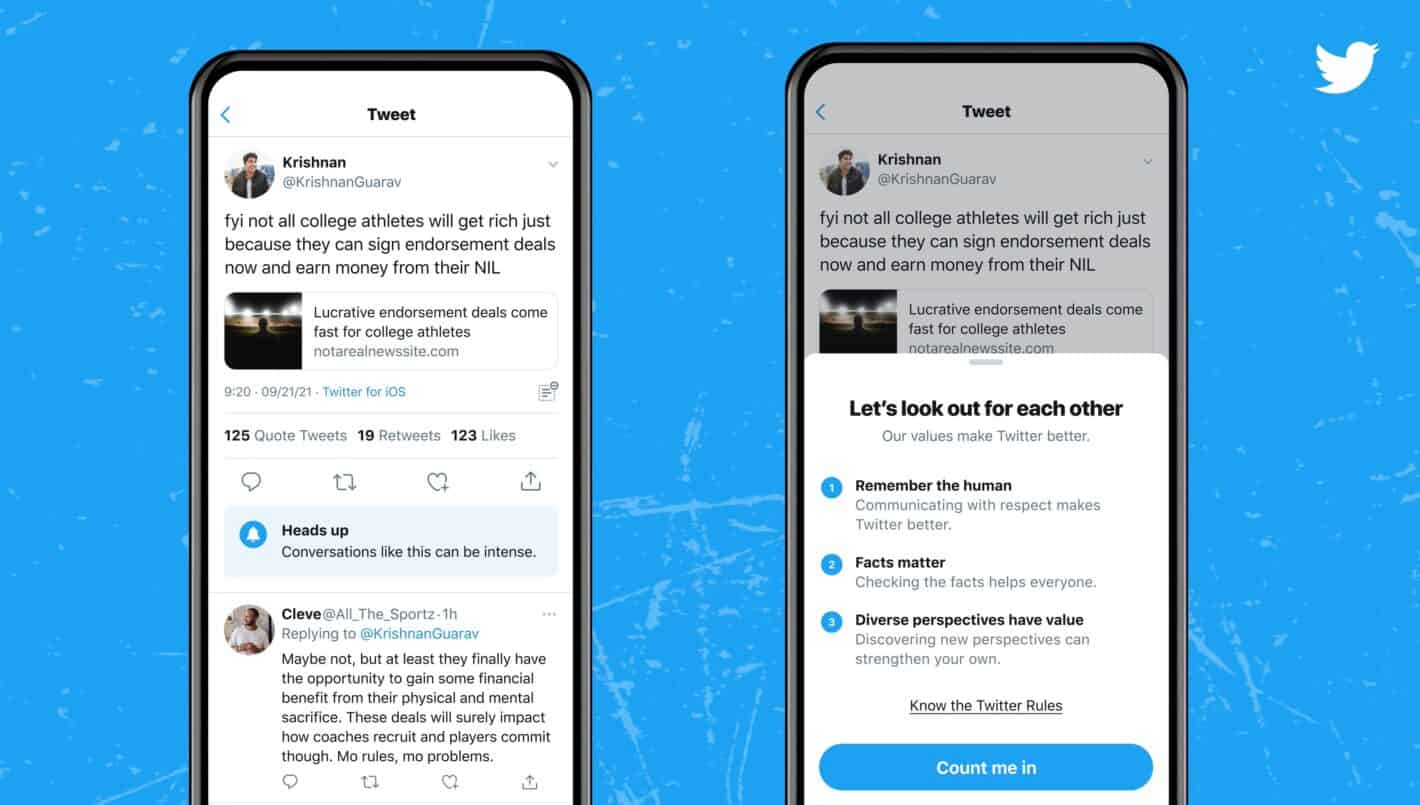 Twitter is testing an interesting new feature to minimize harassment or unhealthy conversations on the platform. The company will warn users that certain conversations could get heated or intense so they can make a wise decision about whether to respond. It will give users a heads up if they are about to enter such conversations. “Conversations like this can be intense,” a persistent ‘Heads up’ banner will appear below the original tweet in a conversation.

Moreover, Twitter will also prompt users to be more considerate of other people’s opinions when replying to such intense conversations. “Let’s look out for each other,” a pop-up will appear before you can type in your reply. It will feature three golden points encouraging healthy conversations.

Firstly, Twitter urges everyone to remember that there’s a human on the other side and that communicating with respect for others makes the platform better for everyone. The company also urges you to check facts before posting something so you don’t help in spreading misinformation or get in unnecessary fights. Lastly, Twitter encourages users to believe in and value diverse perspectives. “Discovering new perspectives can strengthen your own,” the company says. Users can tap the “Count me in” button at the bottom to post their replies.

Twitter had last month said that it’s working on this “heads up” feature to make the platform a better place for everyone. The company is now starting to test the feature among users. It will be first available to users on mobile apps, both Android and iOS. The web version of Twitter will likely pick it up later on.

Replying to a user, Twitter said that it will consider various factors to determine which conversations will show this prompt. This includes the Tweet topic and the relationship between the Tweet author and replied. However, the company notes that this is a work in progress, so things could change over time.

As Twitter says, it is still learning “how to better support healthy conversation” on the platform. “It’s an early test, so we may not get it right every time”. It’s unclear when the feature will roll out widely to users across the world. But in any case, unhealthy conversations can sometimes get out of hand. So it’s always advisable to have empathetic and fact-based conversations, be it on Twitter or any other platform.

Ever want to know the vibe of a conversation before you join in? We’re testing prompts on Android and iOS that give you a heads up if the convo you’re about to enter could get heated or intense.

This is a work in progress as we learn how to better support healthy conversation. pic.twitter.com/x6Nsn3HPu1