According to market research firm Canalys, smartphone shipments in the third quarter this year are down six percent when compared to the same period last year. The ongoing global semiconductor chip shortage is to blame for this slowdown. The report says that smartphone vendors are trying hard to maximize the production of devices. But the “chipset famine has truly arrived,” and the effects of it are now starting to show up in quarterly shipment figures.

Canalys does not expect this chip shortage problem to ease until “well into 2022”. So the shipment figures could look worse in subsequent quarters. Meanwhile, to ensure that OEMs don’t over-order components, chip manufacturers are increasing prices. This will help close the gap between demand and supply.

However, higher costs of key components will also mean higher retail prices of devices. Canalys expects smartphone prices to go up in the coming months. So the upcoming sales holidays may see less aggressive discounts than before.

The new report also breaks down the OEM-wise market share for the top five smartphone vendors in Q3 2021. Samsung tops the chart with a 23 percent market share, unchanged from last year. Apple managed to overtake Xiaomi to the second spot with a 15 percent market share. It had captured 12 percent of the overall smartphone market in Q3 2020. Xiaomi, meanwhile, didn’t see any year-on-year (YoY) changes to its market share (14 percent) during the past quarter. Chinese brands Vivo and OPPO (which now also includes One Plus) make up the top five. 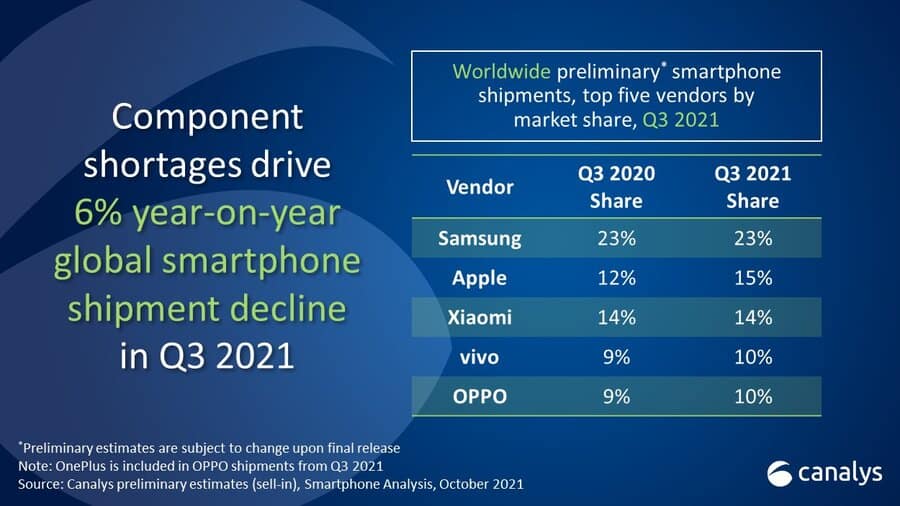 Smartphone shipments are declining globally due to chip shortage

The smartphone industry showed signs of recovery in the early parts of this year following a major slowdown in 2020 due to the COVID-19 pandemic. But just when things started to look promising, an unprecedented chip shortage issue has hit the industry hard. We are now seemingly staring at another slow year in terms of smartphone shipment.

Research firm Counterpoint Research recently lowered its smartphone shipment forecasts for 2021 citing the ongoing chip shortage issue. At the start of the year, the company was expecting a nine percent annual growth in shipment to reach 1.45 billion units. But it has now adjusted the forecasts and expects shipments to grow about six percent YoY to 1.41 billion units.

The report suggested that vendors are receiving less than 80 percent of the requested volume of key components. The issue is getting worse over time. With no immediate solution in sight, the global smartphone shipment may continue to shrink for the foreseeable future.