Samsung has recently sent out an update for the month of November to the Galaxy Watch 4, as reported by 9To5Google. The update is likely hitting a wider rollout within the last few days, but this is an update which started being sent out last week.

For reference, last week’s rollout of the update was for devices in South Korea. It did also contain all of the same improvements. So this is the same update, with the build number being R8xxXXU1DUJA.

Better heart rate tracking is probably one of the bigger improvements of this update. And seeing as it’s more functional than some of the other changes, it’s likely to be the most useful for the majority of users.

But there are some fun changes too. There are a handful of new watch faces you can apply to the watch after updating. According to Samsung’s changelog in the Galaxy Wearable app, the watch will now support four types of new watch faces. Samsung doesn’t list what the new faces are, but if you remember what wasn’t there before updating then you should be able to figure it out.

There’s also now improvements that have been made to the Together, AR Emoji, and Bitmoji watch faces. The My Photo watch face supports GIFs now as well, and the Animal, Cute Character watch face received some improvements.

In addition, the watch can now remember the watch face settings you had applied should you need to reset your watch, or disconnect it so you can reconnect it to a new device. It’ll even remember the order of the watch faces. This all works through a backup and restoration feature. So you’ll need to backup the watch face order and settings. This update also includes security improvements. You can view the full changelog below. 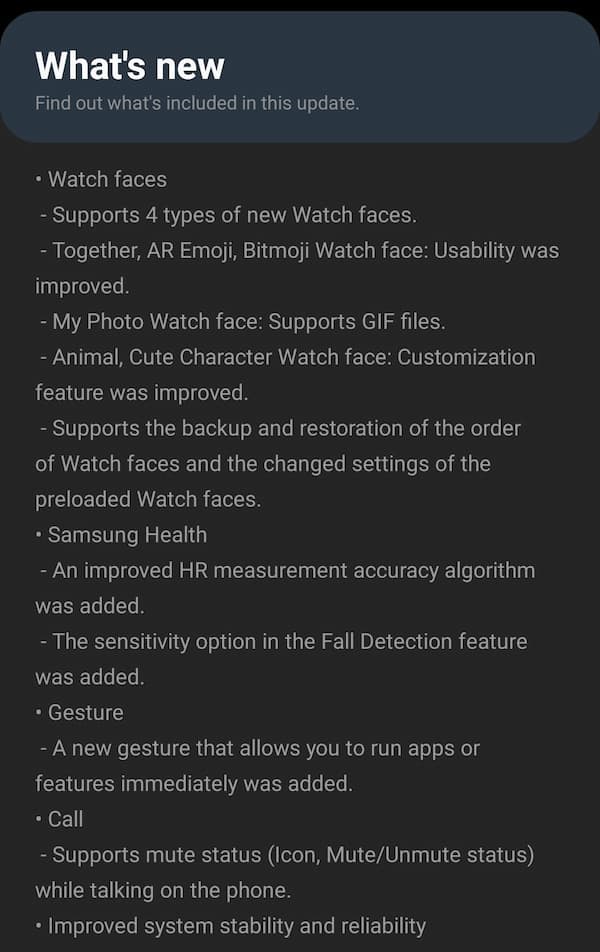