The OnePlus 9 RT could ship with the Snapdragon 888 SoC after all. Several previous reports suggested that OnePlus will use the Snapdragon 870 inside of this phone, but that may not be the case.

A new OnePlus smartphone surfaced on Geekbench, and it’s presumed to be the 9 RT. That device is fueled by the Snapdragon 888, reports MySmartPrice. The device is marked as ‘MT2110’ on Geekbench.

Now, aside from the SoC, that is the Snapdragon 888, Geekbench also reports that this handset will include 12GB of RAM. This could be just one variant of it, OnePlus could announce an 8GB RAM model as well.

Android 11 is also mentioned on Geekbench, and OnePlus’ OxygenOS will come pre-installed on it, of course. This handset managed to score 818 points in the single-core benchmark, and 3,246 points in the multi-core test.

That is pretty much all the information that Geekbench revealed. Previous rumors did suggest that the device will feature a 6.55-inch fullHD+ AMOLED display with a 120Hz refresh rate.

The device is said to arrive in three variants

The OnePlus 9 RT could arrive in three variants. 128GB and 256GB storage models will arrive with 8GB of RAM. A 12GB RAM model will include 256GB of storage, that is the only variant with 12GB of RAM that will be available.

A 4,500mAh battery was also mentioned, and the phone will allegedly support 65W fast charging. That is pretty much all the information that has surfaced thus far.

This handset is rumored to arrive in October, but we still don’t know when. It’s supposed to launch as a replacement for the company’s T series smartphone, which won’t arrive this year. We still don’t know in which markets will OnePlus offer the 9 RT. 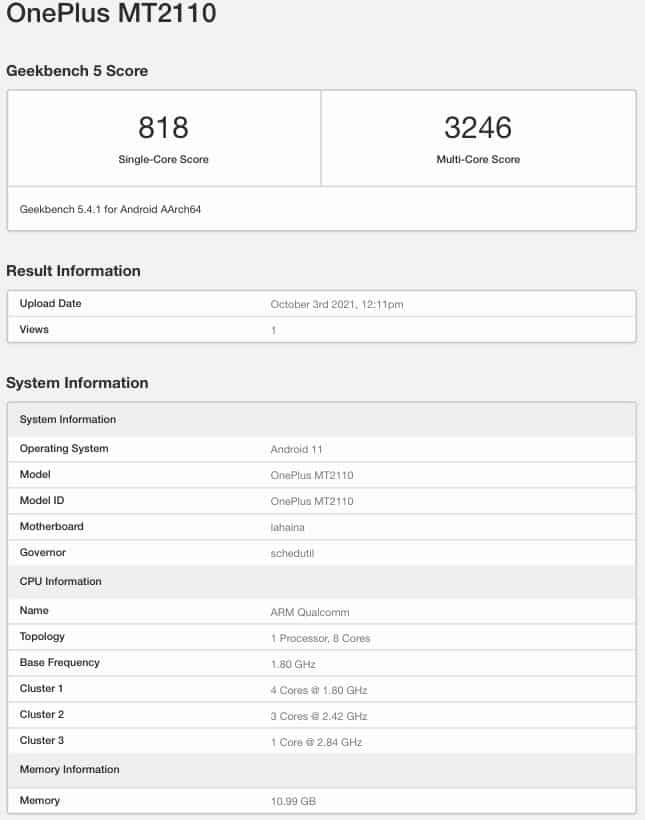