Nokia is preparing to unveil its second-ever tablet offering later this week, on October 6th, to be precise. Expected to be called the Nokia T20, a teaser posted by the company last week showed us a glimpse of the upcoming device. Now, just days ahead of its launch, we have a much better look at the tablet, thanks to Vietnamese publication Zingnews.vn.

The portal pre-maturely announced the launch of the Nokia T20 and also published an image of the tablet. While they soon realized their mistake and took down the article, Finnish publication SoumiMobiili has got hold of the image from one of their readers. It gives us a closer look at both the front and the rear of the upcoming Nokia tablet.

As you can see in the attached image below, the Nokia T20 features rounded corners with flatter edges. The display also largely keeps the same radius of curvature around corners. Nokia has evenly spaced the bezels around the display, allowing for a uniform look. There’s a single camera at the front. It will be at the top when the tablet is held in landscape orientation.

On the back, we have another camera with an LED flash. The back panel also features the Nokia branding sideways. We can see a physical button and a speaker grille on the top edge (when held in portrait orientation). Last but not least, there appears to be a 3.5mm headphone jack at the bottom, on the left corner. 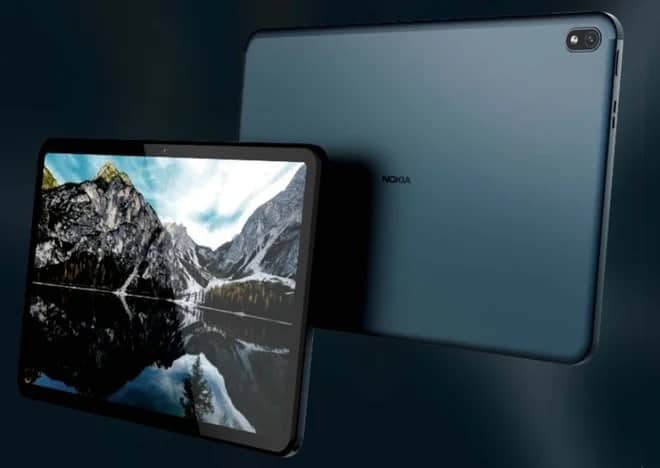 The Nokia T20 has been in the news for some time now. Multiple leaks and rumors in the past have revealed that the tablet will sport a 10.36-inch LCD screen with a 1200×1916 pixels resolution. We are expecting a Unisoc T610 processor with at least 4GB of RAM and 64GB of storage. The device will run Android 11 out of the box.

The upcoming Nokia tablet will be available in both Wi-Fi only and 4G LTE variants. The former will reportedly start at £185 (around €217), while the latter could cost around £202 (€237). These are, of course, unconfirmed pricing details. Nokia has yet to reveal the pricing structure for the new tablet.

As this leaked render reveals, the Nokia T20 will come in a blue color variant. It’s unclear if the company will also offer that tablet in other color options. We shall see in a couple of days now. Stay tuned for the official announcement later this week.