Motorola seems to have already started working on a successor to the Moto G50 5G launched in late August. Aptly named Moto G51 5G, the upcoming device has popped up on benchmarking website Geekbench, revealing its processor details. It appears the Lenovo-owned company is switching from a MediaTek to a Qualcomm chipset for the new phone.

The Moto G50 5G is powered by MediaTek’s Dimensity 700 SoC. Announced in November last year, it is a fairly capable 7nm mid-range 5G chipset that has found its way into numerous devices so far. This chipset has two ARM Cortex-A76 CPU cores operating at 2.2GHz and six Cortex-A55 cores at 2GHz. It features the ARM Mali-G75 MC2 GPU for graphics duties.

But, for reasons best known to Motorola, or perhaps due to the ongoing chip shortage issue, the company is now switching to Qualcomm’s Snapdragon 750G processor for the Moto G51 5G. This chipset also arrived around the same time as the Dimensity 700 but is built on an older, 8nm process. It has its CPU cores running at up to 2.21GHz, with an Adreno 619 GPU handling the graphics.

The Geekbench listing revealed that the Moto G51 5G will arrive with 4GB of RAM. There could also be a 6GB RAM variant though. The phone will run Android 11 out of the box. This suggests that Motorola is planning to launch it before the end of this year, or at least early next year. With Android 12 already official, it would be disappointing to see a new phone launching with Android 11 deep into 2022. That’s about it as far as Moto G51 5G info revealed in this Geekbench listing is concerned.

Motorola has several new devices in the works

Motorola has been releasing new smartphones quite frequently in recent times, flooding the market with options at every price point. Over the past few weeks, the company has launched two budget phones in the form of the Android Go-powered Moto E20 and the full-fledged Android smartphone Moto G Pure. It now seems to be working on the Moto E30 and Moto E40, both of which are Android Go devices. These devices have leaked extensively recently.

The Moto G51 is another smartphone Motorola currently has in development. This is the first time the device has appeared online. So we don’t know much else about it as yet. But as the company progresses with its development, we can expect to see more of it. We will keep you updated as and when we have more information. 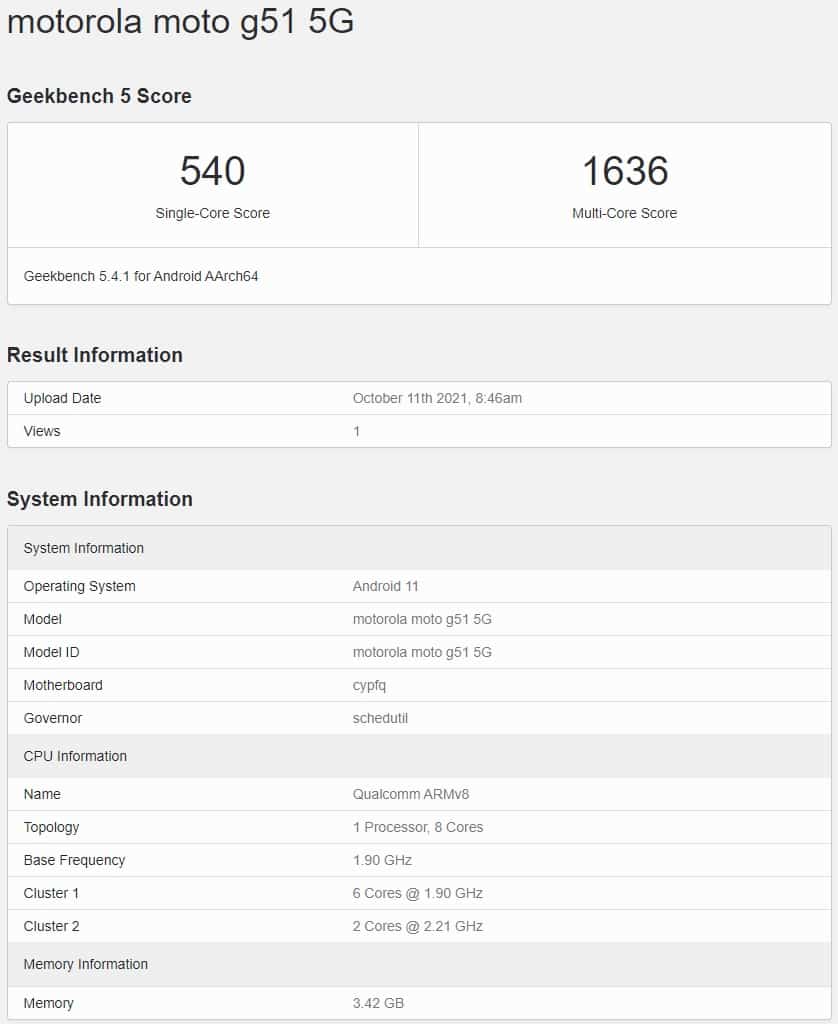