The game was a surprisingly exciting experience from start to finish.

Going into Marvel’s Guardians Of The Galaxy, I had a very different perspective of what the experience would be like from when I was done with it. Sure, I thought I would have some fun playing the game. What I wasn’t expecting was to thoroughly enjoy myself thanks to the edge of your seat gameplay.

Very few moments throughout my initial playthrough (I had so much fun I plan to play it again on PS5) did I find myself thinking, “this could have been done better.” Most of the time, I was in awe at how good combat felt or how awesome it was to be flying around through space in the Milano – the Guardians’ iconic ship.

In Marvel’s Guardians Of The Galaxy you play as Peter Quill, more commonly known as Star-Lord. As you travel alongside the rest of the Guardians crew from job to base to job again. Much of the game is held together by moment to moment action. Peppered with environmental puzzles and the kind of witty dialogue you’d expect from conversations between Quill, Drax, Rocket, Gamora, and Groot.

There’s also a fair bit of exploration included. Whether it’s you walking around a seemingly empty space port or the lively city of Knowhere. While at times it feels like the game has trouble slowing down, you do get some moments of reprieve. Which usually consist of you trying to hunt down collectibles and character outfits. Or simply enjoying the collection of 80s tunes that make up the soundtrack. 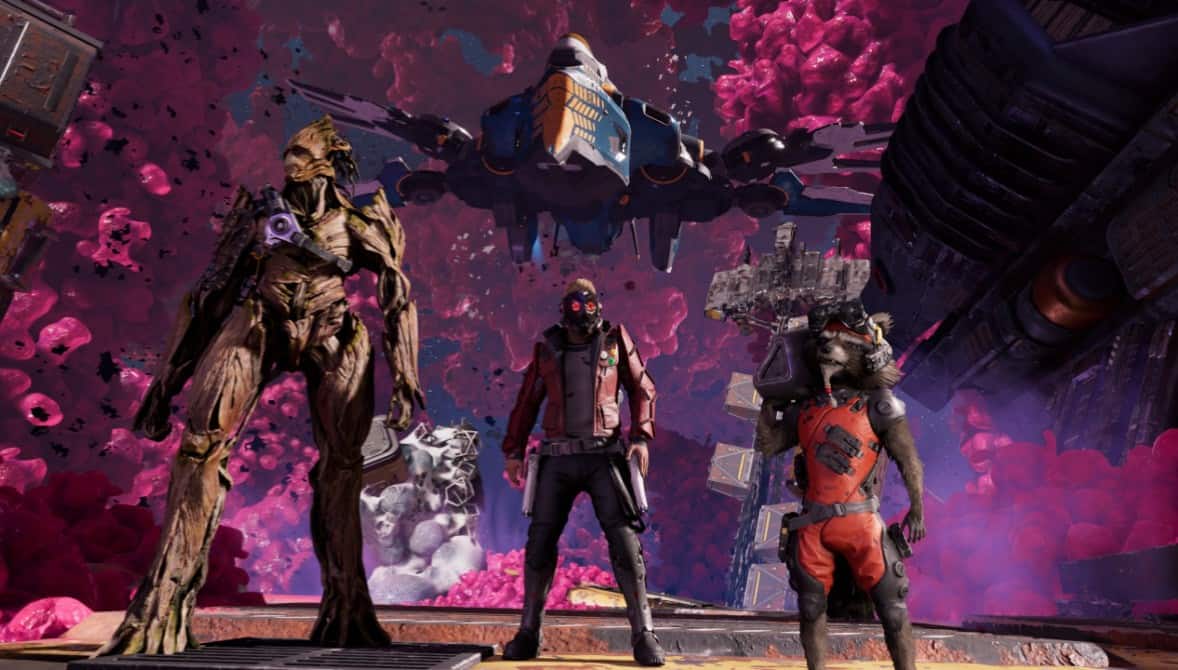 I didn’t have high hopes for characters in the game living up to their loveable on-screen personas. But after playing the game it’s clear that Square Enix and Eidos Montreal weren’t really trying to measure up to those portrayals. Rather, they created a version of them that is somewhat unique to their own vision.

Although, the characters are not so far removed from what you know. And it’s this familiarity that really had me loving just about every minute of the game. Don’t get me wrong, the combat is good. Really good, in fact. But throughout the early hours of the game, it was the back and forth banter between members of the crew that pulled me in and kept me wanting more.

A little quip from Drax about Peter Quill here. A snarky comment from Rocket there. These conversational moments were so well done that I wanted to go back and replay certain parts of a level just to hear them again. And this character foundation is what sets the stage for the rest of the game’s tone.

It’s not all comedy and space battles, there’s some truly emotional moments 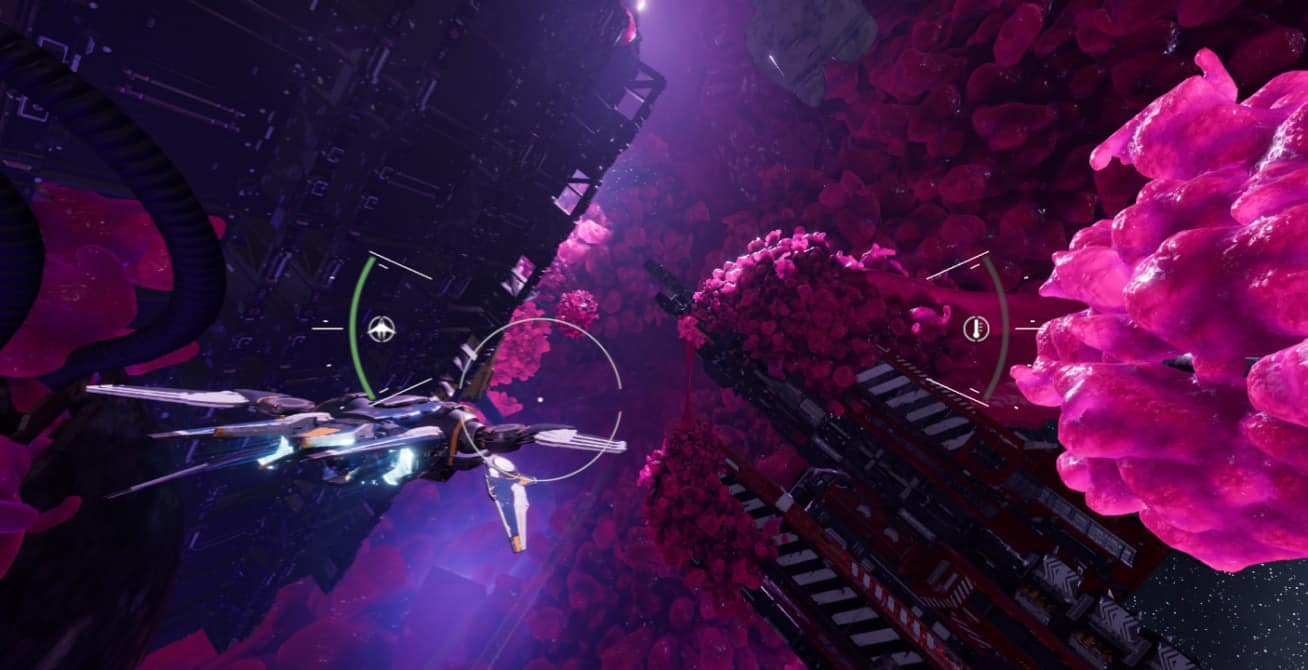 I’ve been brought to tears in games a few times. Most recently with Ghost of Tsushima. But I had no idea that Guardians Of The Galaxy was going to tug at my heartstrings.

Eidos Montreal stays mostly true to the comedic aura that Quill and the others put off. But don’t be surprised if you get a little bit weepy from time to time. These moments of emotional distress serve to anchor the game a little more in reality. Making things feel just a little more human and relatable.

And they were actually a really nice way to break up the constant excitement of combat and more casual instances of jokes and level discovery. Even if you don’t play games for these down to earth moments, you might find them just as enjoyable as I did.

The game was not without its technical problems

I didn’t experience many issues in my PC build of the game that I used for review. But there were some minor problems with audio early on that impacted things. Throughout the game’s first few chapters, cutscenes would often drop audio dialogue to a low and muted or almost muffled state.

At first I thought that maybe this was intended, but I quickly realized that this was just an issue with the cutscene audio not playing properly. This did eventually sort itself out, but it made hearing any of the conversations during those early cutscenes difficult. And I had to turn down music and other sounds just to pick things up.

Thankfully this should be a problem that goes away with the game’s day one patch. Some of my favorite aspects of the game are wrapped up in player choice.

In every battle you’ll need to make decisions on how you dispatch enemies. You can take them on as Star-Lord alone. But that would be a great disservice to the way combat was designed. You’re meant to also control your team and their actions in battle.

Much like in Final Fantasy VII Remake, you can hit a button and pull up your character roster and then dole out attacks from the team. This also makes combat way more exciting, because each team member has their own unique abilities that might be better suited to particular fights.

Once more of the abilities were unlocked late-game, my go-to tactic was to have Rocket throw a grenade that sucks in all enemies within range and holds them for a couple seconds – Just enough time to initiate Groot’s crowd control ability where he wraps enemies up in branches.

From there I could rush over with Star-Lord and unleash his Eye Of The Hurricane ability. Which rains down a torrent of grenades that deal major area of effect damage and stagger enemies. You’ll also get occasional moments where you can initiate tag-team attacks that really do some damage, but also reiterate that you’re fighting as a team. And teams stick together. This helps make fighting feel like you’re never going it alone and that there’s always someone there to watch your back. Almost as if you’re playing with a friend.

Take a second to think about the dialogue choices

Outside of combat, there’s actually loads of dialogue choices you can make in conversation. And depending on how you respond these can lead to Groot, Rocket, Gamora, and Drax performing actions on their own later in the game. When you might otherwise have had to ask them to do something.

These shifts in attitude and interaction between the characters add levels of realism that are unexpected. And at times, downright wholesome. Because one moment you’re jetting around some corner of the galaxy shooting at aliens. And the next you’re having heart to hearts or arguments with the crew. Just as you might have a heartfelt conversation with a friend, driven by each other’s growing bonds and shared understanding of one another.

Those emotional moments I spoke of earlier? These are part of that. And it’s the last thing I thought I’d find in a game about galactic mercenaries turned super heroes. But a welcomed surprise all the same.

Marvel’s Guardians of The Galaxy was an energetic thrill ride. Period. The game caught a lot of flak after its reveal. But after having played through it, I’m entirely convinced that most or all of it was without merit.

The characters are likeable, the story is attention grabbing at just about every turn, and there’s a nice balance between the game’s action-based combat and critical decision making.

When you get right down to it, Square Enix and Eidos Montreal have delivered a game that (deservedly) is some of the most fun I’ve had in a game all year.