Huawei has announced a new addition to its smartwatch family, the Huawei Watch GT 3. This smartwatch is a direct successor to the Watch GT 2 that has been quite popular for the company. It does resemble its predecessor a bit, but it also delivers a number of improvements.

In regards to its specifications, it’s quite similar to the Watch 3 the company announced, and that’s not a bad thing at all. It has that rotating crown on the right, while HarmonyOS 2.1 comes pre-installed.

The Huawei Watch GT 3 is official, and it comes in two different sizes

The company announced two different sizes of this smartwatch, which also look different. The 42mm and 46mm variants are available, with 1.32-inch and 1.43-inch displays. Both utilize an AMOLED display, by the way.

There are a number of watch faces installed on each smartwatch, and tons more are available on the Huawei Watch Face Store. You’ll actually find some animated watch faces pre-installed as well.

Huawei included L1 and L5 dual-band GPS here, in addition to Beidou GLONASS, Galileo, and QZSS satellite systems for offline navigation. The watch also offers a Route Back feature that can guide you back where you came from, if you get lost.

It does support wireless charging, unlike its predecessor

This smartwatch also supports wireless charging, unlike its predecessor which came with POGO pins. The company claims that the larger variant of the watch will last up to 14 days, while the smaller up to 7 days.

Both watches include 4GB of internal storage, and 32GB of RAM. They are compatible with devices that run Android 6.0 or later, iOS 9.0 or later, and HarmonyOS 2 or later.

An accelerometer is included, as is a gyroscope, and a geomagnetic sensor. An Air pressure sensor is also here, along with a temperature sensor, a microphone, and a speaker.

These two smartwatches support over 100 workout modes with automatic exercise detection for the 6 most common types of workouts. Bluetooth 5.2 is included here.

The 42mm variant comes in Active Black, Classic White, and Elite Light Gold colors. The pricing for that variant starts at €229 and it goes up from there, based on the version.

The 46mm model comes in Black, Classic Brown, and Elite Titanium Steel variants. Its pricing starts at €249, and it goes up from there.

The Huawei Watch GT 3 is already up for pre-order in Europe, and it will go on sale on November 11. 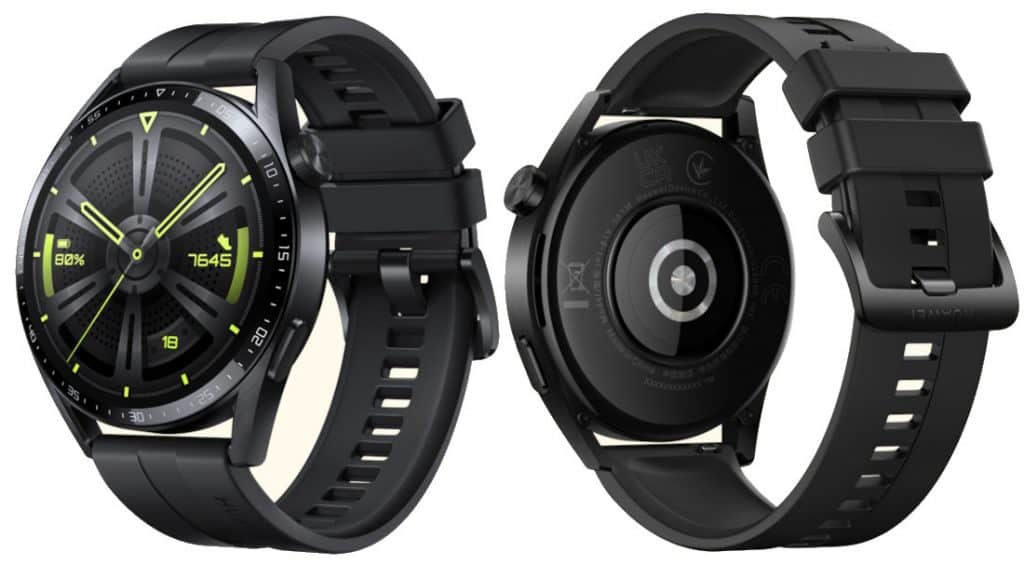