Skip to content
Advertisement
Trusted By Millions
Independent, Expert Android News You Can Trust, Since 2010
Publishing More Android Than Anyone Else
31
Today
132
This Week
544
This Month
7011
This Year
116970
All Time
Advertisement

Google Meet is now getting the much-needed ability to mute all participants in a meeting. This feature is available only to the meeting hosts, with dedicated toggles like “turn on their video” and “turn on their microphone.” This feature will be off by default, but hosts can turn it on/off during meetings.

“This feature gives meeting hosts more control over their meetings by letting them decide when they want to allow different levels of participation from attendees, for example to address disruptive participants,” Google said of the feature.

Google is rolling out this feature gradually, but it should reach all users over the next few weeks. The feature requires the most recent version of the Google Meet or the Gmail app. The company said it would bring this feature to both iOS and Android customers.

When enabled, users with incompatible app versions are removed from the meeting

Participants are removed from the meeting if they don’t have the latest version of either app. If users try to join another call with these locks enabled, Google will prompt them to update the app to the latest version. Meanwhile, participants on incompatible app versions can rejoin the call when the audio/video lock is off.

These features will help meeting hosts maintain greater control over the call participants. Google first launched the ability to mute every call participant on the desktop version of Google Meet in February. 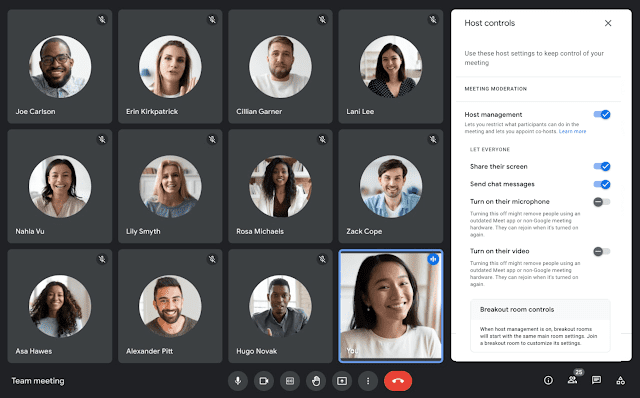 As for the new locks, the company said the preferences set by the host in the main meeting would apply to future breakout rooms as well. Google said the audio and video locks would roll out to G Suite Basic, Business, and all Google Workspace users.

The company has been busy over the past few months with some handy additions to its suite of productivity apps. In June, Google opened Workspace and Google Chat to everyone, making it available to anybody with a Gmail account.

At the Google Cloud Next conference earlier this month, the company said that Workspace has over 3 billion users. However, this figure doesn’t account for people with multiple Google accounts. Regardless, it’s clear that Workspace has positioned itself as one of the best productivity suites out there.