Bluetti has decided to discount its AC300 portable power station for Halloween. The company is offering discounts of up to 20-percent. You can actually save up to $3,900 with bundles.

Before we get into it, it’s worth noting that the Bluetti solar power station launched back in September, along with the B300 external battery. The first batch was sold out within only 2 weeks. 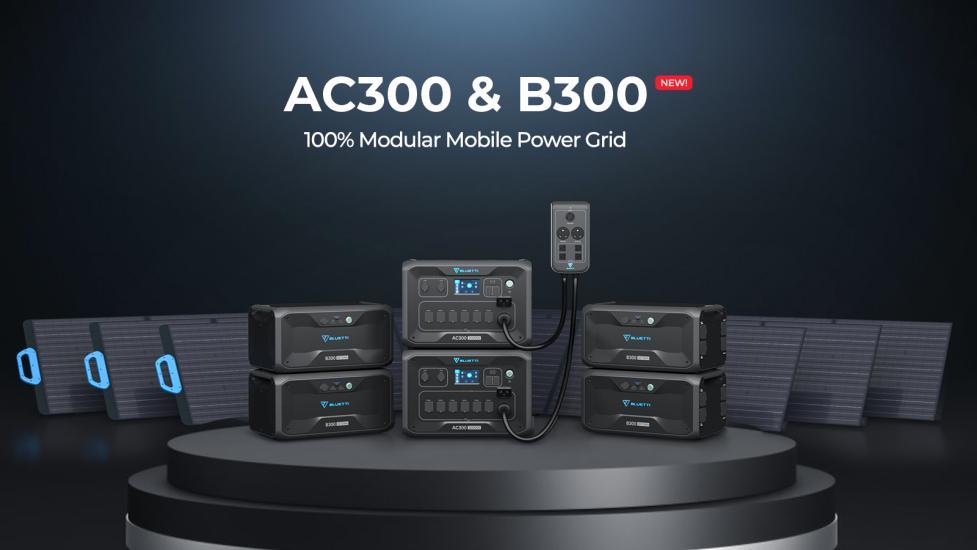 The Bluetti AC300 is a 100-percent modular solar power station. It can accept up to four B300 battery modules, offering plenty of power.

It uses top-of-the-range LFP cells which have 3,500+ life cycles, leading up to 80-percent of the original capacity. This solar power station is capable of receiving 2,400 watts of solar charging input.

While connected to two B300 battery modules, the AC300 can be charged with both solar and AC simultaneously. That adds up to 5,400 watts of charging rate.

This power station also allows the connection of the new Bluetti Fusion Box Pro, which can double the voltage, power, and capacity up to 6,000W, 240v, 24,576Wh.

The Bluetti can be controlled by a complex smartphone app. That app is really simple to use, though, and you can control the device via either WiFi or Bluetooth. 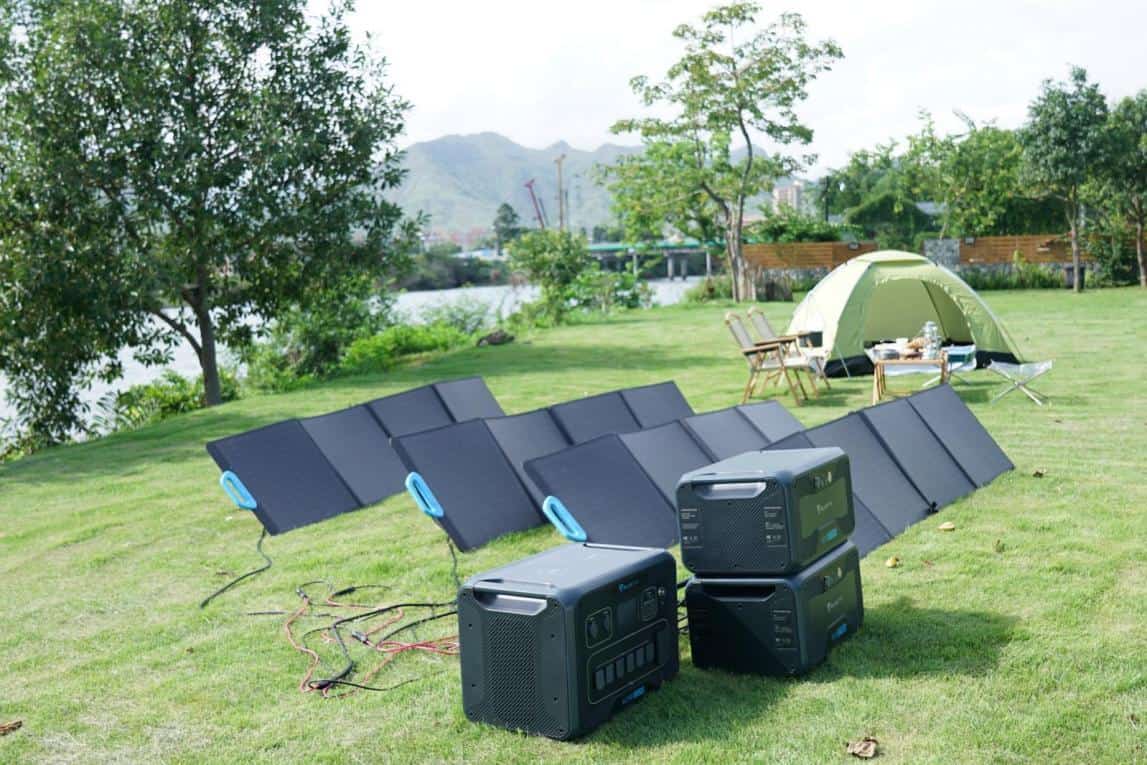 As mentioned earlier, the Bluetti is offering up to $3,900 off for its AC300 bundles. Let’s see what’s on offer. 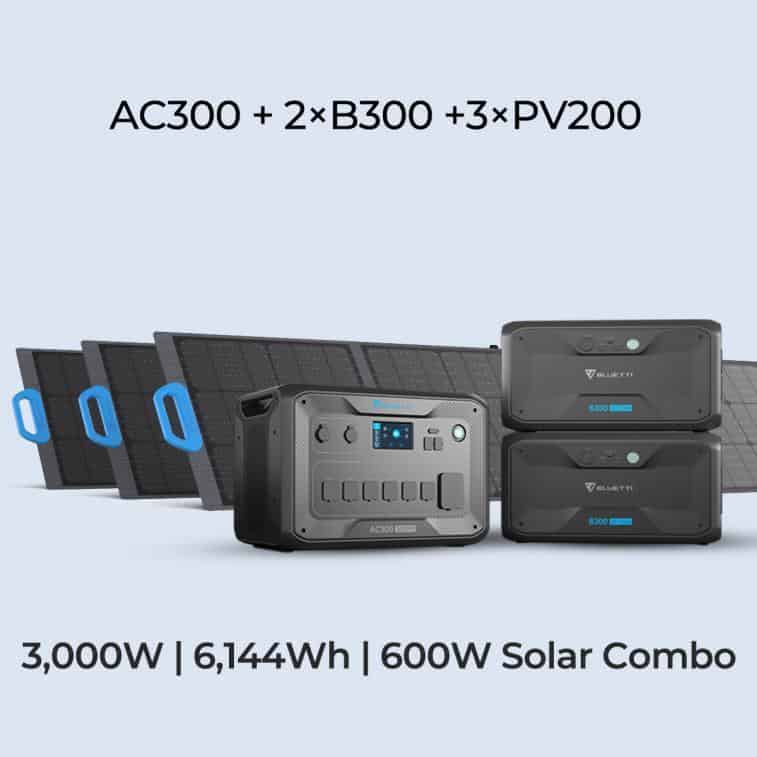 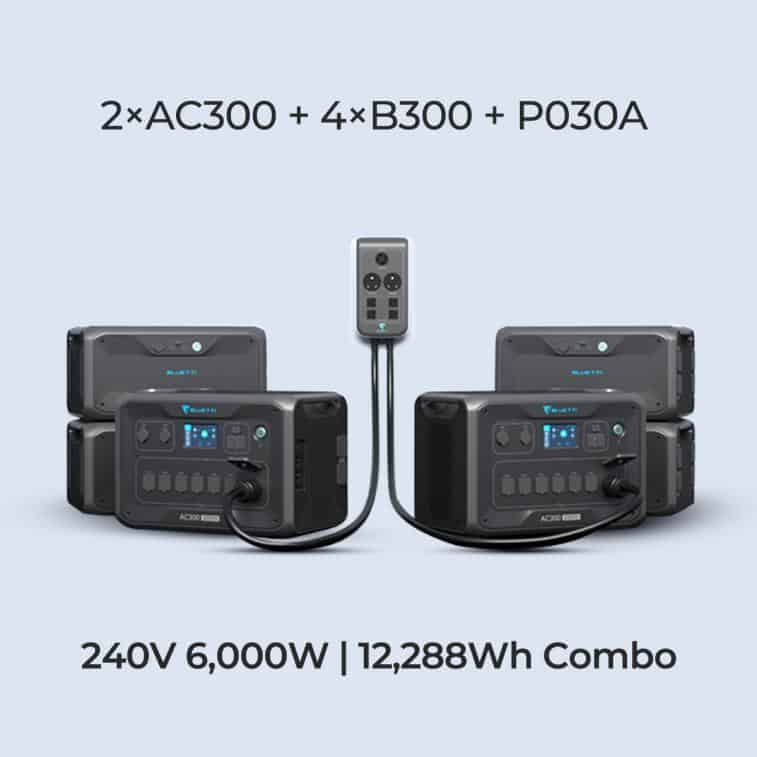 The second bundle includes two Bluetti AC300 solar power stations, four B300 external batteries, and the P030A Fusion Box Pro. This pack can be yours for $8,899, which will save you $2,834. Get this bundle from the link below. 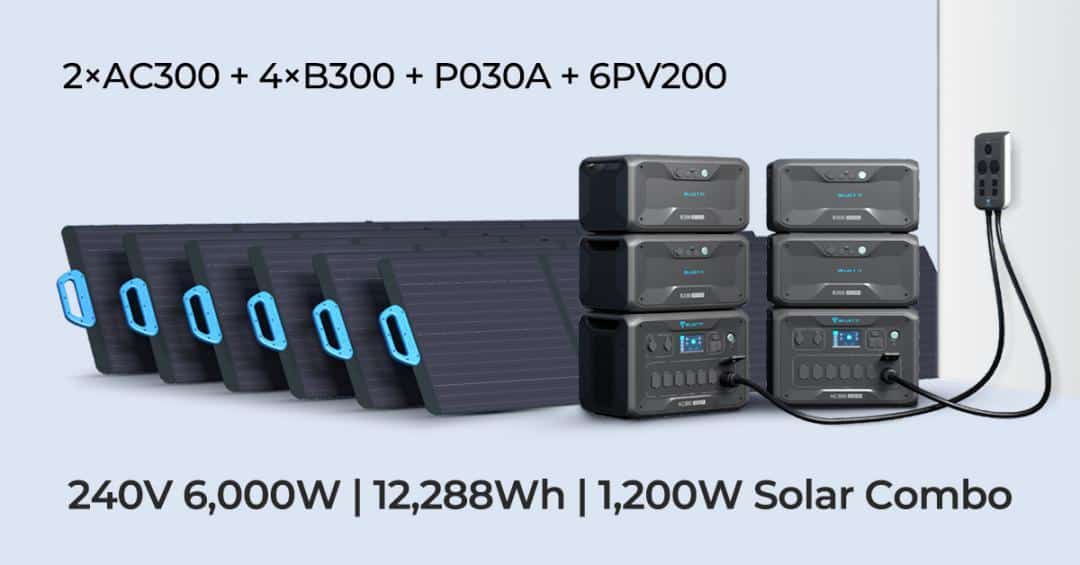 That is not all, as Bluetti has some additional news to share. 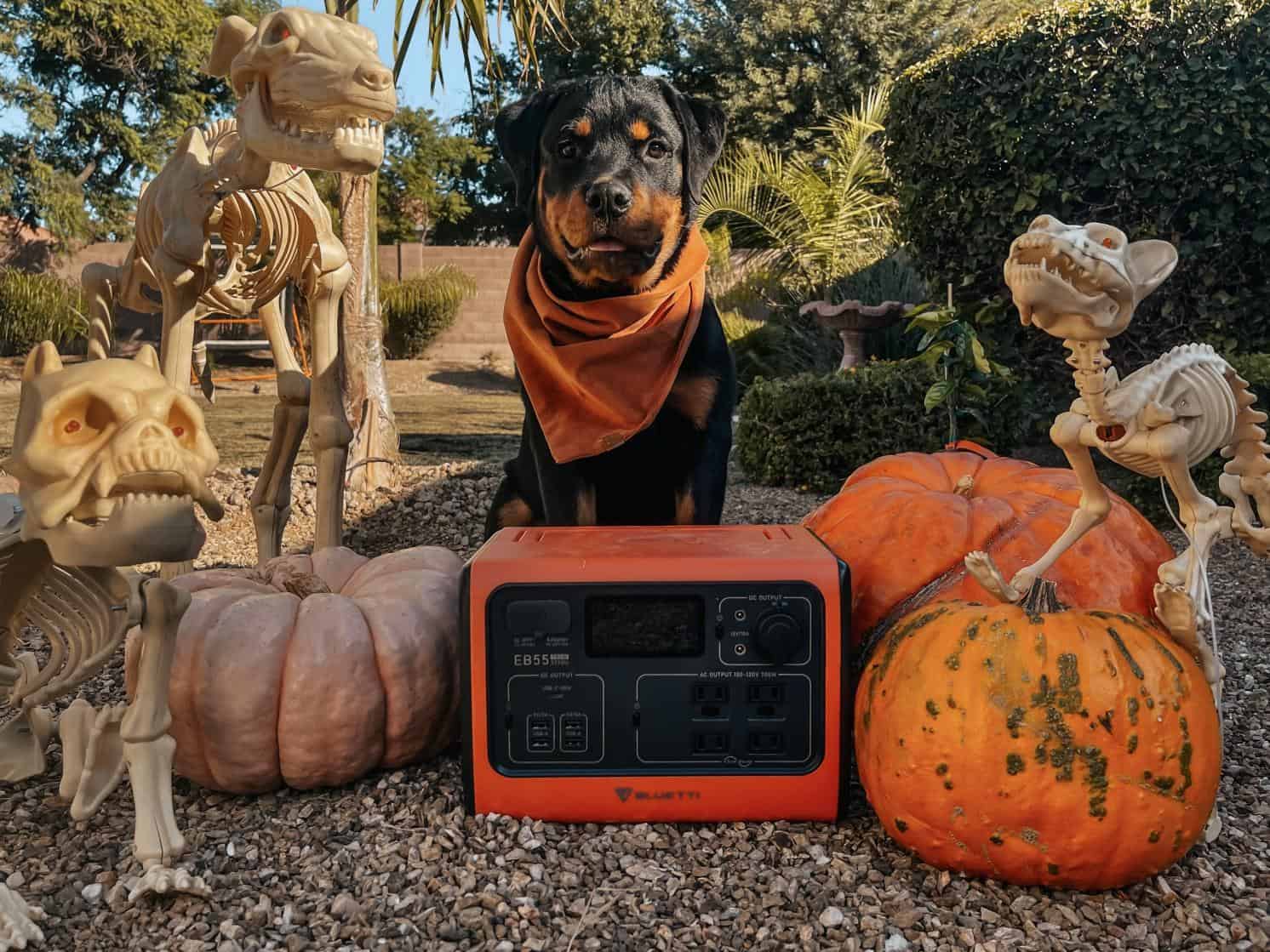 Bluetti is releasing a new, special pumpkin color tone for the EB55 generator. As shown in the image above. This is an ideal generator for camping, it can hold 537Wh of capacity.

This generator uses LiFePO4 battery chemistry, combined with a built-in battery management system for multiple layers of protection. It can be charged and discharged over 2,500 times before reaching its 80-percent capacity.

This generator can be yours for only $449 now. The company is also offering an extra discount for solar panel bundles. Read more about these offers below. 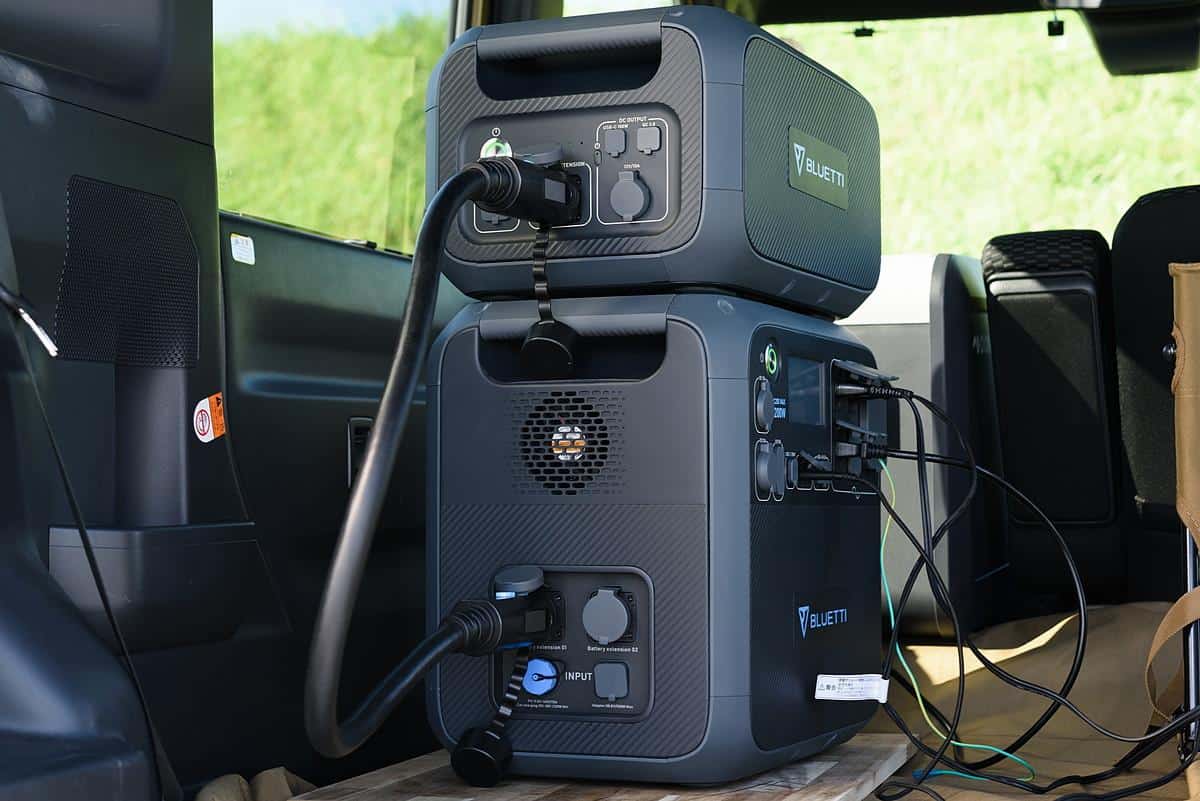 In case you need a solar power station, the AC200 MAX is also on offer, along with the B230 battery modules. The AC200 MAX power station is actually an upgrade of the AC200P, which has been quite popular for the company.

The Bluetti AC200 MAX has a standard built-in 2,048Wh LFP battery pack. It can also be charged and discharged 3,500+ times before it reaches its 80-percent capacity.

An inverter boasting 2,200 watts (4,800 watts surge) of power is included, and the AC200 MAX is able to accept up to 900 watts of solar input, and 500 watts of AC input simultaneously. That means you can technically fully charge it in 2-2.5 hours.

The AC200 MAX can be controlled via an app, though you’ll need to control your phone via Bluetooth in order to do it. There is no WiFi connection here.

For this holiday sale, Bluetti is dropping the price of the AC200 MAX, it is now $200 more affordable. Its pricing starts at $1,899, and you can get it from the link below.

Bluetti’s Halloween sale kicked off already, and it will end on November 4. It is a global event, by the way, so anyone can grab the discounts.