Skip to content
Advertisement
Trusted By Millions
Independent, Expert Android News You Can Trust, Since 2010
Publishing More Android Than Anyone Else
2
Today
2
This Week
346
This Month
4270
This Year
121855
All Time
Advertisement

The all-in-one streaming guide JustWatch has published its latest report on the quarterly performance of the biggest SVOD (Subscription Video On Demand) services, i.e. streaming services, in the US. The report shows the market share of the top seven SVOD services stateside for the third quarter of this year. It also highlights the monthly viewership trend of each service for the past nine months.

Amazon Prime Video is closing the gap on Netflix

Netflix remains the most popular streaming service in the US, capturing 27 percent of the entire market this past quarter. However, the company has been seeing a steady decline in viewership throughout the year. As a result, its market share dropped marginally from 28 percent in the second quarter. This helped Amazon Prime Video close the gap on it.

After a slowdown in the first half of the year, Prime Video has witnessed an upward trend in viewership since July. It still sits on the second spot with a 21 percent market share, up slightly from 20 percent in Q2 2021. But the company has closed down the percentage point gap to Netflix to just six, from eight in the previous quarter.

Next up, we have Disney+ with a 14 percent market share. That’s unchanged from the second quarter but The Walt Disney Company’s streaming service has gained some viewers over the past nine months, the report suggests. Hulu at fourth, meanwhile, has largely remained steady throughout the year, capturing a 13 percent market share.

HBO Max makes up the top five and it is the fastest-growing SVOD service in the US this year, particularly since the beginning of the third quarter. Its market share grew from nine percent in Q2 to ten percent in Q3 2021. 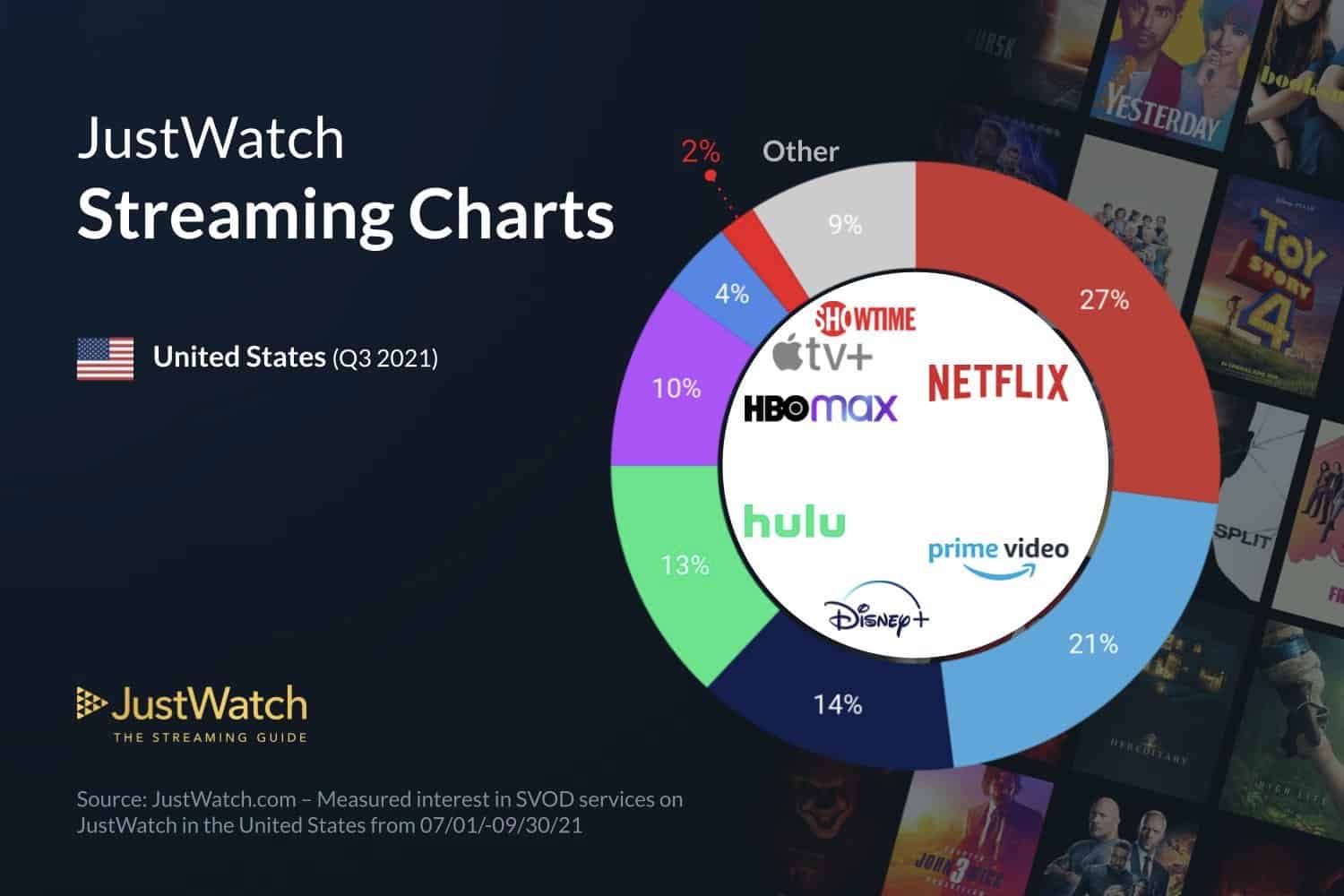 Showtime and Peacock are going down, Paramount+ on the way up

Apple TV+ is the next most popular streaming service to make it into JustWatch’s performance report. It saw marginal growth in viewership this past quarter after failing to gain much traction in the first half of the year. ViacomCBS’ Showtime, meanwhile, is on a downward spiral, and so is NBCUniversal’s Peacock. The latter was the sixth-biggest SVOD service in the US in Q2 2021, sitting above Apple TV+ with a four percent market share. But it has now dropped out of the top nine.

Paramount+, another ViacomCBS-owned streaming service, has gained from its sibling’s loss. The company recently signed up South Park creators Trey Parker and Matt Stone to make 14 exclusive spinoff movies. The first two of those are expected to release on Paramount+ by the end of this year. So we could see it slightly higher on JustWatch’s chart for the fourth quarter. But for Showtime, things are looking ominous. Perhaps that’s why ViacomCBS is offering the two streaming services bundled in a single subscription. Time will tell whether this move reaps the results the company is hoping for. 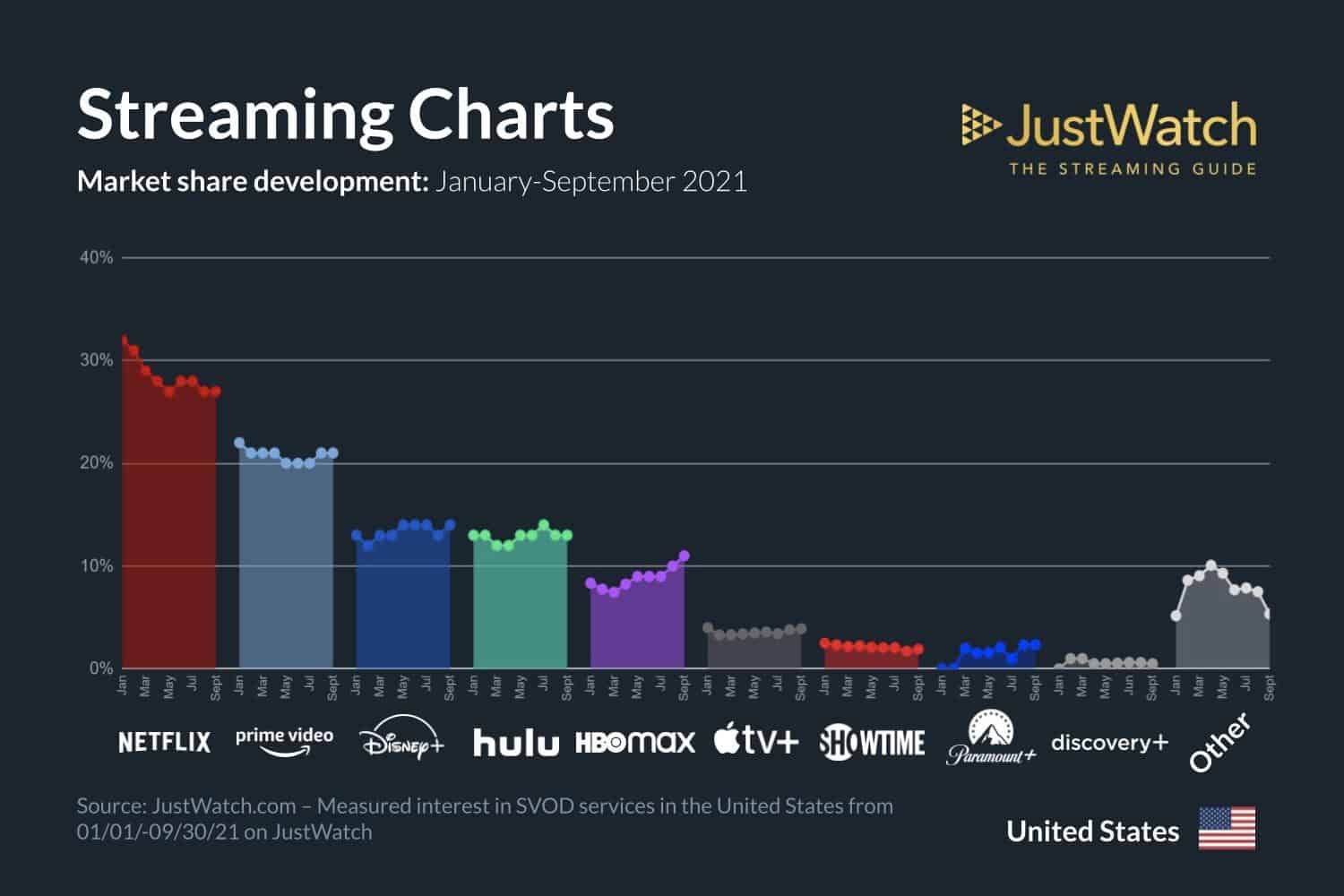