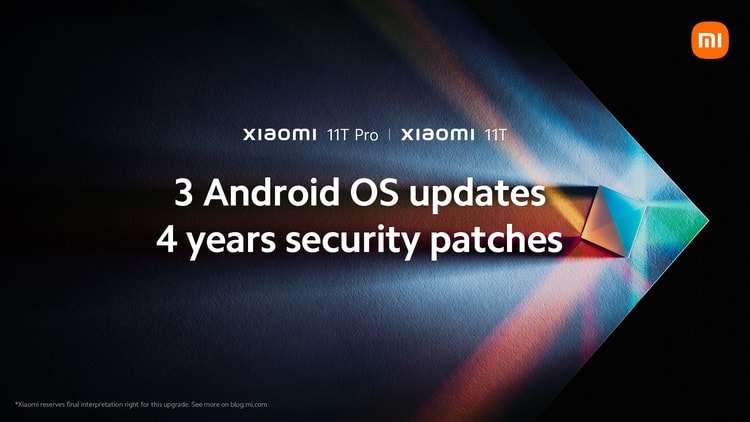 Xiaomi is the latest Android smartphone manufacturer to promise three years of Android OS updates for its phones. The Chinese company has announced that its upcoming flagship series – Xiaomi 11T and 11T Pro – will get three generations of Android system upgrades. It has also promised four years of security updates for the two phones. The announcement comes just days before the new phones go official. Xiaomi is expected to unveil the 11T series on September 15th.

Samsung was the first to announce three years of Android OS updates for its phones last year. OnePlus followed the suit in July this year, and Xiaomi is now jumping on the bandwagon as well. However, neither of these companies are extending this generosity to as many models as Samsung. The Korean firm has promised three generations of Android system upgrades to all its flagships as well as a few mid-rangers. OnePlus is extending the support window for the OnePlus 8 and 9 flagship series.

Xiaomi, on the other hand, is limiting the extension to its upcoming 11T flagships only. The company says it will “evaluate the possibility of bringing the extended Android system and security upgrades services” to more devices in the future. But it also notes that “it is not a simple task” to extend the software support window for all of its previous models. So don’t be hopeful of getting three major Android OS updates on your current Xiaomi smartphone.

Xiaomi recently overtook Samsung as the world’s largest smartphone vendor. The company managed to overthrow the long-term numero uno thanks to its aggressive pricing strategy which its Korean rival can’t match. Xiaomi’s relative disregard of high profit margins, combined with its smaller expenses, allows it to sell a comparable device cheaper than Samsung.

However, Samsung is now preparing to fight back with some major strategic decisions. The Korean behemoth can’t go price-matching with Xiaomi. Instead, it’s looking to make its devices more appealing more advanced features. The company recently confirmed that it’ll remove ads from its stock apps on its phones. It is also said to bring optical image stabilization (OIS) to its lower-cost Galaxy A series phones in 2022. All these measures will improve the user experience on Samsung devices.

Xiaomi knows it can’t just rely on the price factor to keep Samsung at bay. As such, it’s now following the Korean company by extending its software support period for its upcoming flagship phones. Hopefully, it will offer this generosity to more phones down the line.