Samsung has officially launched its long-rumored 200-megapixel smartphone camera. The new ISOCELL HP1 is the world’s first 200-megapixel camera sensor for smartphones. It is a 1/1.22-inch sensor featuring the company’s most advanced 0.64μm-sized pixels. It can produce 50-megapixel or 12.5-megapixel stills using pixel binning technology.

The Samsung ISOCELL HP1 camera sensor features an all-new pixel-binning technology called ChameleonCell. If the “Chameleon” name triggers something, you’re spot on. This technology allows the sensor to adapt to the environment and use a suitable pixel layout as per need. In bright environments, the camera uses the full 200 million 0.64μm pixels to capture 16,384 x 12,288 resolution images that boast an “astonishing amount of detail that helps the image stay sharp even when cropped or resized.”

But as the surrounding gets dark, the sensor uses 2×2 pixel binning (merges four neighboring pixels) to transform into a 50-megapixel camera with 1.28μm-sized pixels. This allows for more light absorption and sensitivity, thus producing brighter and clearer photos. And if it gets even darker, the Samsung ISOCELL HP1 can merge 16 neighboring pixes (4×4 pixel binning) to absorb even more light and maintain the picture quality. It transforms into a 12.5-megapixel camera with 2.56μm-sized pixels.

The new 200MP camera from Samsung can record 8K videos at 30fps (frames per second), with Samsung promising a minimum loss in the field of view. The company says the camera uses 2×2 pixel binning to bring the resolution down to 50-megapixel to take 8K videos. This eliminates the need to crop or scale down the full image resolution.

If you switch to 4K resolution, it records videos at 120fps, and FHD videos at 240fps. The camera uses Double Super PD autofocus technology. 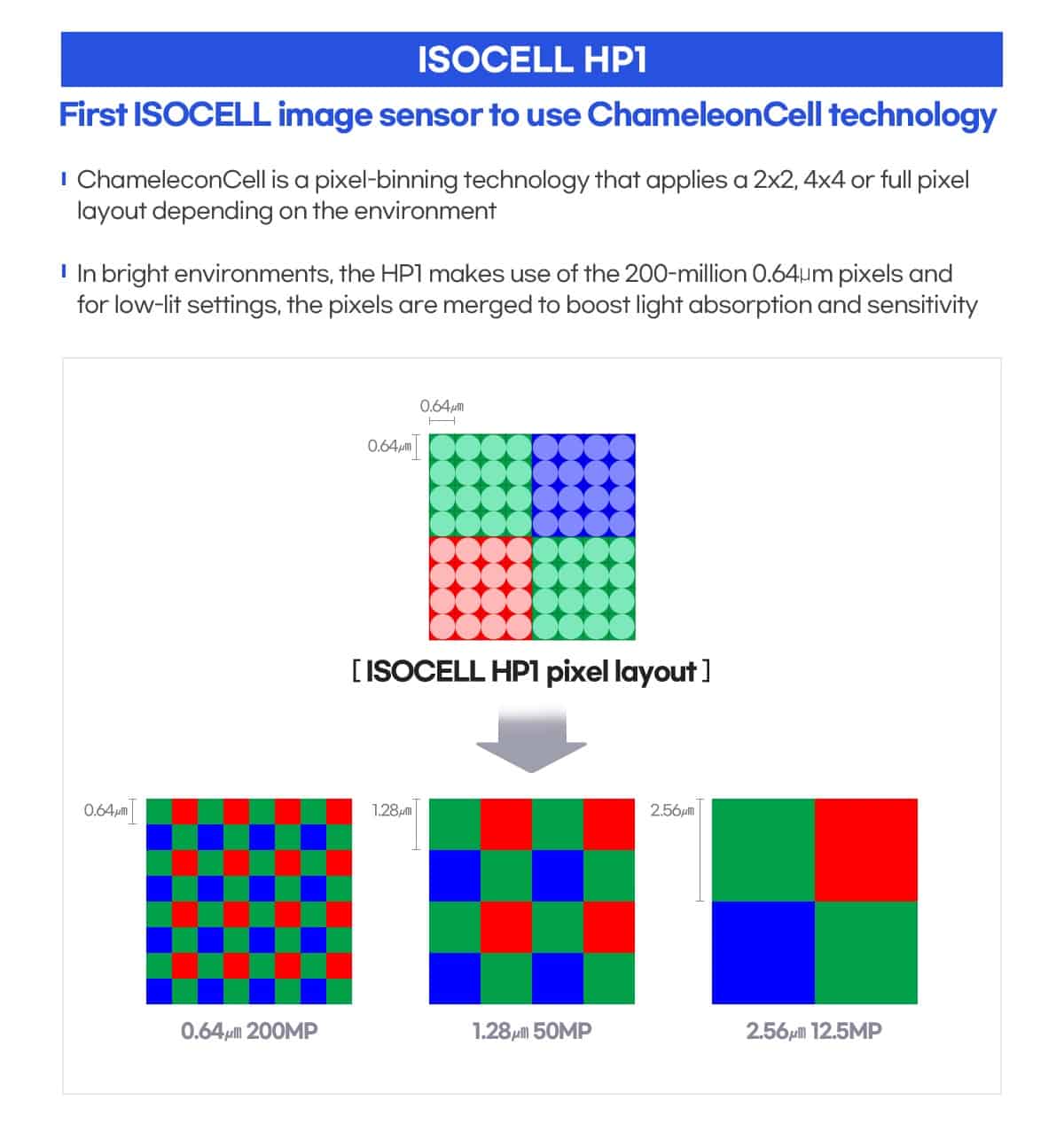 The new Samsung ISOCELL GN5 is a slim 50-megapixel camera sensor with a 1/1.57-inch footprint. It features 1.0μm-sized pixels and uses the Dual Pixel Pro autofocus technology for quick, all-directional autofocusing. Samsung says it has placed two photodiodes within each pixel of the sensor for instantaneous autofocusing, enabling “sharper images in either bright or low-lit environments.”

Samsung says both new ISOCELL cameras are now available to OEMs for sampling. So we could see them coming inside devices later this year or in early 2022. While the 50-megapixel ISOCELL GN5 could largely go unnoticed, we will surely hear about the 200-megapixel ISOCELL HP1 once it starts shipping in devices. After all, it would be a major USP for any smartphone featuring this sensor.

Rumors are that Xiaomi will use Samsung’s new 200-megapixel camera first in its next-gen flagships, the Mi 12 series. The Chinese company also debuted the world’s first 108-megapixel smartphone camera from Samsung back in 2019. So that is quite possible. We keep you updated as soon as we have more information. 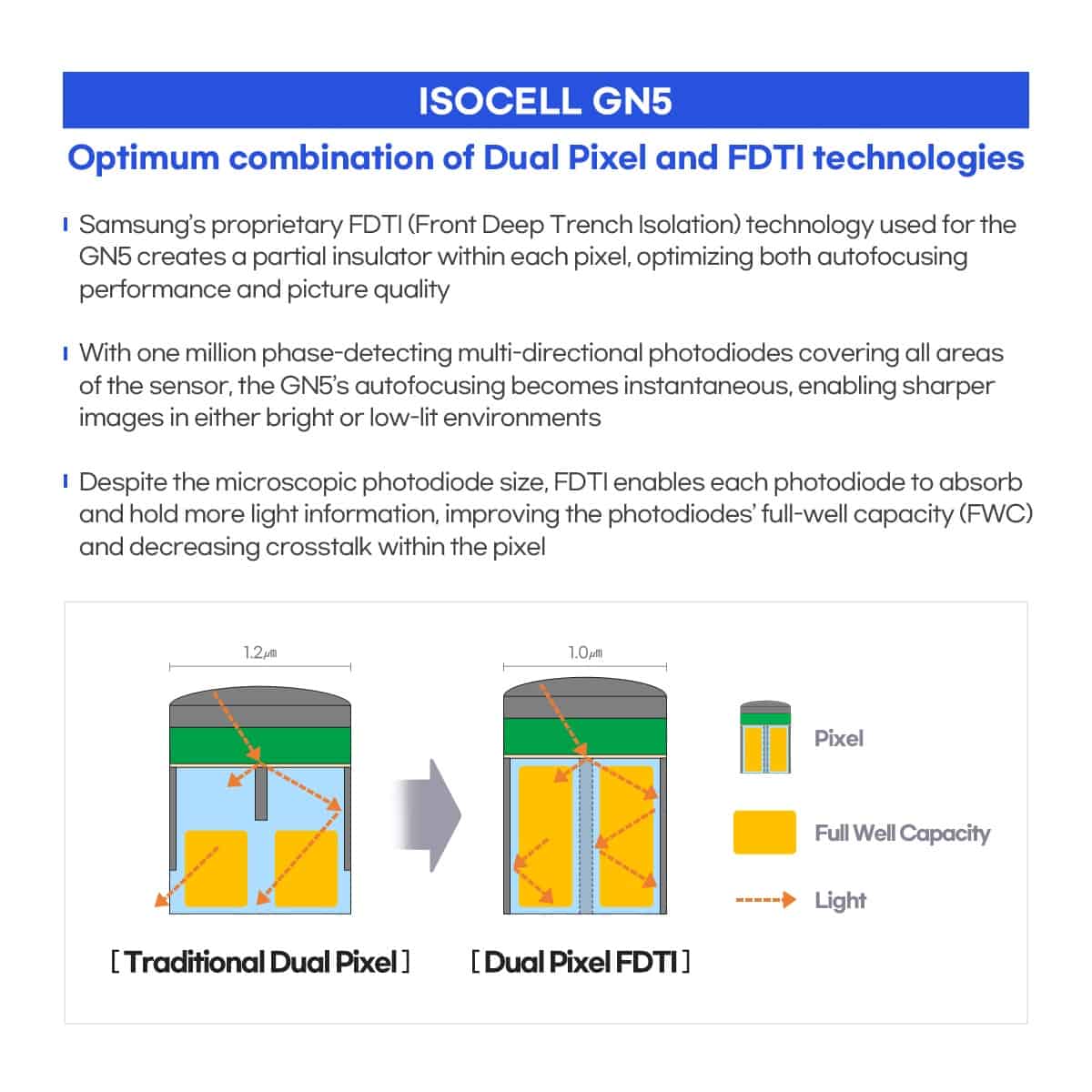