The Google Pixel Fold is probably coming in the near future, as more proof just surfaced. Truth be said, this information indirectly hints at a Pixel Fold launch, or whatever Google ends up calling its first foldable smartphone.

Android 12 is likely coming on October 4, but we’ve recently found out that Google also plans to release Android 12.1. That point update will likely arrive later this year, and it will include some improvements to the foldable phone experience.

You may remember the hidden “taskbar” feature from Android 12 Developer Preview 2. Since then, no major improvements were made for that feature, nor was the feature brought front and center.

Well, according to XDA Developers, there’s a good reason for it. Google is developing this feature for large screen devices like tablets, which offer more screen real estate. The source reports that this feature is in preparation for Android 12.1.

Google’s internal AOSP codebase contains a number of improvements to the taskbar feature. The tutorial is in preparation, and it explains you will be able to launch two apps in split-screen view by dragging an app icon to one side of the display. 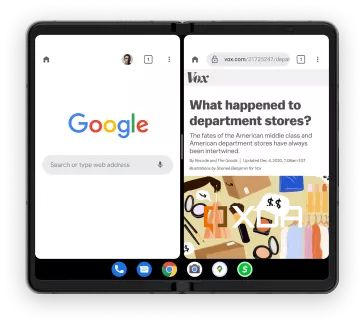 You’ll also be able to add your own apps to that taskbar, and hide it whenever you want. You’ll simply have to touch and hold it, and you’ll be able to hide it, until you need it again.

This is just a small taste of what Android 12.1 may bring. This update will be focused on foldable devices, it seems, and we’ll likely get more information moving forward.

Google’s first foldable smartphone is still tipped to launch by the end of 2021, though it remains to be seen if that will happen. Google may mention it during the Pixel 6 launch, but it likely won’t launch during that event.