MediaTek last year overthrew Qualcomm as the biggest smartphone chipset vendor in the world. The Taiwanese company has since further extended the lead over its American rival. According to research firm Counterpoint Research, MediaTek captured a 43 percent share of the global smartphone SoC market in Q2 2021. That’s the company’s “highest ever” share to date, and a massive growth from a 26 percent share it captured a year earlier. Qualcomm, on the other hand, saw its market share drop from 28 percent to 24 percent during the same period.

Overall, smartphone SoC shipment grew 31 percent year-on-year (YoY) this past quarter. The growth is driven by the growing popularity of 5G smartphones as well as a lower than usual shipment last year due to the global health crisis. 5G smartphone shipments grew almost four times from Q2 2020, the report says.

Chinese chipmaker UNISOC was another big gainer in the second quarter of this year. Its market share jumped from 4 percent in Q2 2020 to 98 percent this past quarter. The company leapfrogged Samsung and Huawei’s HiSilicon to enter the top five. HiSilicon has been unable to manufacture new Kirin chipsets due to the US ban. The result is that its market share dropped from 16 percent in Q2 2020 to a mere 3 percent in Q2 2021. Samsung’s share also dropped from 12 percent to 7 percent during the same period. Apple, meanwhile, didn’t see any changes in SoC shipments thanks to a consistent demand for its iPhones. 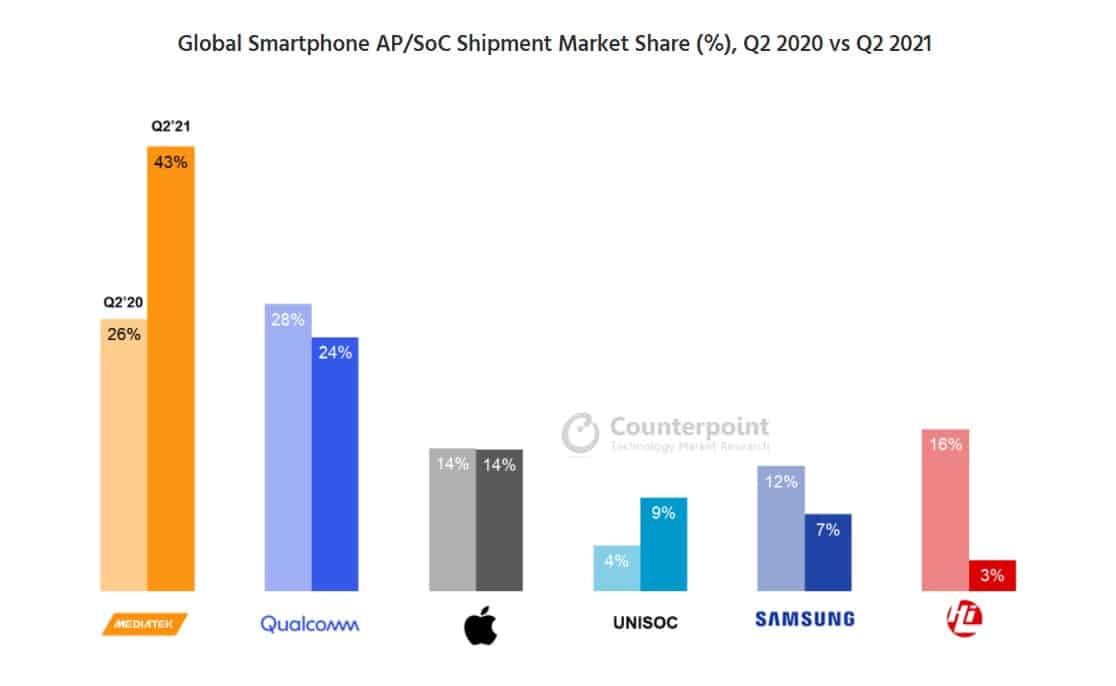 MediaTek is strengthening its 5G portfolio

Per the new report, MediaTek was comparatively less affected by the ongoing chip semiconductor chip shortage issue. The company also strengthened its low-cost 5G portfolio and managed to gain market share in that segment, as well as in the LTE segment. This helped it grow its 5G baseband modem shipment as well, capturing a 30 percent share in Q2 2021. The Taiwanese giant accounted for about 11 percent of global 5G baseband shipments a year earlier.

Qualcomm still leads this market though. The American company supplied 5G modems to Apple for the iPhone 12 series, which helped it to massive growth. It dominated the baseband market with a 55 percent share during the second quarter of this year. That’s almost double the 29 percent share it captured in Q2 2020.

Samsung is a big loser in this area as well. Its share dropped from 18 percent to 10 percent this past quarter. Counterpoint says the Korean company is “rejigging” its ODM (original design manufacturing) smartphone portfolio strategy. It is now increasingly using MediaTek and Qualcomm chipsets instead of its in-house Exynos SoCs.

Going forward, the battle between Qualcomm and MediaTek at the top could get fiercer. Both companies are preparing to launch their respective greatest smartphone SoC to date in the coming months. Early reports make it extremely difficult to differentiate the two. Time will tell who comes out on top. 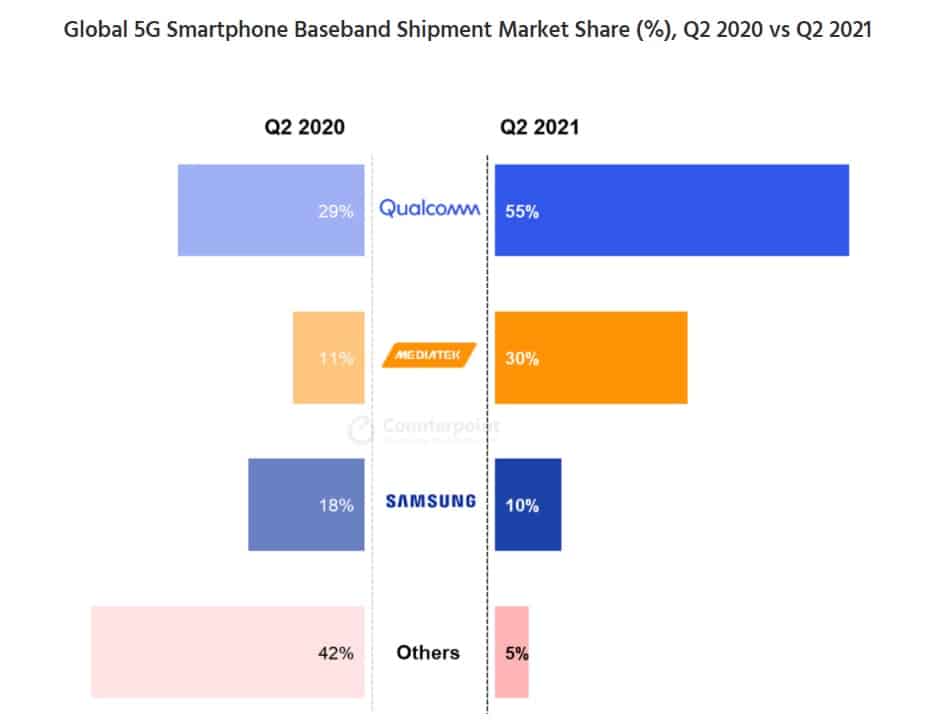