Skip to content
Advertisement
Trusted By Millions
Independent, Expert Android News You Can Trust, Since 2010
Publishing More Android Than Anyone Else
7
Today
120
This Week
43
This Month
5301
This Year
115308
All Time
Advertisement

While you can search almost anything on Google, the Google app SafeSearch tool helps you prevent from stumbling into the explicit side of things on the web.

It comes in handy, especially if you share your computer with your family members and children. Google SafeSearch basically filters out explicit content from Google search including images and videos sections as well.

So, it basically stops you from getting exposed to sexually explicit content on the web. As of now, the SafeSearch setting can be found beneath multiple layers of the Google app’s settings menu.

Finally, the company is making some changes to this. With the new Google app beta update, access to the SafeSearch setting is getting a lot easier than before.

Previously, you could find the Google app SafeSearch feature inside the ‘General’ settings menu. Fast forward to now, the company is giving the SafeSearch tool a dedicated space, right in the main listings of settings.

A new ‘Hide Explicit Results’ entry is showing up for multiple users in the latest version of the Google app. Notably, this section gives you all information about how search filters work, with a toggle switch to turn the feature ON or OFF.

As reported by 9to5Google, this new dedicated SafeSearch menu is coming to users running the Google app beta version 12.34. Apparently, this is a server-side update, and you don’t have to do anything from your side to get it.

SafeSearch is a single toggle within the app. If you want to protect the younger members of your family or friends from getting exposed to the explicit content across the web, then you can turn this feature ON, now more conveniently than ever.

In fact, the current description of the feature makes it more clear about what changes will take place when you turn on the SafeSearch feature on your Google app. Here is what the brief description says,

“When SafeSearch is on, it helps hide explicit content on Search.”

“When SafeSearch is off, you’ll see the most relevant results for your search, which may include explicit content like images of violence.”

It is a nice touch from Google to introduce an important feature straight into the main menu listing. If the new Google app SafeSearch menu hasn’t appeared for you then, it may take time. Also, for those who are running the stable version of the app, the feature is expected to roll out soon. 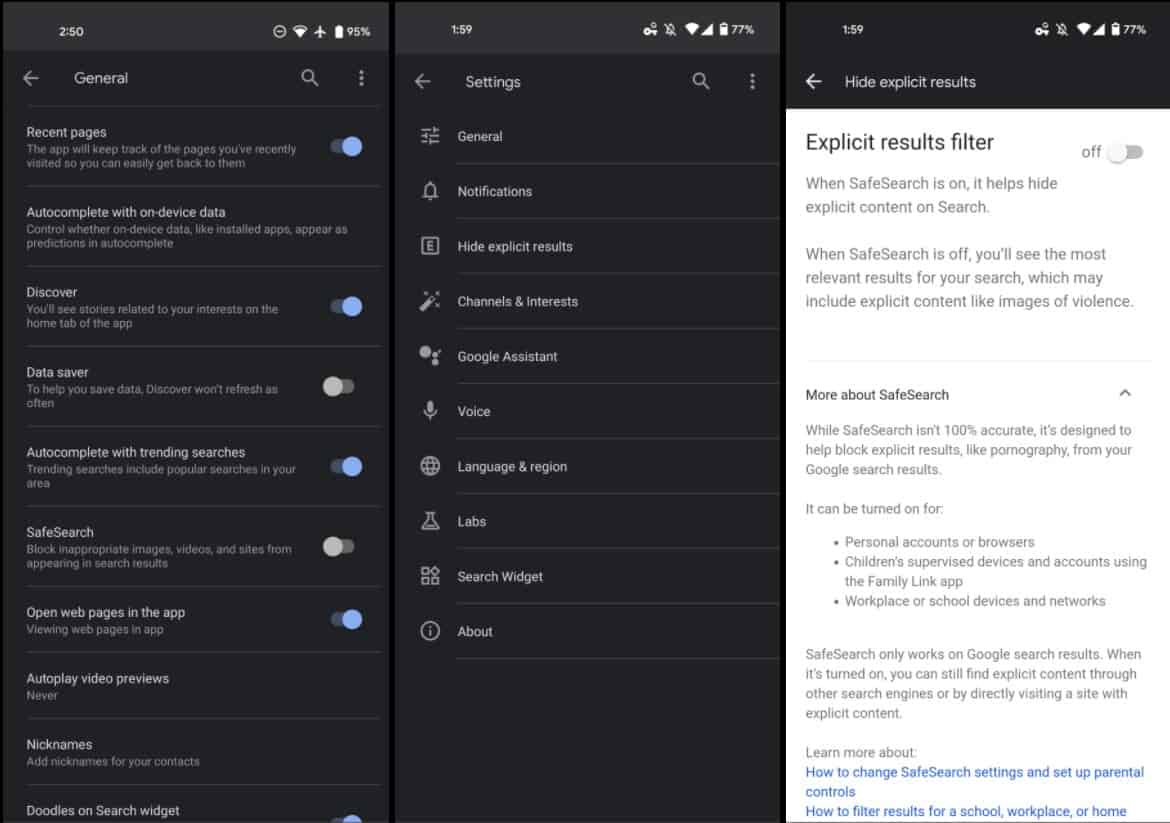