Google is going out of its way this year to make its Pixel smartphones more appealing to potential customers. The upcoming Pixel 6 and 6 Pro have several ‘firsts’ for the Pixel lineup, but perhaps nothing more than a custom processor. The company teamed up with Samsung to develop the Tensor chip that will power both models. It appears there’s something unusual about this chipset as well. A recent Geekbench entry has revealed that the Tensor chip will feature two Cortex-X1 Super Cores.

All recent flagship smartphone SoC, including the Qualcomm Snapdragon 888/888+ and the Samsung Exynos 2100, feature a single Super Core for high-performance tasks. But Google seemingly wants to take things to a new level by including two of these Cortex-X1 Super Cores in the Tensor chip, operating at a maximum frequency of 2.8Ghz.

An extra high-performance core means Google had to sacrifice one mid-tier CPU core. While competing solutions feature three mid-tier cores, the Google Tensor has only two such cores clocked at 2.25GHz. The four power-efficient cores operate at up to 1.8Gz.

Google has been vocal about making the Tensor chip more efficient in artificial intelligence (AI) and machine learning (ML) rather than focusing on computing power. But the inclusion of two Cortex-X1 Super Cores means this chipset will be no slouch at taxing tasks.

At first, this Geekbench entry looked fake. However, multiple industry insiders have suggested it to be genuine. Noted leakers Max Weinbach and Digital Chat Station have gone on to confirm the Mali-G78 GPU as well.

The Geekbench listing for the Pixel 6 Pro confirms that the device will run Android 12 out of the box. It will get 12GB of RAM, though Google may also offer the phone in other memory configurations. The handset scored 414 and 2,074 in single-core and multi-core tests respectively. These numbers aren’t very impressive but that could be because of the lack of optimization. Google could optimize the processor to perform better before it launches the Pixel 6 series.

Unfortunately, Google is still using ARM’s v8 cores when its rivals are moving to v9 cores for their next-gen offerings. ARM claims the Cortex-X2 v9 Super Core to bring a 16-percent performance boost over Cortex-X1. Likewise, the Cortex-A710 and Cortex-A510 CPU cores, both based on the v9 architecture, are also more power-efficient than their respective predecessors. 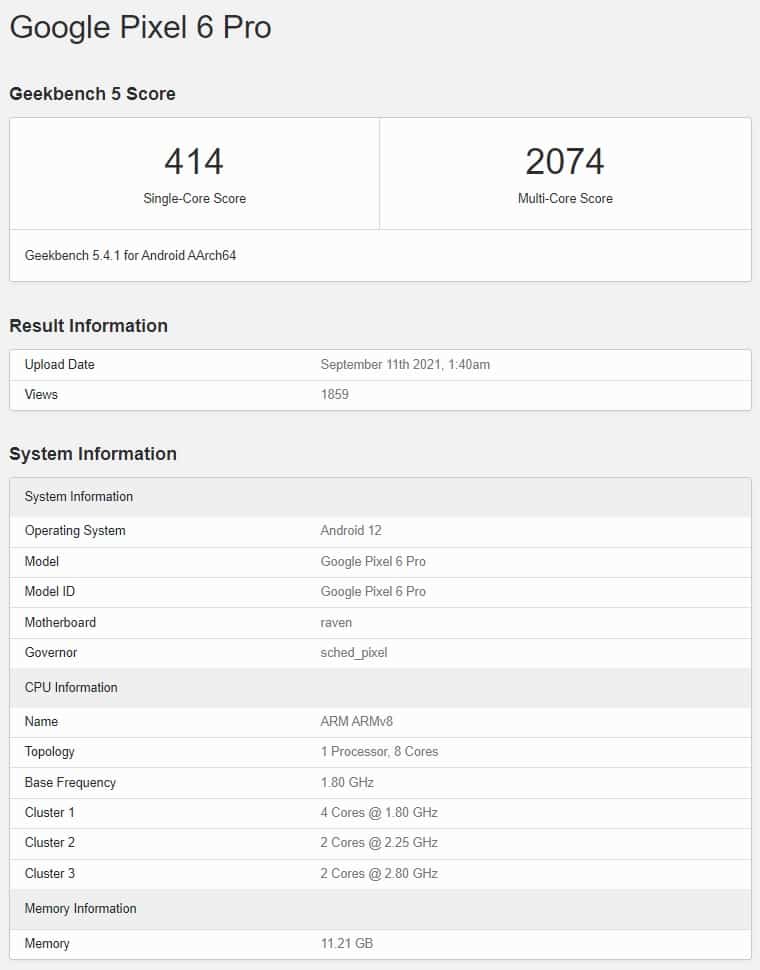