It was reported recently that Android 12.1 is coming this year, and that it may focus on foldables. That information came from XDA Developers, and that very same source is now bringing us the very first look at Android 12.1.

This will be the first “point” update from Google since Android 8.1 Oreo came around. That was way back in 2017, by the way. XDA Developers are bringing us a look at some features that are coming with this update.

We’ll tackle these new features one at a time, as the source mentioned quite a few of them.

Android 12.1 will bring a dual pane notifications panel, Settings, and lockscreen, to make Android look good on foldables. This is not the first time we’re seeing this, as it did pop up in earlier builds of Android 12. 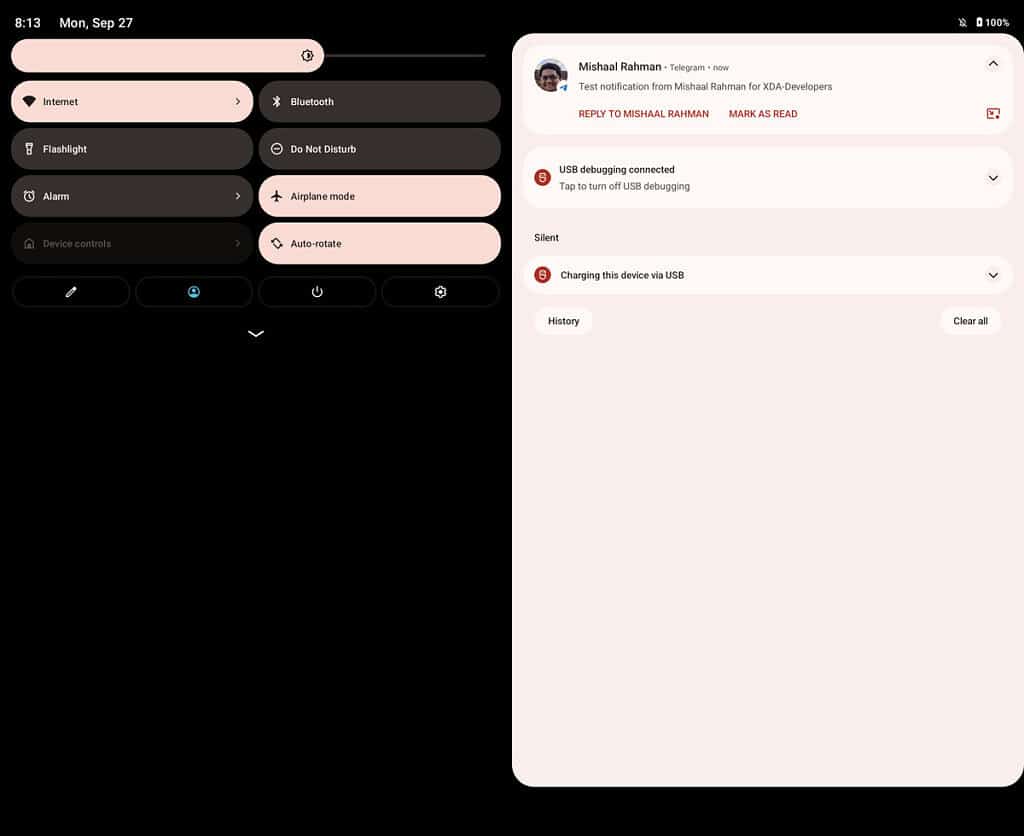 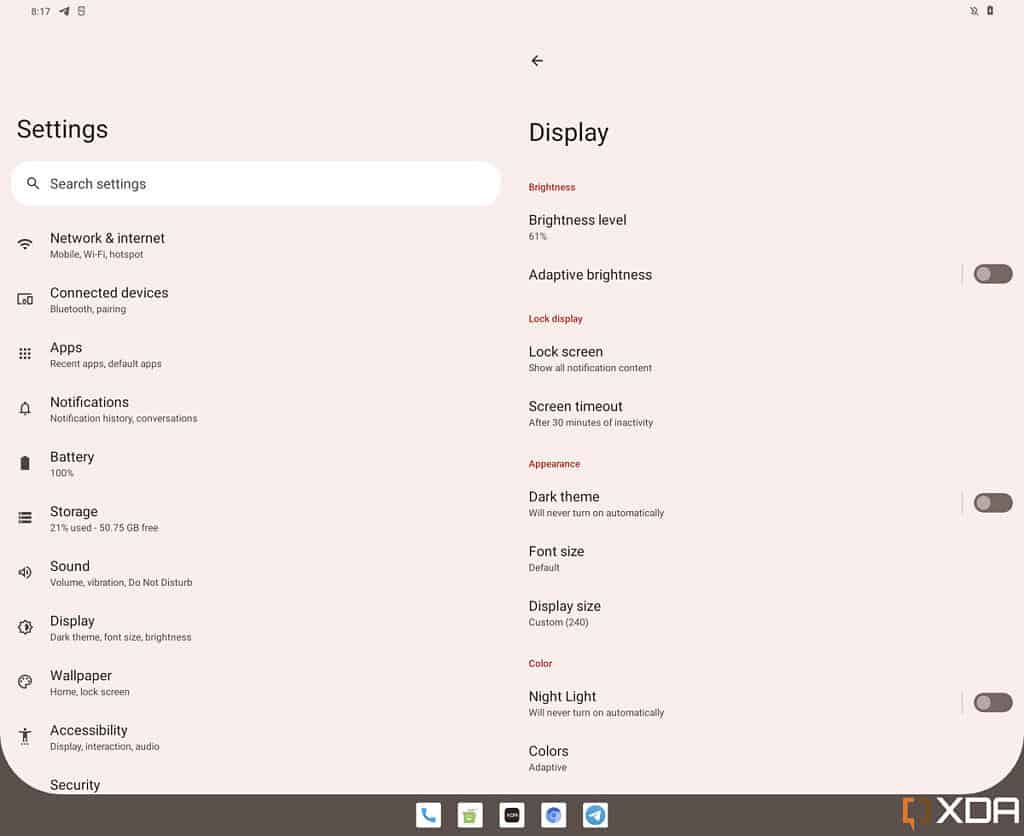 Even the lockscreen will be split in two on such displays. The clock and the date info will be on the left, while the notifications will be placed on the right. This doesn’t look right, though, so it’s possible this UI will see some changes before Android 12.1 arrives. 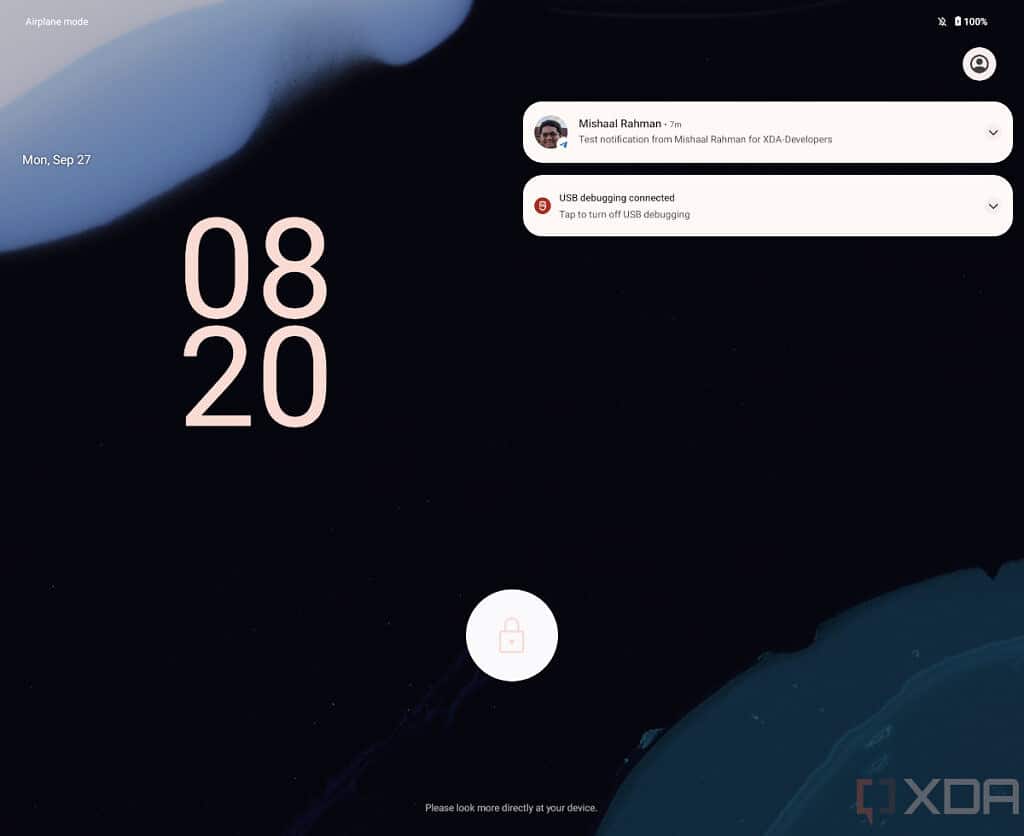 The taskbar will also see some changes. It will be integrated with Android’s existing multitasking and split-screen features. You’ll be able to use the taskbar to quickly switch between apps, drag and drop an app to launch it in split-screen mode, and also touch and hold the taskbar to hide it from view.

At the moment, up to 5 apps can be added to the dock/taskbar, though it’s possible this will see some changes for the final release.

Android 12.1 will also bring a tweaked UI for Android’s split-screen mode and recent apps… for foldables. The split screen’s divider line will be more prominent. It looks like this is still a work in progress, as it looks a bit odd, but we’ll see. 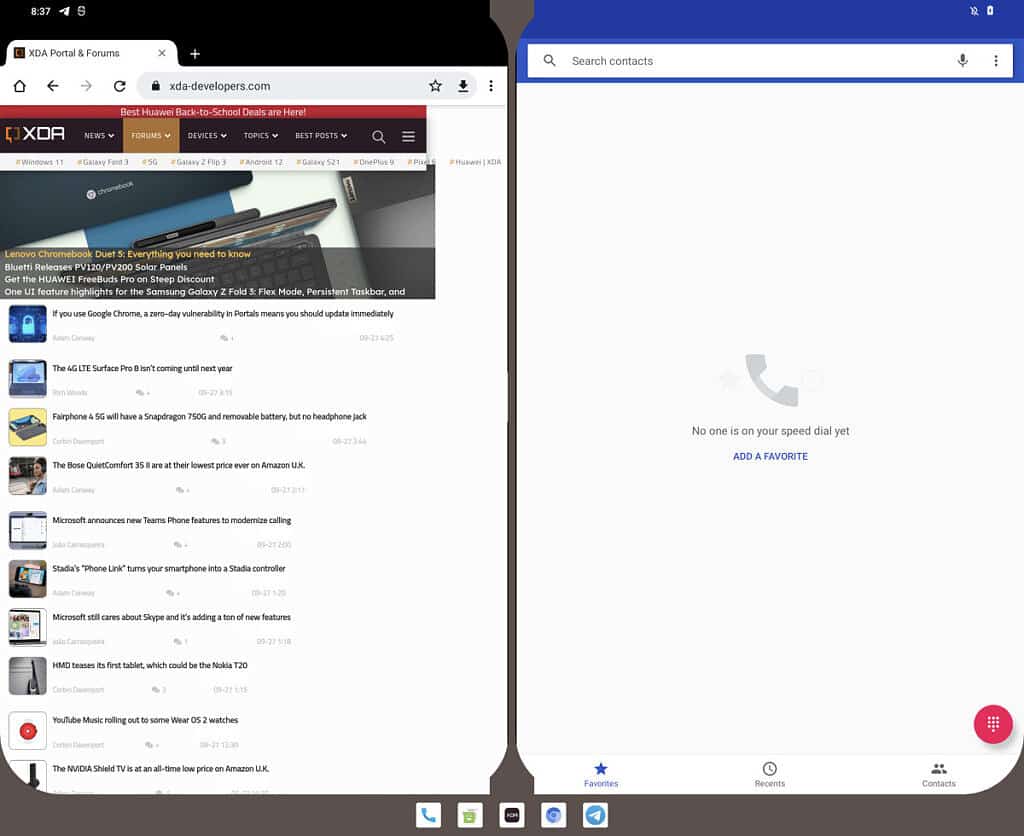 App Pairs should also come to shine. It will enable you to double tap the split screen divider to swap the position of each app. Some additional functionality will be included as well.

Now, the recent apps overview screen will also see some changes. The entire layout will be a bit different. The cards will not be uniform in regards to size, the most recent one will be larger than the rest. You’ll also notice the newly-added “split” button below, which can launch split-screen mode. 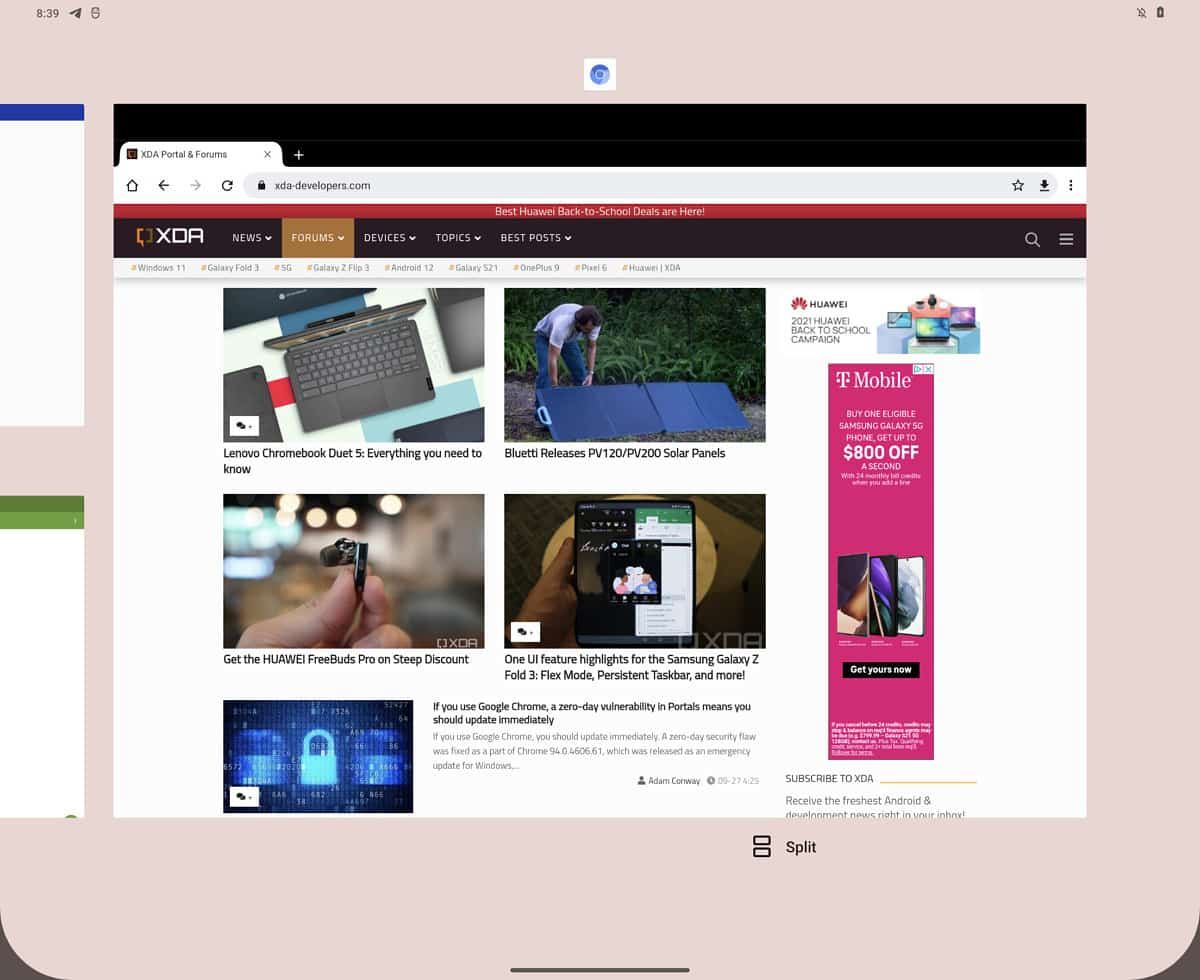 A new feature is also coming, and it’s called “notification to window”. This feature will allow you to launch an app activity in a split-screen window by long-pressing a notification and then dragging and dropping it to the screen half you choose. Do note that this is not enabled by default, at the moment, so who knows if it will be when Android 12.1 launches.

OEMs will have full access to the code behind Google’s theming system in Android 12.1. Google is also allegedly planning to expand dynamic coloring to Android’s boot animation in Android 12.1.

Android 12.1 will make it possible to set the press & hold duration of the power button. This feature will be added in form of a “press & hold duration” slider, as you can see in the image below. This option will be accessible via “Settings -> Gesture -> Press and hold power button”. You’ll be able to choose between 250ms, 350ms, 500ms, 650ms, and 750ms. 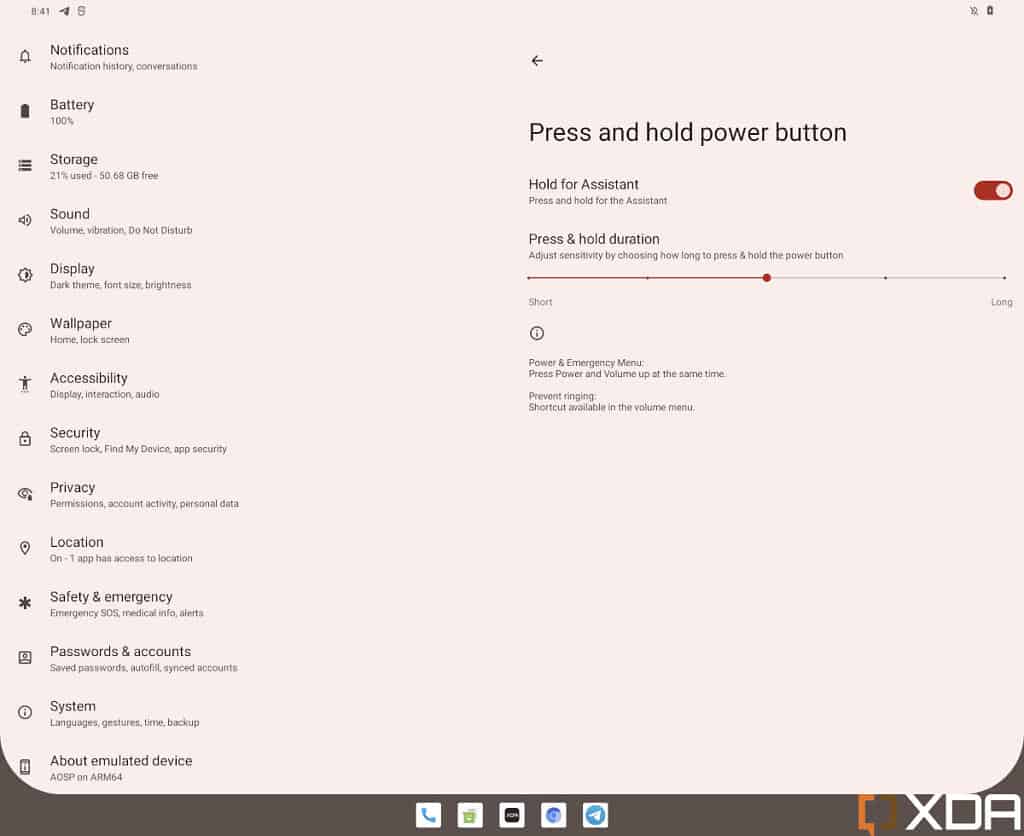 Android 12.1 will also bring a new wallpaper to the table. It will replace the “Pink Sky” image which has been included in AOSP releases since Android 7.0 Nougat. You can check out the wallpaper below. You can also download it by clicking here. 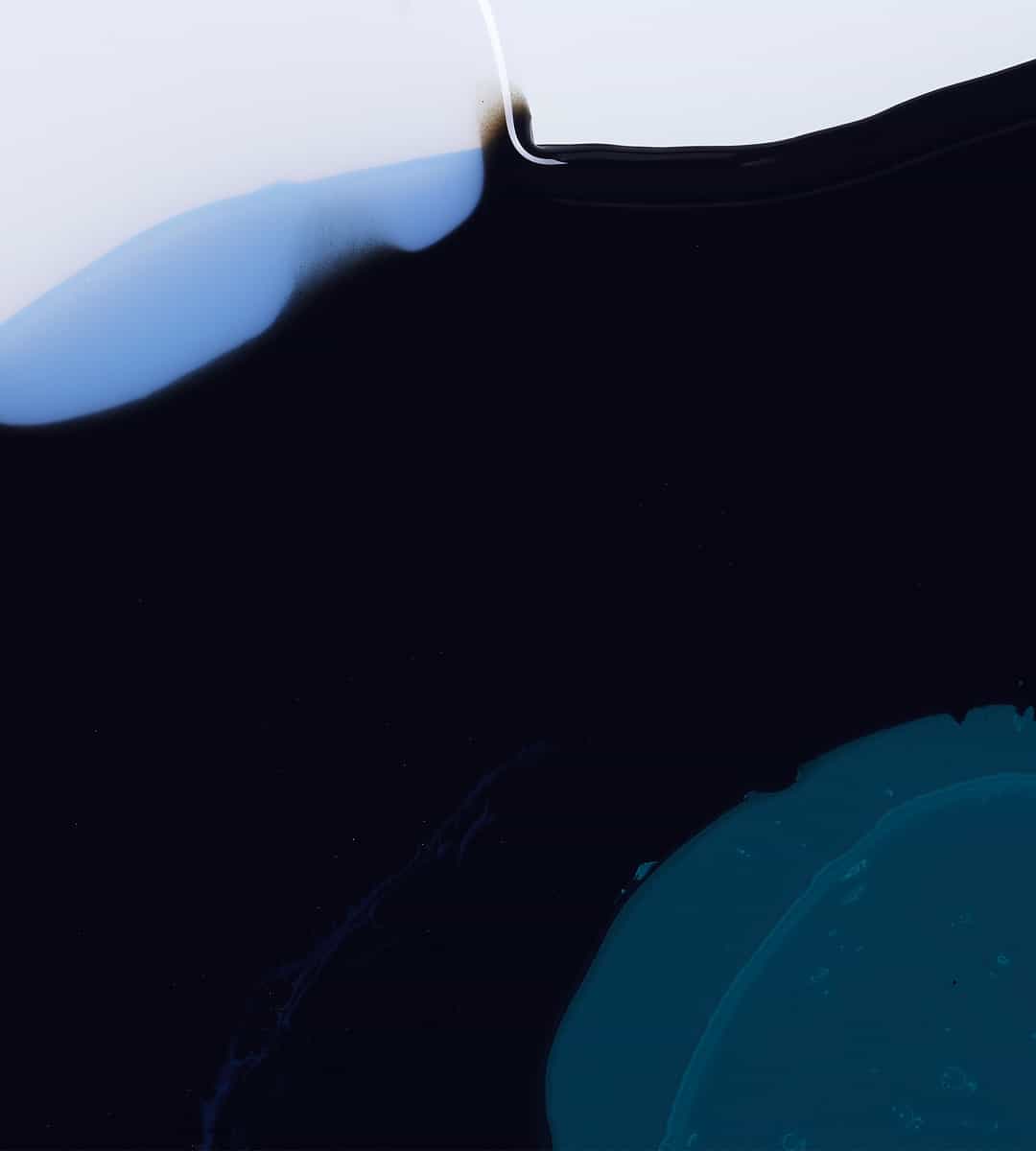