The launch of Battlefield 2042 may have been delayed until November 19, but you’ll get your chance to play it well before then with the beta. In fact, the beta is coming up a lot sooner than you might think.

Earlier this morning EA announced the official dates for the open beta on the Battlefield Twitter account. It’ll be limited to one mode for the duration of the beta. So as always you won’t get the full scope of the game until it launches.

Since this is a beta players should also expect issues or bugs. Players will no doubt be requested to share feedback of their experience after the beta ends. Which could and should include any reporting of bugs that popped up. EA is also likely using this to stress test the game servers. As is typically the purpose of most betas.

The Battlefield 2042 beta stats on October 6

In just over a week you’ll be able to load up the game and try it out for the first time. That said, this start date will be limited to those with early access. Which requires a pre-order of the game or an EA Play membership. Once the early access starts on October 6, it’ll carry through October 7 before opening up to everyone else.

Those who don’t have early access won’t be left out in the cold. So don’t worry if you’re holding out to buy the game until after it launches. EA will be opening up the beta to all players on October 8 and carrying through October 9.

You can also pre-load the beta starting October 5. The open beta will be available for players on PS5, PS4, Xbox Series X|S, Xbox One, and PC. There’s also a list of minimum and recommended requirements for the PC beta, which you can view below. 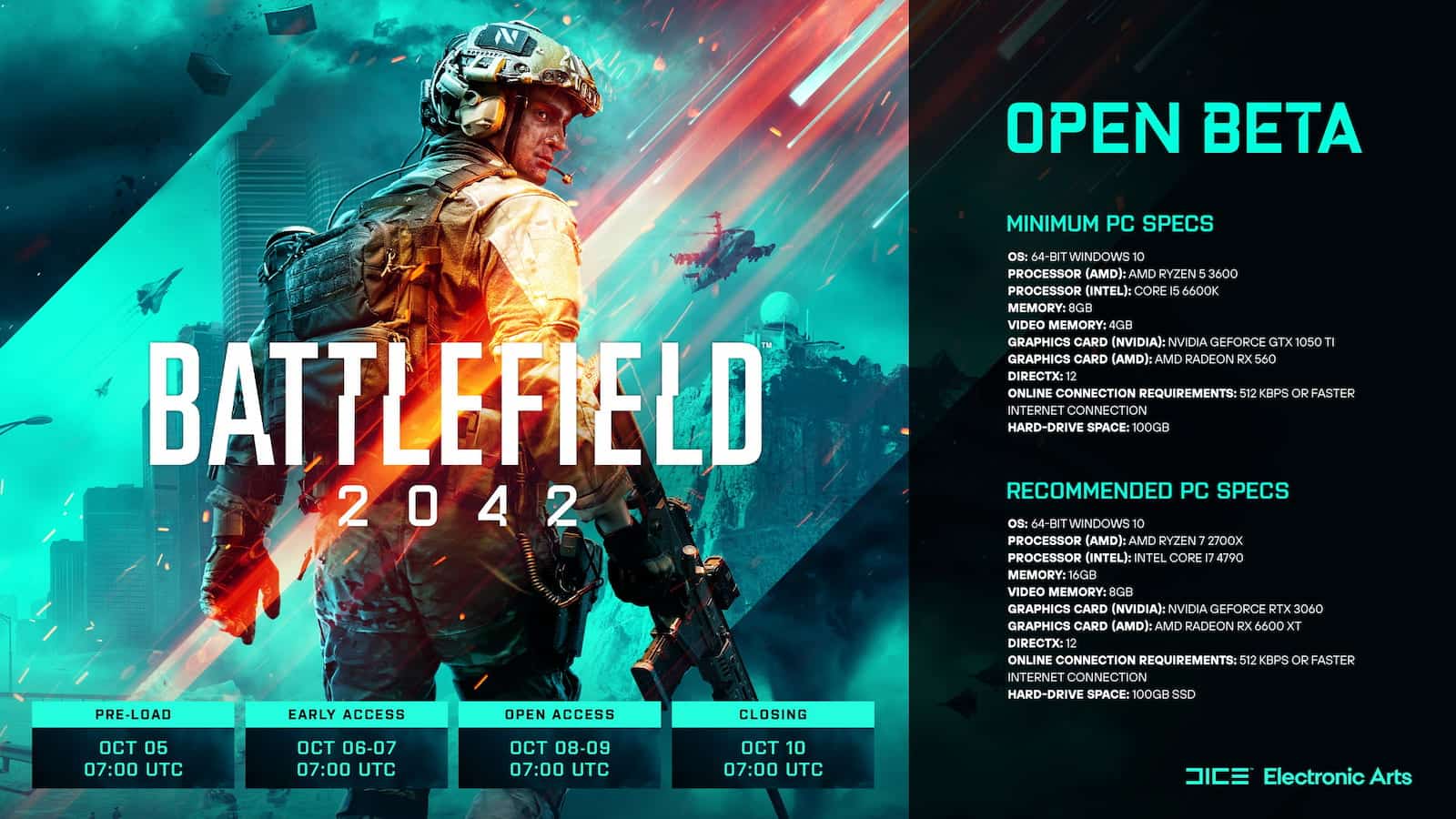 The beta features one mode and one map

Battlefield 2042 will feature a collection of modes and varied ways to play. The beta however will not offer all of them. At least not in this particular round of testing. For the beta coming up next week, players will be able to dive into All Out Warfare, which features up to 128 players, in the Conquest mode.

The map will be Orbital, and you’ll be able to choose from four of the game’s many specialists – Mackay, Falck, Boris, and Casper. You can learn more about the specialists and see an image of the Orbital map in our Battlefield 2042 guide linked at the top of this post.

If you want to learn more about the beta you can find more information here.