Do note that the August 10 event will be hosted in China. It will be a China launch of both devices, though chances are that both of them will roll out to other markets as well.

The Xiaomi Mi Pad 5 arrival confirmed for August 10, along with stylus support

Xiaomi confirmed the Mi Pad 5 arrival via the image provided below. You can clearly see a stylus touching the display of the tablet. It seems like the Mi Pad 5 will have chamfered edges, like some leaks showed us. 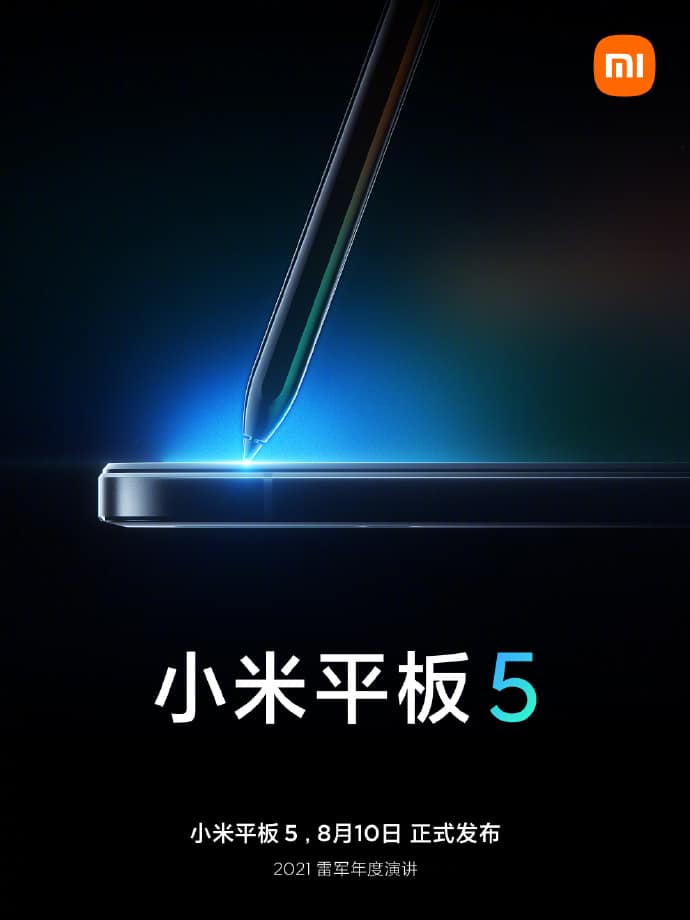 Its frame will be made out of metal, which is obvious based on this image. The back side will likely be made out of glass, though that’s just a guess on our part, of course. That’s what makes the most sense.

It’s also worth noting that Xiaomi actually certified the ‘Xiaomi Smart Pen’ with the M2107K81PC model number this week. That stylus does support Bluetooth 5.0 LE, in case you were wondering, and it has a button on it.

This tablet will allegedly arrive in three different models

That being said, the Xiaomi Mi Pad 5 is rumored to arrive in three different variants. The base model is said to ship with a QHD+ 120Hz LCD display, the Snapdragon 860 SoC, 33W fast charging, and a 12-megapixel camera.

The middle-of-the-road version will include the Snapdragon 870 SoC, a 10.95-inch QHD+ 120Hz LCD display, a 12-megapixel camera, an 8,720mAh battery, and a side-facing fingerprint scanner. Both of those variants are supposed to be WiFi only offerings.

The last, and most powerful model will include the Snapdragon 870 SoC as well. 5G will be supported, while the device will include a 10.95-inch QHD+ LCD display. A 48-megapixel camera was mentioned in rumors, and the same goes for an 8,720mAh battery, and 67W fast charging.