WhatsApp will make its new and controversial privacy policy optional for users. The company hasn’t officially announced this yet but according to a WABetainfo report, it may soon.

WhatsApp did delay the enforcement of the changes by a few months but remained adamant that it will not pull back the new policy. The company was essentially buying time to try and grow confidence inside users that the new policy would not affect their privacy. It said users will lose features if they don’t accept them even after repeated and persistent reminders. Among other things, WhatsApp would limit users from messaging, the very core feature of the app, essentially rendering it useless.

But after eight months of backlash from users all over the world, it is now reportedly making the updated privacy policy optional. Per a screenshot shared by WABetainfo, users would require to accept the new terms only when messaging certain Business accounts. Business accounts that use cloud providers, to be precise. Messaging your friends and family on WhatsApp will not require you to accept the updated policy.

WhatsApp will notify you if a Business account uses cloud providers

According to the report, WhatsApp will notify you if a Business account you’re trying to message uses cloud providers. You will get a pop-up with options to either reject or review and accept the new Terms of Service and start messaging. You cannot message that account unless you have accepted the updated policy.

“WhatsApp recently updated its terms and privacy policy. This business account uses a secure service from the Facebook company to manage chats. To chat with this business, review and accept the WhatsApp update,” the pop-up reads. It features two buttons: Not Now and Review.

This change is already rolling out to WhatsApp users in the beta channel for both Android and iOS platforms. It could soon be available to all WhatsApp users globally. We expect an official announcement from the company in the coming days. 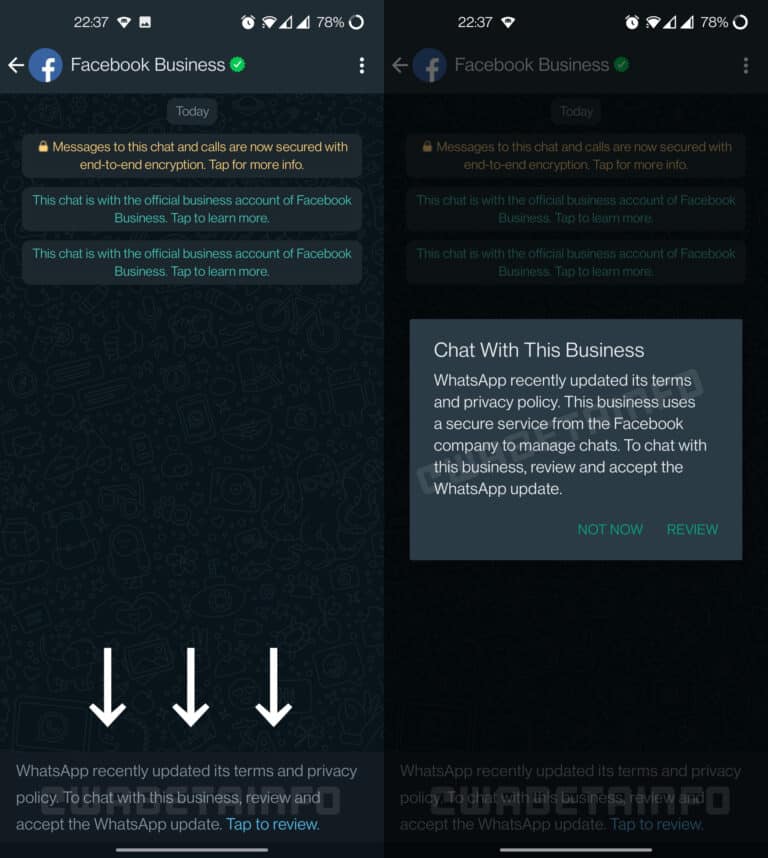