TikTok has managed to become the world’s most downloaded app, according to Nikkei. TikTok managed to trump Facebook in the process, an app that held the crown until now.

TikTok managed to grow at an incredible rate over the years, which brought it where it is now. It has been the most popular app for a long, long time at this point. The pandemic arguably even helped TikTok grow. People spent a lot of time at home, and TikTok was the perfect app to help them kill some time.

This report has been compiled by Nikkei, and is based on data from App Annie. Do note that the information is for 2020, and it compares the state of each app with 2019.

As you can see in the list provided below this paragraph, TikTok jumped from fourth-placed, to first place. On its way, it jumped over not only Facebook, but also WhatsApp and Facebook Messenger. Those are all Facebook-owned apps, though. 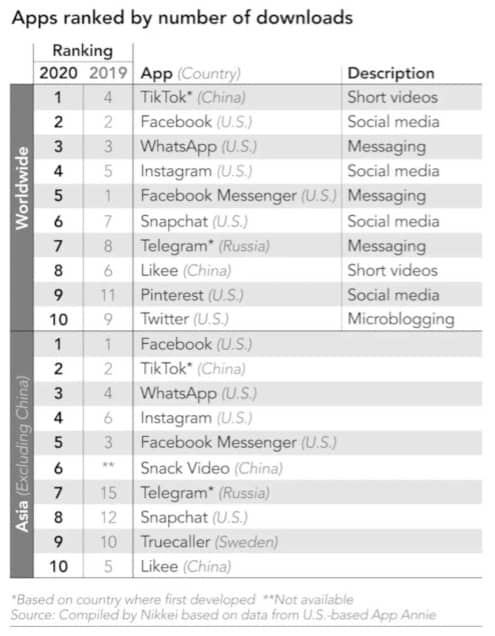 Snapchat improved its standing, and is now sixth-placed, and it’s followed by Telegram. Likee is eight, and is followed by Pinterest and Twitter which close out the top 10 list.

In the top 10 most downloaded apps, there are 7 apps from the US, two from China, and one from Russia. Most of the apps listed here are social media apps, and are followed by messaging apps. What’s interesting is that the top app is a short videos app, the only one in that category.

TikTok is still growing, and it’s likely it will keep this place by the end of 2021 as well. That app managed to become a phenomenon of sorts. Facebook will, of course, try to change things around, as it has four apps trailing behind TikTok at the moment.