One of the popular messaging platforms, Telegram is rolling out a new update for its Android users. However, along with the new update, Telegram has also taken a move that will disappoint Android users at the same time.

Notably, as per a report by 9to5Google, continuing with its monthly update tradition, Telegram has released the version 8.0 update for Android.

The update packs in a few new features. According to the official blog, Telegram 8.0 update unlocks the viewer’s limit for a live stream. This means now you can have live streams with an unlimited audience.

Furthermore, users can have an unlimited audience for their live streams on a channel or a video chat in a group. You can simply begin live streaming by tapping the Video Chat option in Groups or Live Stream option in a channel, where you are the admin.

Now you can also remove captions or hide the sender names during message forwarding. Telegram also is adding an easy way to hop onto the next unread channel. This negates the need to go back to your chat list and look for the unread channels manually.

The Telegram WearOS app sadly vanished from the Play Store

Trending stickers will be shown on top of the Recently Used stickers in your sticker panel. Moreover, when you scroll through a sticker pack, the thumbnails will now expand, giving you better visibility.

Along with all these new features, the update, unfortunately, removes the WearOS app from the Google Play Store. As noted by the source, the app was visible on the Play Store as recently as Sunday evening.

Fast forward to now, soon after the release of the Telegram 8.0 update, it seems the company has quietly pulled off its WearOS app. The app won’t show up on the Play Store when you search for ‘Telegram’.

So, you cannot re-download the app or expect future updates coming your way on your smartwatch. Telegram officials weren’t available to provide an immediate response on this move. We expect them to give some clarity on the removal of the WearOS app, soon.

The Telegram 8.0 update is live on the Google Play Store. If you haven’t received the update notification, you can head over to the Play Store and update the Telegram app on your smartphone. 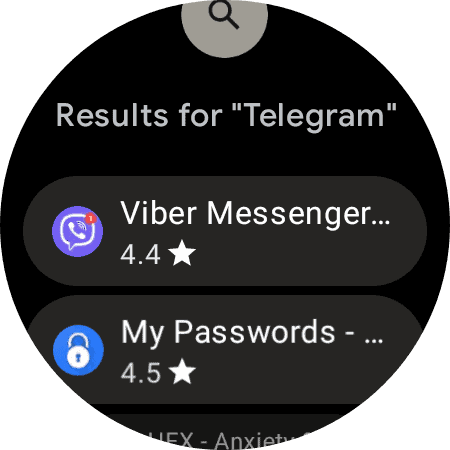