Samsung will manufacture over 7 million smartphones in 2021. This information comes from Display Supply Chain Consultants (DSCC), as Ross Young shared the information on Twitter.

He also shared a rather interesting graph, which shows that Samsung is pulling all the stops in the second part of the year. Samsung’s foldable smartphone production reached record volumes in July and August. 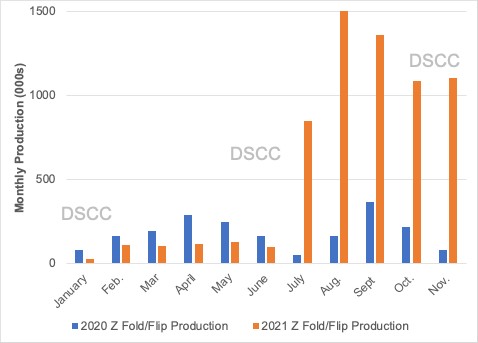 Samsung will manufacture over 7 million foldable smartphones in 2021

The company’s foldable smartphone production should exceed 1 million units a month for 4 straight months, says Ross Young. This will represent an increase of 251-percent in 2021, compared to 2020.

Needless to say, this is quite a considerable growth compared to last year, and all previous years, quite frankly. Based on some past reports, this trend will continue in the coming years. We’ll keep seeing more and more foldable smartphones in the market.

Based on the graph shared above, you’ll notice the difference in Z Fold and Z Flip series production in 2020 and 2021. The growth is easily noticeable here.

It seems like quite a few people are interested in Samsung’s foldables. Pre-order numbers from Korea look more than promising, as they went above and beyond Samsung’s expectations.

Chances are that pre-orders in other countries are also doing well enough. It will be interesting to see how many Z Fold 3 and Z Flip 3 units will Samsung be able to sell by the end of this year.

Samsung is, and will remain the king of the foldables market… at least for the foreseeable future

Samsung is, without a doubt, the king of the foldables market. That likely won’t change anytime soon. A number of other companies did release their foldable offerings, but Samsung’s are still a step ahead.

The same can be said for HONOR, as the company is working on its first foldable smartphone. We’re not sure when will that device launch, but it’s possible we’ll see it before the end of 2021.