The Samsung Galaxy S21 FE could launch fairly soon, according to a page on Samsung France’s official website. On this page, accessed by SamMobile, the company is advertising a free YouTube Premium subscription along with the purchase of Galaxy flagships.

Within the list of phones eligible for the offer is where we see the mention of the Galaxy S21 FE. This revelation also tells us that Galaxy S21 FE buyers will get 4 months of YouTube Premium at no cost (in France).

This comes a few days after Samsung “accidentally” published an image of the Galaxy S21 FE. Meanwhile, older leaks have suggested that the phone will be launched in four colors.

Samsung initially planned to launch the Galaxy S21 FE alongside the Galaxy Z Fold 3 and the Z Flip 3. But the company had to postpone the launch due to the ongoing chip shortage. Despite the long list of leaks, there’s still no word on when the Galaxy S21 FE will be released.

The Galaxy S21 FE is rumored to be packing a 6.5-inch Super AMOLED Infinity-O display coupled with a Full HD+ resolution and a 120 Hz refresh rate. It will also pack 12MP + 12MP + 8MP triple rear cameras and a 32MP selfie camera. Reports suggest that the 12MP primary sensor and the 8MP telephoto sensors will have OIS built-in. 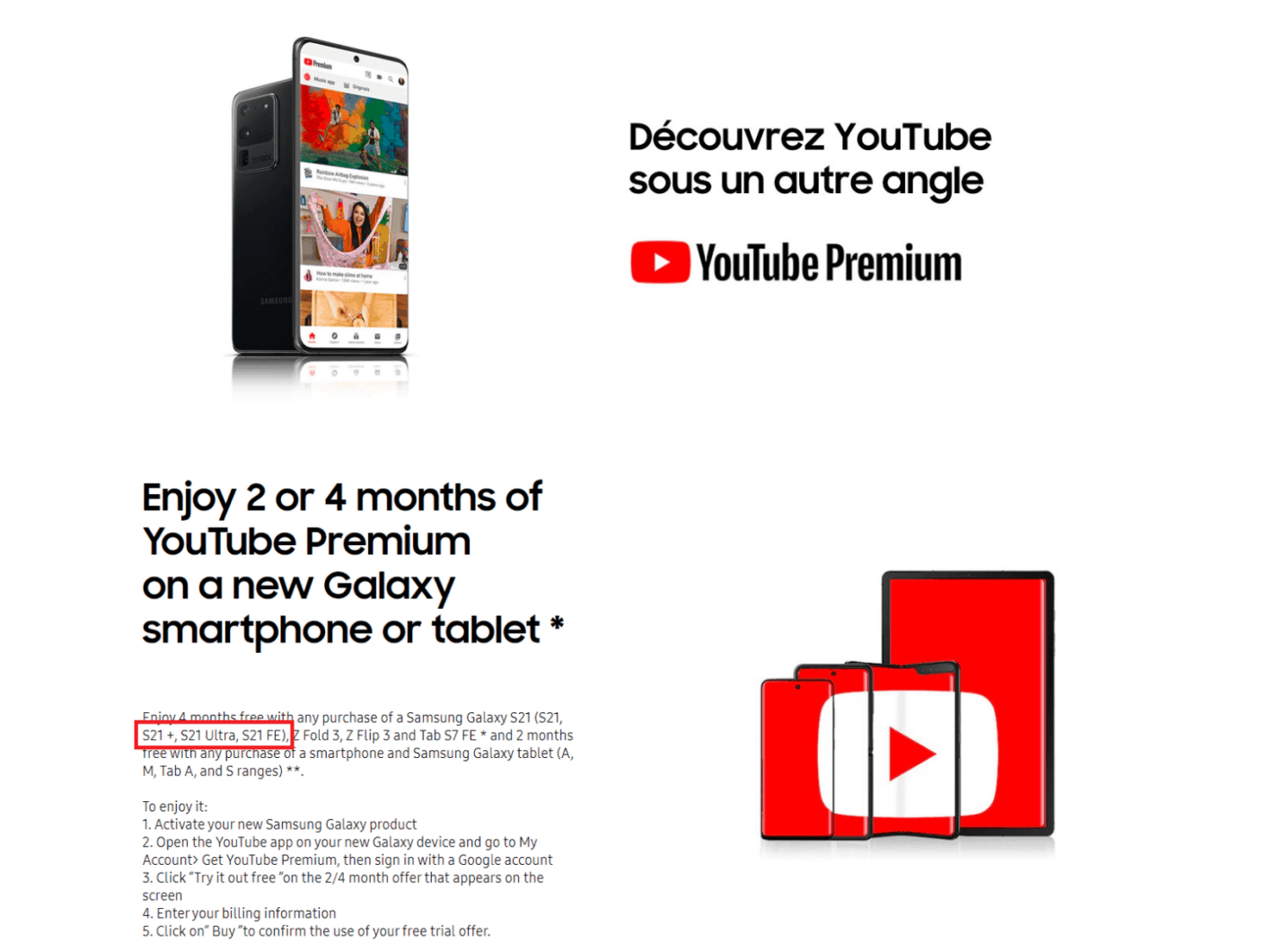 Other features of the Galaxy S21 FE include an in-display fingerprint sensor, 128 and 256GB storage options, and 8GB of RAM. The phone will also sport a 4,500mAh battery with 25W fast charging and Qi wireless charging. Expectedly, the phone will also feature an IP67 rating for water/dust resistance.

In terms of performance, the smartphone should be running on the octa-core Snapdragon 888 chipset. However, it’s likely that the company will also have an Exynos version available.

An exclusive leak told us that the Galaxy S21 FE would be sold in four colors, namely gray, white, light green, and light violet. As for the design and appearance, the S21 FE looks like a mix of the Galaxy S21 and last year’s Galaxy S20 FE.