Microsoft is hard at work on its second Android smartphone, the Surface Duo 2. The dual-screen phone could arrive in October packing all-around improvements over its predecessor. Ahead of that, the device has appeared in benchmarking platform Geekbench confirming a couple of key improvements.

Per the Geekbench listing, the Microsoft Surface Duo 2 will feature an octa-core processor with one prime core clocked at 2.84GHz, three middle-cores at 2.42GHz, and four power-efficient cores at 1.8GHz. The source code of the listing further reveals an Adreno 660 GPU. This clearly indicates the Qualcomm Snapdragon 888 SoC. Well, we’ve been hearing it of getting this Qualcomm processor but it’s now confirmed.

Snapdragon 888 marks a major upgrade from an outdated Snapdragon 855 chipset the original Surface Duo featured. Microsoft could have done even better by including the Snapdragon 888+ but we aren’t complaining.

The Surface Duo 2 will also seemingly get 8GB of RAM, at least in one variant. The first-gen model topped at 6GB of RAM, so that’s another notable upgrade from Microsoft. The upcoming device will run Android 11 out of the box, so it better arrive sooner than later as Android 12 is about to go official in a few weeks.

The Geekbench entry doesn’t reveal anything else about the Microsoft Surface Duo 2. But we’ve been hearing about this phone for several months now and it’s shaping up to be quite an upgrade. With Snapdragon 888, the device will support 5G connectivity, something that was missing on the original Surface Duo.

A recent leak revealed that the upcoming device will feature three cameras at the back. If you remember, the first-gen Surface Duo only featured one camera on the entire unit — an 11-megapixel sensor at the front. There was no rear-facing camera at all. So that’s one more major upgrade, we’d say.

Microsoft has plenty to improve with the Surface Duo 2

Apart from the processor and cameras, the second-gen Surface Duo needs improving in plenty of other areas as well. For a dual-screen phone, the original model featured a paltry 3577 mAh battery with just 18W of fast wired charging. It didn’t offer wireless charging. It also lacked an NFC chip and topped out at just 128GB of onboard storage without support for a MicroSD card in some regions. That’s not justifiable for a phone that costs as high as $1,500.

The original Surface Duo also seemingly made a lot of durability compromises as there have been many reports of issues with its hinge, display, camera, and charging port. Hopefully, Microsoft will look into this matter as well with the Surface Duo 2. With the device rumored to break cover in October, you can expect to hear more about it in the coming weeks. 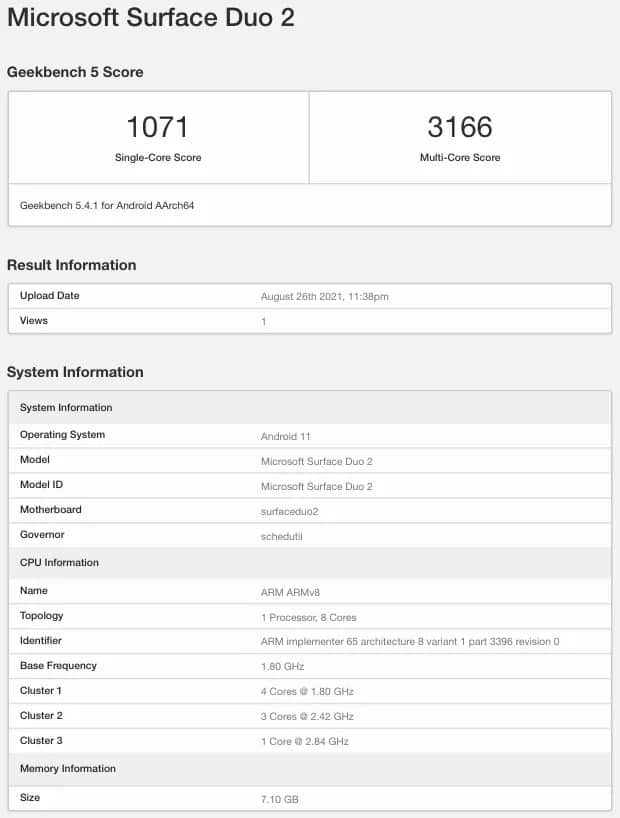