Lenovo is one of the very few OEMs that make high-end Android tablets. The company now seems to be preparing to further bolster its portfolio with a new model. An unannounced Lenovo Tab P12 Pro recently appeared on Google Play Console and Google Play Supported device list with model number TB-Q706F. The former listing revealed some of the key specs of the device and they suggest we are in for quite a powerful Android tablet from the Chinese brand.

First up, the Lenovo Tab P12 Pro features a Qualcomm Snapdragon 855 processor. It isn’t the best SoC Qualcomm has to offer but is still capable enough to put the new tablet among the best Android tablets available currently. Last year’s Tab P11 Pro, for instance, featured the Snapdragon 730G mid-range processor. So it’s quite an upgrade from Lenovo.

The company is also offering 8GB of RAM with the new tablet, at least with one of the variants. That’s another major upgrade from a maximum of 6GB RAM that the Tab P11 Pro got.

The display seemingly remains unchanged though. The Google Play Console listing suggests the Lenovo Tab P12 Pro screen will have a resolution of 1600×2560 pixels, the same as its predecessor. It’s unclear though whether it keeps the same 11.5-inch display or Lenovo will make some changes on that front. The upcoming tablet will run Android 11 out of the box, which would be disappointing if it doesn’t arrive within the next couple of months. Android 12 is just around the corner.

That’s pretty much it when it comes to Lenovo Tab P12 Pro specs known so far. We could hear more about it in the coming weeks as the company prepares for its market introduction. 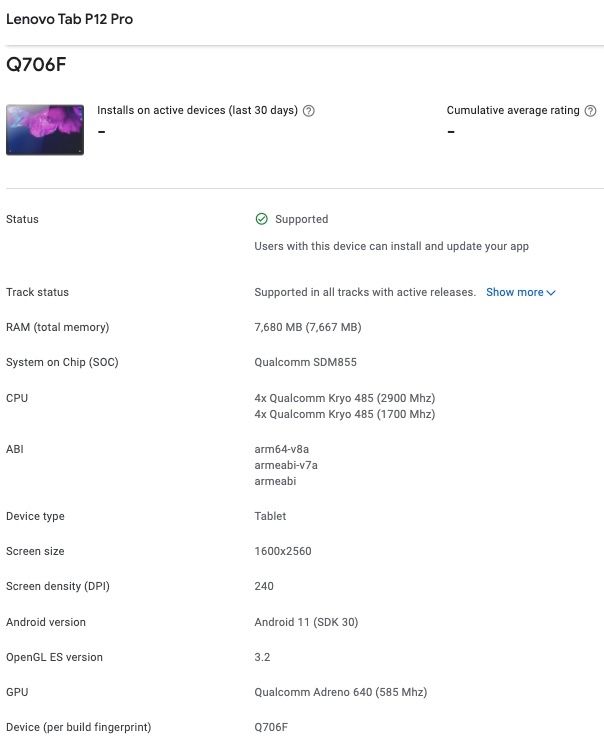 Customers who want a high-end Android tablet today don’t have much choice. There simply aren’t many devices up for grabs. If you want the very best, you have to go for Samsung’s latest Galaxy Tab S series. Hands down, they are the best Android tablets money can buy right now. No wonder the Korean firm is the biggest Android tablet vendor in the world.

But Lenovo is emerging to be a worthy competitor lately. The Tab P11 Pro isn’t quite a pro-grade tablet but it helped the company boost its market share. The Chinese brand was the fastest-growing tablet vendor in Q2 2021, a recent Strategy Analytics report showed. It registered a 67 percent YoY growth, compared to Samsung’s 19 percent. The upcoming Tab P12 Pro seems to be a more powerful offering from the company, something that could actually give some competition to Samsung’s Tab S series.

That said, you can bet on Samsung to up the ante in this regard as well. The Galaxy Tab S8 series, which could arrive early next year, will likely use Qualcomm’s latest and greatest Snapdragon 895/898 processor. The premium model, i.e. Tab S8 Ultra, is said to sport a 14.6-inch OLED display with a 120Hz refresh rate. It could also get a massive 12,000mAh battery. You can expect notable upgrades in other areas as well.

This should only encourage Lenovo to further up its game though, which ultimately benefits consumers. It now remains to be seen if the company can come any closer to Samsung in the flagship Android tablet market.